Should Comic Relief pay their interns?

GRADUATE FOG ASKS THEIR HEAD OF PR ‘DO YOU GET PAID TO DO YOUR JOB?’

Graduate Fog is aware that picking fights with a charity is not a good look.

Especially one that’s as well-known (and well-loved) as Comic Relief.

Since Graduate Fog launched in April 2010, we have exposed unpaid internships at various private companies, both big and small. But we have not talked much about what is happening in the charity sector.

The only exception to this has been our coverage of the James Caan Foundation’s decision to hire unpaid interns, a story which is now one of Graduate Fog’s most read stories ever.

Comic Relief is currently advertising for a ‘broadcast intern’ to work at their head office for three months, paid expenses only. Here is the ad, which appears on Comic Relief’s own website:

If you have an interest in broadcasting and experience of working in a busy office, you could be part of the team delivering the film content for Red Nose Day 2011!

Working full time from January to March 2011, you’ll get involved in all aspects of working on a high profile campaign for a well-known brand. From supporting our video production (acting as a runner, assisting on film shoots, sourcing props) to monitoring relevant broadcasts and handling admin, you’ll be at the heart of the production of one of the best-known events in the UK.

Bring us your passion for broadcasting and proven MS Office, organisational and communication skills and we’ll provide a CV-enhancing opportunity that will give you a great insight into the world of TV and video production.

There follows a detailed role description which is too long to include here in full, but includes these tasks:

Now, I know that Comic Relief is a brilliant charity that does lots of fantastic work to end poverty. And my understanding is that where internships happen in non-profit or charity organisations, they need not be paid, as these can be classed as ‘volunteer workers.’

I also understand that this exception to the NMW laws was originally designed to protect genuine volunteering (working in your local soup kitchen etc).

But I do want to raise this question, because I think it’s important:

Are some charities taking advantage of young people’s desperation to gain experience by labelling junior jobs as ‘volunteer’ roles — when they should in fact be paid?

I emailed the Comic Relief press office to raise my concerns. This is what happened:

My name is Tanya de Grunwald and I run a graduate careers advice website called Graduate Fog.
I am surprised to see that you are openly advertising for an unpaid intern to help you at Comic Relief
http://jobs.comicrelief.com/vacancies/60/Mandy/broadcast_intern/central_london/

As we all know, unpaid internships have become commonplace. However, it is my belief that they are ethically dubious – and their legal status is unclear. My understanding is that there is currently a loophole in the law designed to protect genuine volunteering for charities – but it is my belief that this is being exploited by many large charitable organisations simply looking to cut their costs at the expense of their most junior members of staff.

Your ad goes into great detail about the experience and skills required and as such, in my opinion, the role that you describe in your advertisement is not one of a true charitable volunteer. This part is particularly telling:

“You will receive full training and support, and experience of working on a busy campaign for a national charity brand. You will be a highly motivated individual, possibly a recent graduate, looking for your first step into a TV and video production career.”

– as it makes clear that you are fully aware that the people most likely to apply for this role will be doing so to improve their CV and further their career, and not because they genuinely wish to donate their time to Comic Relief for free. As such, it is my belief that it is only right that this role should be paid at least the NMW.

Even if we set your legal obligations aside for a moment, does Comic Relief not agree that unpaid internships exploit those who do them – and exclude those who can’t afford to do them? Your use of unpaid interns seems at odds with everything that Comic Relief is supposed to represent. Frankly, I would expect your organisation to be more careful about being seen to take advantage of young workers like this. Do you not agree that you are effectively only offering this career opportunity only to those who can afford to work for free, thereby excluding those who can’t afford this ‘luxury’?

I will be blogging about this later in the week and would be very grateful if somebody from your organisation would care to comment on this at your earliest convenience? Are you willing to reconsider your position and turn this role into a paid opportunity?

A few days later, this reply came from their Head of Media and Public Affairs:

Thanks for your enquiry into the volunteer internships at Comic Relief.

Please find below our statement in response.

Volunteering at Comic Relief is a great way for people to donate their time and skills to a good cause. The roles offered, many of which are part of an internship programme, are in addition to, not a substitute for paid positions and are organised fully within the law.

As a charity that promises to donate every pound raised directly from the public to the projects we fund, we are extremely grateful for the support, time and commitment of our volunteers. The office based work they undertake such as fundraising, marketing and media are all vital in working towards our vision of a just world free from poverty.

Thanks for this. Can I just confirm that your own role is paid? If it is, would you be happy to do it for free?
Tanya

As explained in the statement provided the volunteer roles offered are in addition to, not a substitute, for paid positions.

Thanks for this, but I’m afraid I’m struggling to understand your logic.

Because your ad states:

From supporting our video production (acting as a runner, assisting on film shoots, sourcing props) to monitoring relevant broadcasts and handling admin, you’ll be at the heart of the production of one of the best-known events in TV.

…which sounds to me like this internship is a role made up of jobs that your (paid) team needs to be done.

I would also like to question whether you feel it is appropriate to label runners / admin assistants as ‘volunteers’, alongside those who shake buckets for Comic Relief outside their local chemist – when it is clear that their motivation is likely to be very different. Do you really believe that the people who apply for this internship will be true ‘volunteers’, honestly looking for a way to give back to society?

Because I have to say, I don’t – and I don’t think you do either. I feel that the following paragraph in your ad suggests that you are acutely aware that the people who apply for this job will not be ‘volunteers’ in the true sense at all – as you take great care to underline how beneficial this internship will be for their CV:

Bring us your passion for broadcasting and proven MS Office, organisational and communication skills and we’ll provide a CV-enhancing opportunity that will give you great insight into the world of TV and video production.

What I am questioning is whether you feel that it is ethical for you to take on desperate young staff, to do proper work – and not pay them? And whether you agree that this is particularly inappropriate given Comic Relief’s aims in line with helping underprivileged youngsters? And surely you agree that those young people who cannot afford to work for free for three months will be excluded from this ‘CV-enhancing opportunity’? Do you feel that is in line with Comic Relief’s ethos?

I would also like to repeat my earlier question about whether you yourself get paid to do your job at Comic Relief?

Please refer to the previous statement provided in response to enquiries on our internship scheme.

What do you make of that?

Here is what I think, about unpaid internships in the charity sector:

When I give to charity, I understand that not every penny of my money will go directly to those in need. I understand that charities — like any organisation — have running costs. And I understand that paying their staff (at all levels) is one of those costs. I am not comfortable with the suggestion that that it is their donors’ agenda which is preventing their young staff from being paid the wage they deserve.

I do not want people working for charities to be over-paid for their expertise — but I am happy for them to earn a fair wage. I understand that they — like all of us — have bills to pay and I do not expect them to work for free. Last year, Comic Relief raised £80,000,000 from Red Nose Day alone. A junior admin assistant would be paid what, £16k?

From what some of you lot tell me about your experiences, I am concerned that interns working in the charity sector are being made to feel that asking for (or expecting) a wage for their hard work in what is clearly a proper role is a declaration of greed — and a sign that they are not cut out for a career in the industry. I think this is unfair.

I am seeing some evidence that senior staff within charities appear to have ‘double standards’ when it comes to pay. Why do they get paid a reasonable salary, but interns get paid nothing at all? Comic Relief are currently recruiting for two Communications Co-ordinators paying £34,000 each, which I understand is a very fair salary for this kind of role. Why are junior staff members expected to work for zero?

I am concerned that the line between junior admin roles and volunteering is being blurred to suit the agenda of charities which are keen to keep their costs down. I do not believe that the person who takes this role at Comic Relief is a true ‘volunteer’. Of course they want to do good work for good causes, but their number one reason for being there is for their CV. That’s okay – but that’s not a ‘volunteer’.

I am worried that the issue of unpaid internships within the charity sector is being hushed up, because it is an uncomfortable conversation to have — and nobody wants to be seen to attack organisations that do so much good work.

As I said at the start of this post, I am well aware that picking a fight with the charity sector is not a good look. But I honestly believe that this is an important issue that deserves discussion…

Decide for yourself – you can see the original ad for this ‘broadcast intern’ role here: 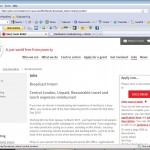 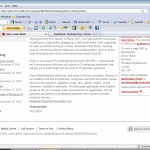 *Should Comic Relief pay their interns?
Or do you think the good work done by charities means they should be exempt from a legal obligation to pay their junior staff?