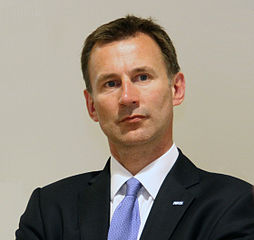 The Culture Secretary Jeremy Hunt is advertising for multiple “constituency interns”, paying travel expenses only. The roles are targeted at recent graduates and involve “assisting the Caseworker with constituency casework, assisting with surgeries and helping with the day to day running of a busy office.” The internships are full-time and appear to last for three months.

When we wrote to Mr Hunt’s office to draw attention to this, his spokesperson appeared unflustered, insisting that Mr Hunt is “extremely proud” of his use of unpaid interns. But should he be? The advert – posted on the job website w4mp – states:

We are looking for interns to assist with Jeremy’s constituency work full time for three month periods during 2012. This would suit a graduate or someone looking to gain experience in Parliament.

We have the following vacancies:

– Have graduated or be due to graduate next summer.
– Have a good telephone manner and possess outstanding written skills.
– Demonstrate that they are capable of multi tasking and show a willingness to complete work quickly and to a high standard.
– Also be sympathetic to the aims of the Conservative Party.

The role involves assisting the Caseworker with constituency casework, assisting with surgeries and helping with the day to day running of a busy office.

Please note this will not involve any work related to his brief as Secretary of State for Culture, Media, Olympics and Sport. Guidance and training will be provided throughout.

And it seems this is not the first time that Mr Hunt – educated at exclusive private school Charterhouse – has advertised for an unpaid intern. A quick Google search revealed another advert, dating back to March 2011:

Wanted: A part time intern based in Westminster for Rt Hon Jeremy Hunt MP, Member of Parliament for South West Surrey and Secretary of State for Culture, Olympics, Media and Sport

We are looking for an intern to assist with Jeremy’s constituency work for two days a week for a period of three months. This would suit a student or someone looking to gain experience in Parliament.

We think the internships described in both these adverts sound like proper jobs that should be paid. So we wrote to Mr Hunt’s office to ask why he wasn’t paying a salary for these roles:

I am writing to ask about the advert currently posted on the website w4mp in which Jeremy Hunt MP appears to be recruiting for a number of unpaid interns to assist in his constituency office:
http://www.w4mpjobs.org/JobDetails.aspx?jobid=31943

I have also found an older advert (from March 2011) for another part-time internship with Mr Hunt, based in Westminster:
http://www.w4mp.org/html/personnel/jobs/disp_job.asp?ref=28742

Although we all know that the practice of unpaid internships has become widespread, it is highly unusual to see a high profile individual such as Mr Hunt recruiting for one so openly.

As such, I have a few questions I would be grateful if you could answer on Mr Hunt’s behalf:

– Can you confirm that at least one Westminster intern was hired by Mr Hunt through this advertisement in March and has been working for him in a role matching the description in the advert?

– I am also interested to hear how Mr Hunt feels all these positions fit with the National Minimum Wage law, which states that anybody who fits the criteria of being a “worker” must be paid at least the NMW (£6.08 for over 21s). Since these positions appear to involve real work that is of value to Mr Hunt and his team, I am unclear as to why Mr Hunt feels they should not be paid?

– Now that I have drawn your attention to the fact that these internships are unfair, will Mr Hunt consider making them paid opportunities?

I will be blogging about this tomorrow so would be extremely grateful for a swift response from you.

With very many thanks in advance,

Half an hour later, she wrote back:

Please find attached a comment on internships in this office.

Attached was a Word document, which read:

“Due to widespread demand, internships are offered in Jeremy Hunt’s office to those who are looking for the opportunity to get hands on work experience and an insight into the world of politics.

“Expenses are covered for all internships so they are open to as many people as possible and guidance and training is provided throughout.

“The office enters in to an intern volunteer agreement as set out by the Independent Parliamentary Standards Authority. Jeremy Hunt’s Office is extremely proud of its track record of assisting previous interns in finding full time employment at the end of their three month internship”

She is referring to guidelines by the IPSA, which ruled in March 2010 than MPs needn’t pay their interns if they don’t fancy it. At the time, Intern Aware co-founder Ben Lyons said:

“The IPSA ruling is deeply disappointing. These reforms were supposed to be about cleaning up our politics, but they will have the effect of making our political class even more unrepresentative.

“Internships are an often crucial first step on the ladder in modern politics. Our politicians spend a lot of time talking about the importance of having a representative parliament. This will not be achieved if the only people who are able to enter politics have to work for free.

“Currently interns are being treated as employees, without their rights or, crucially, their wages. We risk a ghost generation of political leaders. Our democracy will be severely weakened if only those who can afford to work for free can gain the necessary experience for to enter public life.”

Unfortunately, Mr Hunt seems to disagree. Sadly, he seems to be one of the many people who view months of unpaid ‘work experience’ (which looks exactly like a proper job) as part of the solution to youth unemployment, when we see it as a large part of the problem.

So there you have it. Apparently it is absolutely fine for a Cabinet minister to hire multiple young employees for months at a time, and not pay them a penny for their work. What a delightful country we live in.

*Should Jeremy Hunt be ashamed of himself?
His behaviour may be allowed by IPSA, but is it morally right? Do you agree that unpaid internships are damaging for our society – especially within politics? If they are not stamped out, what do you think Britain’s political landscape will be like in ten years’ time? Will this be a country you will want to live in?