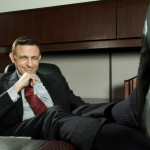 Bosses at some of the UK’s biggest companies have already earned more than most graduates will make in the whole of 2014 – after just two days in the office.

By mid-morning today – dubbed “fat cat Wednesday” – senior executives with many FTSE-100 companies who returned to work on Monday will have earned more money than those on the average annual wage of £26,000 (far above what many graduates are making).

The fact – calculated by the High Pay Centre – is a shocking reminder of the widening pay gap between senior and junior staff at UK firms. Stats show that the average FTSE-100 chief executive was paid almost £4.3million per year – equivalent to more than £1,000 per hour.

“When top bosses take home more in two-and-a-half days than the average worker earns in a year, there is clearly something wrong with the way pay is set for both bosses and workers.”

Meanwhile, the CBI – which champions the interests of business – appeared to defend giant salaries, as long as they’re deserved (?!) saying:

“High pay should always be associated with high performance.”

Graduate Fog is not naive – we know that top bosses earn big salaries. However, we think it would be foolish of them to ignore the impact that such a wide pay gap has on the morale of their junior staff. Many interns earn no wage at all. And although the official average salary for the big graduate schemes is £29,000 per year, we think most graduates earn far less than that in their first job after uni. When junior staff are struggling on low salaries, news of that their bosses have earned their entire yearly wage in two and a half days is tough to take.

*HOW DOES “FAT CAT WEDNESDAY” MAKE YOU FEEL?
Is it fair that senior executives earn so much more than junior employees? Do you know how much your boss earns? Should the wealth be shared out more evenly among staff at successful companies? What impact does the pay gap have on morale among those just starting out in their careers? Is it inspiring to think you could one day earn that much? Or demoralising to know that you probably never will? Have your say below!