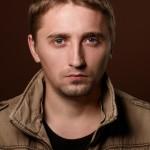 Poundland has denied using unpaid workers to stack shelves in its stores, directly contradicting a source who has told Graduate Fog that he and nine others are currently working for free in the chain’s Bolton store, in placements set up by his local job centre.

This website has spoken to Billy (not his real name), a recent graduate from the University of Central Lancashire, who says he has been told by his local job centre that he must work for free at the discount retailer for 30 hours a week for six weeks. Billy and nine others are required to wear black, unbranded polo shirts, black trousers and black shoes when working in Poundland’s stores, all provided by the job centre.

Of 10 unpaid workers at that store, Billy says eight are under 25 years old. One of the older pair has 27 years’ experience as a teacher. All are on the DWP’s ‘Work Experience Programme’. Billy told us:

“I was so excited to graduate from university but, one month on, I’ve never felt so low. Having struggled to find paid work, three weeks ago I signed on to Universal Credit, and I’ve been told to do unpaid work experience stacking shelves at Poundland. There are 10 of us in our branch working 30 hours a week, and none of us is being paid a penny by Poundland. I hate it and have no idea what this is supposed to be teaching me. I’m not learning anything and I can’t work out why taxpayers are subsidising my unpaid work for a hugely profitable company.

“I don’t have a set schedule. They just literally tell me to come in. Monday 26th June was my first day, I worked from 2:30-8:30pm. There were five of us in total. Once we completed the day we were told to come in again on Wednesday from 2:30-8:30pm. It’s not set hours and days but we have to do 30 hours a week for 6 weeks. We have been given black polo shirts to wear during our shifts. They’re the exactly same as the uniform the regular Poundland staff wear, but without the Poundland logo.

“I am keen to get on and apply for a jobs in my chosen industry, but working for nothing is so demoralising that it’s hard to stay motivated. I can’t understand how the politicians think unpaid work is a solution to youth unemployment. The quality of these placements is poor and they lead nowhere. Those of us who do them end up exhausted and miserable, and I suspect we’ve probably replaced a few paid workers too, who will be missing out on the shifts we now cover. Meanwhile, Poundland must be laughing all the way to the bank. The scheme needs shutting down. The only people benefiting from it are Poundland.”

Since graduating this summer with a 2:1 in Film and Media Studies, Billy has been living at home with his dad, who has bipolar disorder, his mum, who is a carer, and his brother who is also looking for work. The whole family is struggling financially and Billy says: “We all feel trapped”.

Last week, Graduate Fog wrote to Poundland, to ask what was going on:

My name is Tanya de Grunwald and I run the UK careers website Graduate Fog. As well as offering careers advice to young job seekers, the website is known for campaigning for fair pay and access to good jobs.

It has come to my attention that Poundland has a number of unpaid staff members working at your stores. I understand that these workers receive no pay at all from Poundland, on the grounds that they are referrals from local job centres, and they are recipients of the new Universal Credit.

Please can you confirm:

1) How many unpaid staff members (job centre referrals) you have had in Poundland’s UK stores to date, and how many hours of unpaid work they have completed?

2) How many unpaid staff members (job centre referrals) you currently have working at Poundland’s UK stores?

3) Why exactly Poundland feels it is entitled to free labour from these individuals, subsidised by the UK taxpayer?

Yesterday, a spokesperson from Poundland replied, ignoring most of our questions but supplying some information at least:

“We don’t have any unpaid staff members and don’t receive any free labour.

“There are over 400 national partners, including small and independent companies, where a local Job Centre Plus recommends a claimant may benefit from work experience to enhance employability skills, we will try and help, but only under the specific proviso that those are not part of the store schedule.

“For 5 years since we started the Work Experience Programme, we have helped one person, per store, per year. As a result this has given people a short stint of work experience that’s helped them get back into permanent work, whilst giving them fantastic work experience in a diverse retail environment. We think that’s something to be proud of.”

So it sounds like Poundland is directly challenging Billy’s claim that he is one of 10 unpaid workers in their Bolton store. Or Poundland doesn’t know they are there, which is also pretty shoddy. And if Billy is being asked to work 2.30 – 8.30pm, that certainly sounds like a “store schedule” to us. Hmm. We have also been in touch with the DWP (Department for Work and Pensions), to try and clarify what’s going on. A spokesperson said:

“Work Experience Programme: they are voluntary. They are by their nature there to see if someone can benefit from getting additional work experience. But it wouldn’t be the case that if they said no there’d be any sort of repercussion for their UC [Universal Credit] payment.

“I’d be interested to know is it [the job centre] saying that the person says if they don’t do this there will be repercussions?

“If you’ve got a case where that breaks from that then please flag it.” 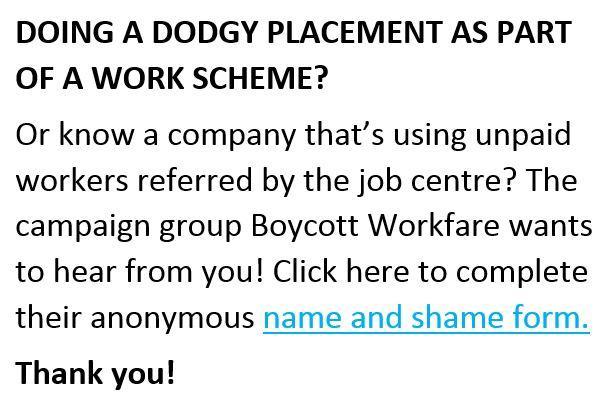 This confirms that the DWP feel confident that unpaid work placements are allowed on schemes – as long as it is made clear to the participants that they are voluntary. But in Billy’s case this has NOT been made clear, which may mean rules have been breached. Billy insists he was not told the Poundland placement was optional, and he was very much under the impression his Universal Credit would be cut if he didn’t complete it. So at the very least, it appears there is a problem here with communication from at least one job centre.

It also seems that we are back where we started – with a Government that shunts job seekers in to shoddy quality placements like this, failing to inform them they are voluntary, while the taxpayers fund their benefits, the job seeker is miserable and learning nothing, and companies like Poundland profit from free labour.

Perhaps we shouldn’t be surprised. After all, the DWP is now headed up by David Gauke, an appointment which shocked many young people as he himself is a past recruiter of unpaid interns. And we know that we have a Government that actively encourages employers to pay young people less than older people for doing exactly the same job. But Graduate Fog remains baffled by the logic of these unpaid placements. Tell us again how this grotesque distortion of the traditional employer-employee relationship teaches young people anything useful about the value of work? And why should anyone work for Poundland for free?

NOTE: This post has been edited slightly since it was first published, to correct a number of legal assertions that we’d got nearly-but-not-quite right. Our sincere apologies, and thanks to Boycott Workfare for their help fixing this. Some of this stuff is very complicated.

* DOES UNPAID WORK LIFT PEOPLE UP – OR BRING THEM DOWN?
Have your say on this story below…

PSSST…. Are you doing unpaid work as part of a Government scheme, for Poundland or any other employer? Contact us here to tell us more about it. (Anonymity guaranteed, of course).