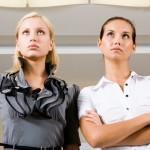 A flagship graduate programme at the controversial outsourcing firm Capita includes up to 16 weeks of compulsory unpaid training, Graduate Fog can exclusively reveal. The scheme – which appears to be structured to minimise recruitment costs for the firm – has been called “a new low” for graduate employers.

It is unclear how the firm expects participants on the Capita Novus graduate programme to survive without a salary during their four months of training, which takes place in London and Manchester. 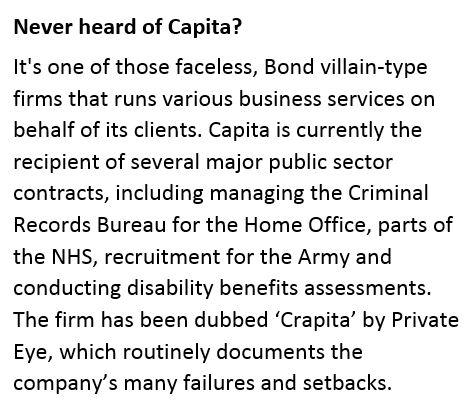 When challenged by Graduate Fog, a Capita spokesperson appeared unconcerned that such a lengthy unpaid period risked putting off applicants from poorer backgrounds, even boasting that the training was ‘free of charge’. (Yes, they’re pitching this as a generous offer. We’re still wrapping our brains around that one too). Here is the advert: 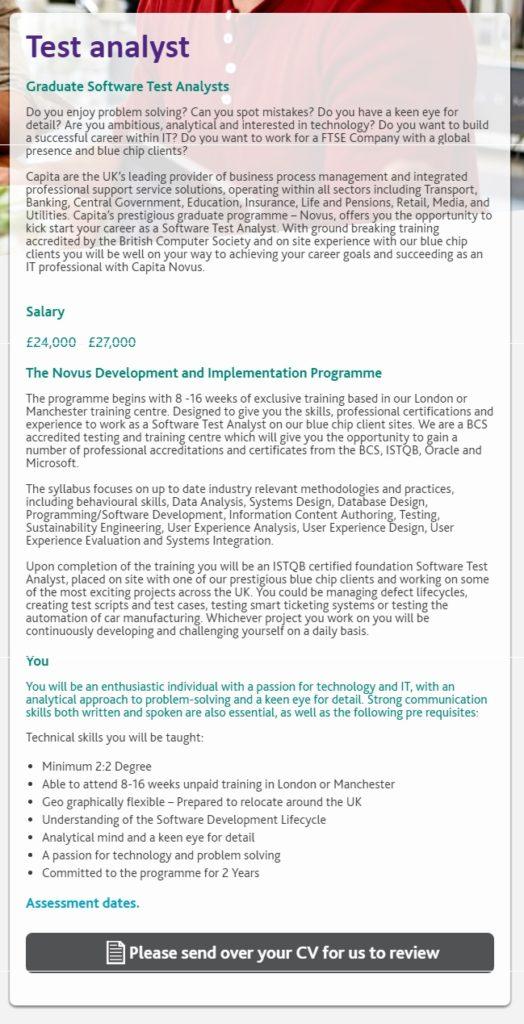 Graduate Fog is deeply suspicious of the Capita Novus graduate scheme – and a top barrister specialising in employment law has echoed our concerns. Although the bizarrely structured programme appears to comply with National Minimum Wage (NMW) law as the training happens before the graduates’ official contract starts, the lawyer told us he has never heard of anything like it, and called it “a new low” for graduate employers.

He added: “It is a pretty unattractive policy which gives Capita all the advantages. The training provided ‘free of charge’ benefits the company and no doubt gives them a chance to decide who they want to keep on.”

Here’s what happened when Graduate Fog challenged Capita over their Novus graduate scheme:

I run the careers website Graduate Fog. One of my readers has alerted me to the fact that adverts for the Capita Novus graduate programme state that the scheme includes up to 16 weeks of unpaid training.

I would be grateful if you could please explain:

1) How Capita feels this fits with the UK’s National Minimum Wage law?

2) How Capita expects successful candidates to support themselves during this training period?

3) Why Capita appears to show no concern that applicants from less well-off backgrounds are likely to be highly anxious about the prospect of having to support themselves during such a long training period, whilst not receiving a wage?

A swift response would be much appreciated.

Please see below for our line:

A spokesperson for Capita IT Resourcing, said: “The Capita Novus IT skills programme equips people with industry based training and transferable skillsets within the Skills for the Information Age (SFIA) framework. The training provided is free of charge with a combination of classroom and distance learning. The course is designed to allow the participants to continue undertaking work and other activities outside of the free training. The objective is to bridge the gap between graduate-level experience and the requirements of employers, enabling graduates to overcome barriers and enter a sector with high opportunities for career progression. Once the training has been successfully completed Capita secures roles for the majority of participants across a wide range of organisations, including Capita itself.”

Still confused? We were too – so we wrote back:

However, I am still a little unclear as I have never head of anything like this before.

This bit: “Once the training has been successfully completed Capita secures roles for the majority of participants across a wide range of organisations…”

Also, should I assume 1) Capita feels confident that the structure of the Novus programme is entirely compliant with UK NMW law? And 2) that Capita is not concerned that it could put off candidates from poorer backgrounds? (I notice your spokesperson has not responded to those aspects of my original enquiry.)

The spokesperson then tried to speak to us on the phone, but we said we’d prefer to stick to email to avoid confusion. We then received this (Capita’s answers in bold):

In response to your questions:

>The programme is the training.

This bit: “Once the training has been successfully completed Capita secures roles for the majority of participants across a wide range of organisations…”

> There is no guarantee of a job but the majority of people who successfully complete the course are placed in a role.

Also, should I assume 1) Capita feels confident that the structure of the Novus programme is entirely compliant with UK NMW law? And 2) that Capita is not concerned that it could put off candidates from poorer backgrounds? (I notice your spokesperson has not responded to those aspects of my original enquiry.)

This is a training course, not employment.

Wait… WHAT? So this ‘graduate programme’ isn’t even a job? Exasperated, we wrote back one last time:

So graduates do 2-4 months of unpaid Capita training, and then Capita decides whether to offer them a job (which pays £24-27,000) after that. Have I understood that correctly?

If so, can you explain the reference to being ‘committed to the programme for two years’? What happens after that – do the graduates still have a job or is this just a two year contract? And which bit is the programme – the unpaid training bit, the rest of the two years, or the whole thing?

I have to say, this is one of the most bizarre, complicated and unclear ‘graduate programmes’ I have ever seen or heard of. Why can’t Capita select successful candidates up front and then pay them while you train them, like any other big graduate employer? Is it just a way to duck out of paying people while they train to work for you?

I am also extremely surprised that you are not more concerned about the number of graduates who will be put off from applying by the prospect of having to fund such a long period of unpaid training.

I would recommend calling me to explain.

This is not a graduate scheme. It is a training programme, after which the majority of people will be placed in a job on a two-year contract  — most of these jobs are not with Capita, but with other employers.

“However Capita tries to frame it, the structure of their graduate scheme is bizarre — I’ve never seen anything like it.

“Rather than recruiting graduates and then training them as salaried employees, they appear to be training them as non-employees and then choosing whether to recruit them, presumably because it is cheaper. And dressing this up as a generous ‘free of charge’ opportunity really takes the biscuit.

“A cynical observer might say this is Capita doing what is does best — ruthlessly minimising its own costs, whilst staying just inside the law. The losers, of course, are the graduates, forced to fund themselves during this period, gambling on the hope that they will be one of the lucky ones hired by Capita at the end of their training. Living in London or Manchester for four months is likely to cost them around £4,000.

“What is surprising is Capita’s casual disregard for fair access. Nowadays, most big UK employers are desperate to improve the diversity of their graduate intake, and know that such long period of unpaid training risks putting off applicants from poorer backgrounds. That Capita appears not to understand this — or not to care — suggests they don’t understand today’s recruitment landscape as well as they think they do.”

* SHOULD CAPITA PAY ITS GRADUATES WHILE THEY TRAIN TO WORK THERE?

Or is it reasonable for an employer to offer graduates ‘free of charge’ training before they decide whether to hire them? Post your thoughts and comments below… 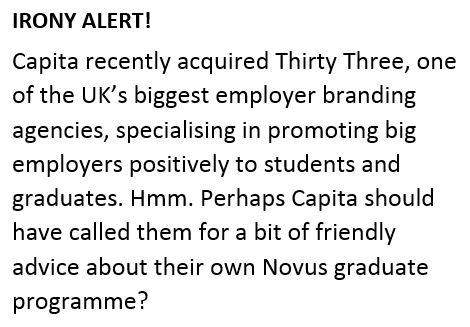