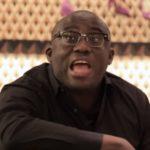 WHOOP! STORY PICKED UP BY THE GUARDIAN!

When Edward Enninful became the new Editor of British Vogue, he promised to open up the fashion industry to fresh talent from all backgrounds. At the launch of his first issue, which championed diversity, Enninful said: “My Vogue is all about being inclusive.”

But now he faces an official investigation after Graduate Fog uncovered evidence that suggests several young people are currently working at his magazine for free, on four-week placements Vogue’s website calls ‘work shadowing,’ Vogue’s staff call ‘work experience’ and we call… ‘an unpaid junior fashion job you can only do if you can somehow survive in London for a month on no money’.

Our evidence suggests that far from being just shadowing (observing), British Vogue’s four-week placements — based at Vogue House, in central London — involve “assisting the teams with multiple and varied tasks” that would need to be done by a paid member of staff if this person wasn’t there.

This includes transcribing interviews and calling samples from top fashion designers who lend clothing to Vogue for photoshoots. It also appears that articles pitched and written by these unpaid individuals could appear on Vogue’s website, for no additional pay. 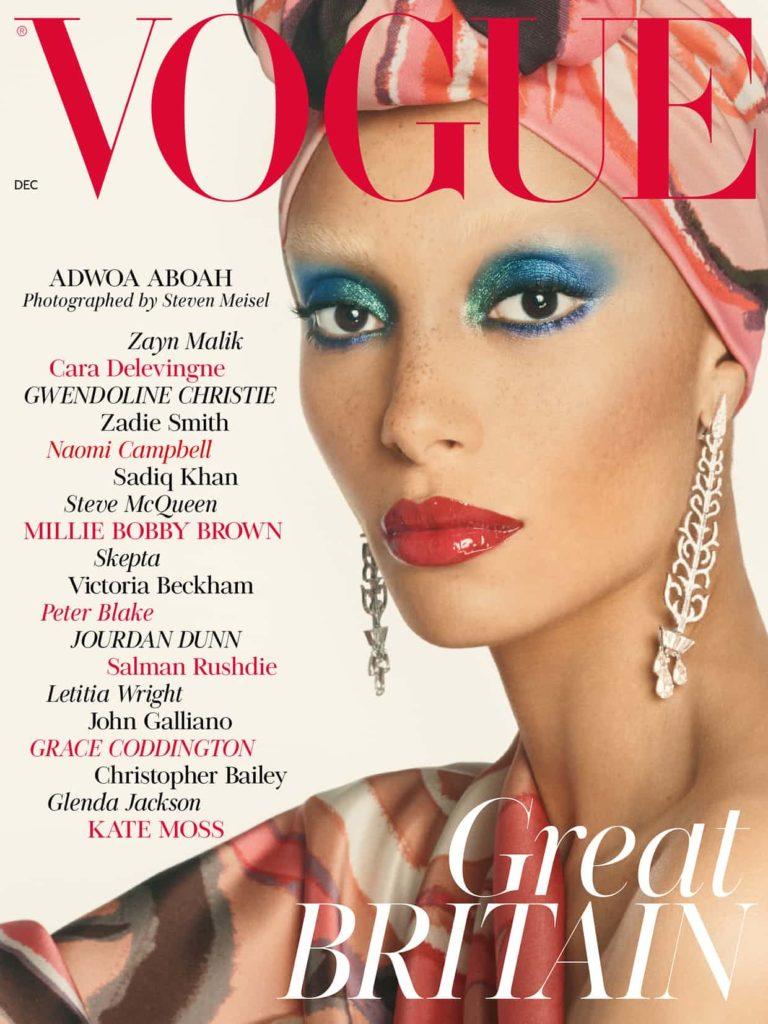 When questioned about the roles, a senior member of British Vogue’s staff denied that the placements involve real work, and proudly told us that they often lead to paid jobs at British Vogue, apparently not realising that that’s the whole problem.

Frustrated by the fashion world’s refusal to ditch unpaid internships after many other industries have accepted that the practice is toxic, Graduate Fog’s founder Tanya de Grunwald has passed our evidence to HMRC to investigate. As Vogue’s parent company Conde Nast was shamed back in 2015 for dodging its responsibility to pay the minimum wage, the firm could face a sizeable fine if it’s found to have repeated the offence.

But, back to the beginning — what evidence do we have? Well, we have seen a chain of emails between the British Vogue staffer who organises the work placements, and a Graduate Fog reader who inquired about availability. Appearing not to understand the implications of what she was saying, British Vogue’s Editorial Co-ordinator (who we won’t name here as she’s probably quite junior and it’s not her fault) wrote to our reader:

Successful applicants would be shadowing our Editorial Team – Features and Fashion Features team, assisting the teams with multiple and varied tasks such as transcripts, calling in samples for imagery and so on.

Wondering how someone can simultaneously, “shadow” and assist, transcribe and call in samples, our reader asked her to describe a typical day. Vogue’s Editorial Co-ordinator replied:

I cannot guarantee what a typical day would be like as every day is different and you will be given tasks by different members of the team.

However, you would be assisting the Fashion Features team – calling in images, helping with finalizing the FOB [front of book] pages for the magazines.

You would also be helping the Online team with online content – everyone is always welcome to pitch ideas and write, however it is up to the online team of course to decide whether they post it online.

You would also be helping the Features team with transcripts, interviews etc.

The work shadowing placements run for four weeks and are unpaid (however travel is expensed).

… and attached a questionnaire, in which the placements were again called ‘work experience’ (not shadowing). The nature of the questions suggested this was some kind of screening tool, which is unusual for a placement that really is just observing: 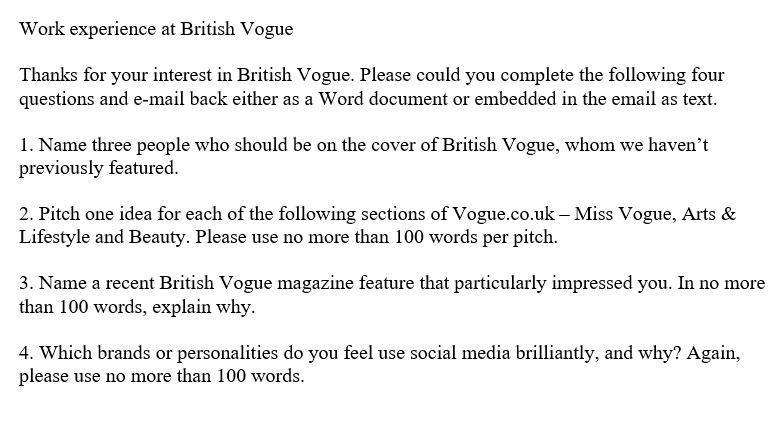 Graduate Fog understands from another source (an insider at British Vogue who is uncomfortable about the practice) that those on unpaid work placements almost always work the same hours as other staff: 9.30am to 5.30pm.

The current employee said there are “several” unpaid interns working at any one time, across British Vogue’s features, fashion, beauty and online desk.

Concerned that this work shadowing / experience was sounding increasingly like the role of a ‘Worker’ (which, by law, must be paid at least the National Minimum Wage), we wrote to a more senior member of staff at British Vogue, Managing Editor Mark Russell:

Although the Conde Nast website states that these last 2 to 3 weeks, and are merely ‘work shadowing’, it seems that these placements in fact last 4 weeks and involve successful applicants doing much valuable labour which directly benefits Vogue and Conde Nast.

I also understand that the people doing these placements work the same regular hours as Vogue’s paid staff (typically 9.30am to 5.30pm) and that there are several people on unpaid work placements at Vogue at any one time, including on the features, fashion, beauty and online desks.

1) How many unpaid work placements are currently running at Vogue, and do you accept that these roles should be paid? (If you dispute the details I have listed above, please state which are incorrect).

2) Is there a cap on the travel expenses allowance?

3) How does Vogue / Conde Nast feel these placements fit with the UK National Minimum Wage law?

4) How does Vogue’s Editor Edward Enninful feel these unpaid work placements fit with his stated aim to improve diversity within the fashion world?

Despite working on the same magazine, Mr Russell and the Editorial Co-ordinator seemed to have a very different idea of what the ‘workplace shadowing’ (that word is back again) placements involved:

Thank you for your query. We offer workplace shadowing, which gives people the opportunity to learn how our workplace operates, test their interest in a possible future career, as well as providing invaluable opportunities to network and improving their skillset in relation to future employment.

Those undertaking workplace shadowing are in the office to learn, are entirely free to attend external meetings and interviews, and are not obliged to come to the office every day (although for health and safety reasons we do ask that they inform the Managing Editor if they’re not attending.) As such, there is no legal requirement regarding the National Minimum Wage in relation to workplace shadowing.

A number of our workplace shadowing placements have gone on to other roles within the organisation. CondÃ© Nast also runs a successful and competitively paid graduate scheme, has intern opportunities (maximum of six months) where the NMW is paid, and also work with colleges to place students as part of their course. Specifically on Vogue we have also started to work with the charity MyBigCareer to provide workshops and insight days to Year 11 and 12 students from disadvantaged backgrounds and whose mission is to break down barriers to social mobility.

Workplace shadowing placements with Vogue were recently changed from a three-week to a four-week time period as it became clear that often the final week of a month was difficult for the candidate to fill productively (for example with colleges), combined with feedback stating that a four-week cycle was felt by those undertaking the workplace shadowing to be a more informative and helpful duration. At any one time, there will be workplace shadowing opportunities with features, fashion, beauty and art/pictures. Travel expenses are reimbursed on receipts and are capped weekly at the level of a travelcard for zones 1-8.

Let’s get this straight. British Vogue’s work placements involve transcribing, writing and calling in samples… yet are definitely just ‘shadowing’. These unpaid placements do not involve real work… but do help improve people’s ‘skillset’. They also help those who do them to move on to other (presumably paid) roles at Conde Nast and help expand their ‘network’… yet they are definitely not a barrier to those who can’t afford to work for free.

Confused? Us too. That’s why we’ve filed a complaint with HM Revenue and Customs (who’ve said they’ll respond in 35 days, so watch this space).

“This news is gutting, infuriating and baffling, in equal measure. Everyone wants Vogue’s new Editor Edward Enninful to bring real change to British fashion, and he seems genuinely committed to improving diversity and inclusion. But he must explain why he thinks it’s okay to have unpaid interns working at his own magazine.

“Unpaid internships take advantage of those who do them, entrench privilege and exclude diverse talent. Vogue’s four-week placements may be short, but unless they pay a wage they are out of reach for most young people, who simply can’t survive in London for a month without any money. The fact that these placements can lead to paid jobs at Vogue is actually a point against them as it underlines how rotten the entry system is.

“We hope Edward takes our complaint as a helpful wake-up call. As Editor of British Vogue he is uniquely placed to lead the way on fair access and inclusion in fashion. For example, we’d love to see Vogue stop working with fashion designers, retailers and PR companies that don’t pay their interns. Britain’s young fashion talent desperately need Edward to fight their corner – but he can only do that once his own magazine sets the best possible example on how things should be done.”

One more thing: Graduate Fog actually wrote to Edward Enninful back in November 2017 to congratulate him on his new job, and to ask for his help banishing unpaid internships from fashion. We never heard back, but we live in hope… 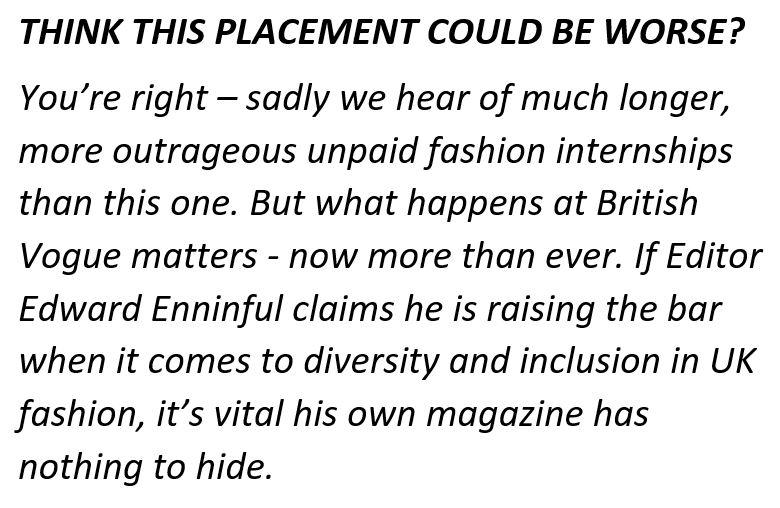 * WHY IS THE FASHION WORLD STILL HOOKED ON UNPAID INTERNSHIPS?
Other industries have accepted that the practice is rotten – so why is fashion one of the last to give it up? Is the industry so elitist that nobody even questions it? And why do fashion interns themselves often refuse to accept that they should be paid for their work, presenting as ‘Stockholm syndrome interns’ and passionately defending their right to work for free for their ‘lovely’ employer? Share your views on fashion’s twisted relationship with unpaid work below…