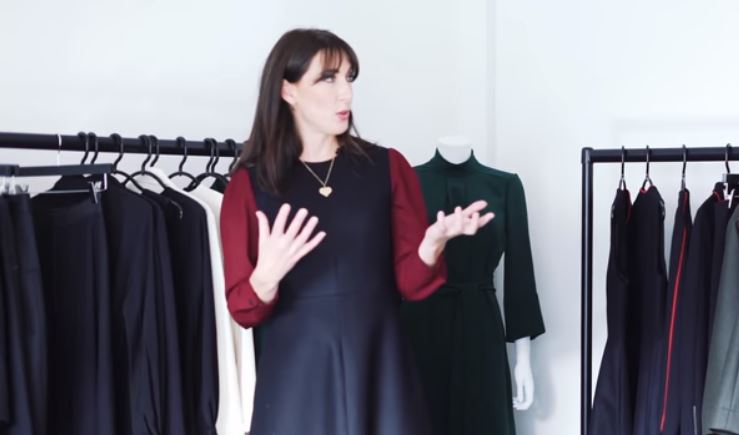 * OUR STORY PICKED UP BY THE GUARDIAN! *

UPDATE 08.11.19: Cefinn have re-worded the advert and now claim this is a ‘job shadowing program.’ It is still unpaid. Thanks to the Guardian’s Sarah Butler (@WhatButlerSaw) for the below update:

Interesting dev at SamCam’s Cefinn since our story on their ad for an unpaid internship: Ad changed to one for “job shadowing” for a limited period during higher education course.. both of which are government-approved conditions for.. Unpaid work! https://t.co/dj83MjbSBO pic.twitter.com/q0PUydfsBe

Samantha Cameron’s fashion label Cefinn has advertised an unpaid ‘PR and marketing’ internship, sparking fury among fashion graduates who point out that the position is only open to candidates lucky enough to have financial support from their family. Despite listing multiple duties which the successful applicant will perform – including market research and competitor analysis – no salary is stated, and a representative for Cefinn confirmed on Twitter that the position is unpaid. The internship is based in London, and we understand from an applicant that it lasts for three months.

Graduate Fog has contacted Cefinn multiple times since spotting the advert, but no-one from the firm has responded. However, we recently noticed that the tweet confirming that the internship was unpaid has been removed from Twitter.

As it is unclear why Mrs Cameron’s firm is not offering at least the minimum wage for what appears to be a real job, and we have not heard back from Cefinn, Graduate Fog has reported Mrs Cameron’s company to the government’s minimum wage law officials, asking them to investigate.

Don’t forget! Our campaign work is funded entirely by the generous members of the Graduate Fog Employers Club, our coalition of responsible employers of young people

We have also noted that Cefinn’s website mentions an ‘internship programme’, of which PR and marketing is only one type, raising concerns that the advertised role may be just one of many unpaid roles being run at Cefinn, and that multiple young people could currently be working at the fashion label for free. Again, we have asked minimum wage law officials to investigate.

Here is the advert: 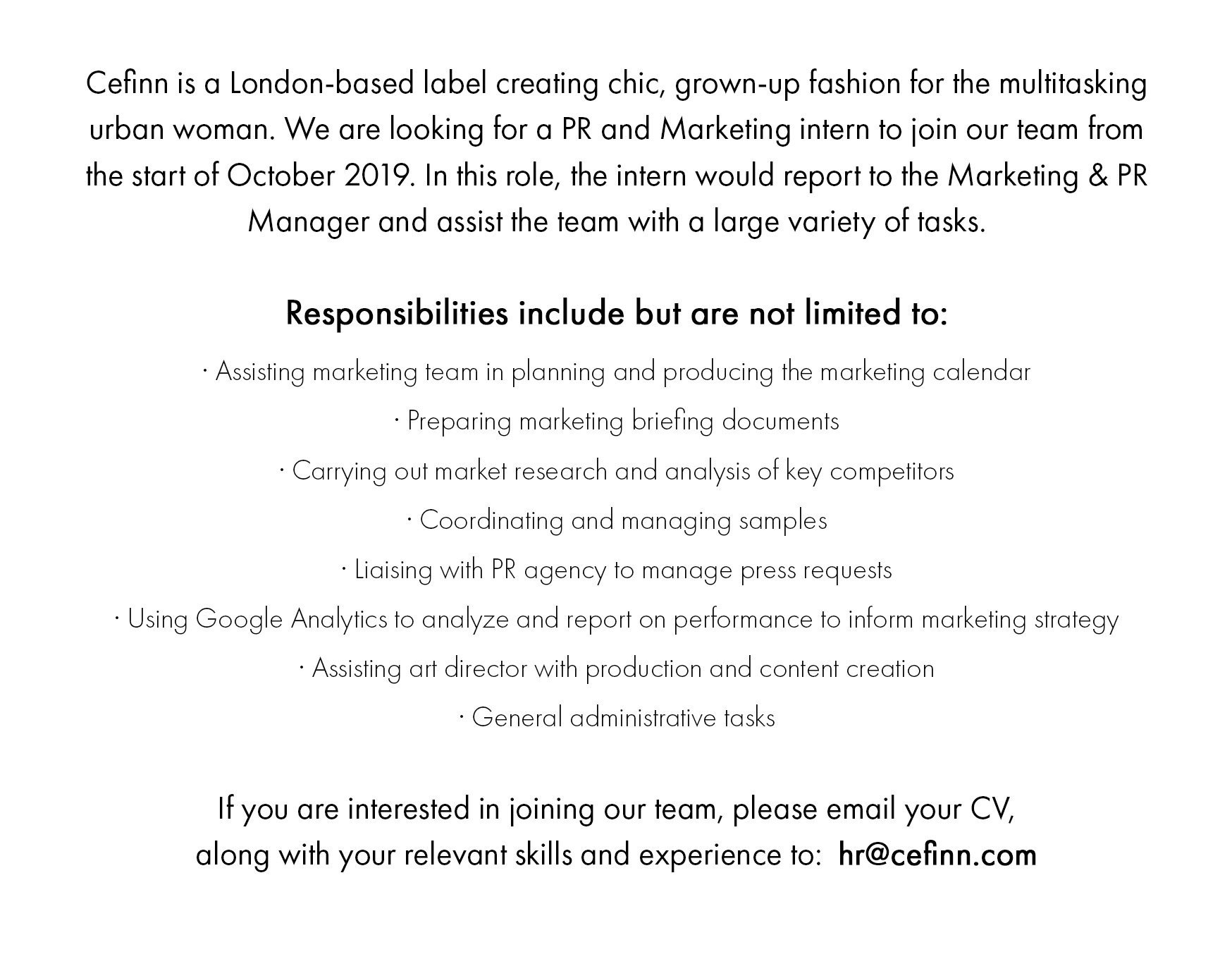 CHIC – OR CHEAP? You decide

“What is Samantha Cameron thinking? This advert clearly describes a skilled job involving real work – which means that Cefinn should offer a proper, legal wage. Without pay, this CV-boosting opportunity is only open to those who can afford to work for free – everyone else is automatically excluded. For all the claims that Mrs Cameron’s new label is ‘chic’, this behaviour is just plain cheap.”

Here is the tweet, confirming that the internship is unpaid: 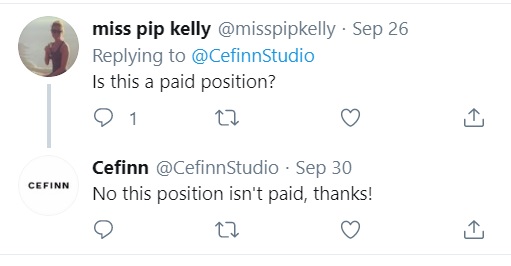 Here is our email to Cefinn, outlining our concerns about this internship:

TO: CEFINN
FROM: GRADUATE FOG
SUBJECT: YOUR CEFINN INTERNSHIP

I see you are advertising a PR and marketing internship at Cefinn, which appears to involve a great deal of skilled work, and seems to be aimed at young people keen to start a career in fashion.

Please can you clarify:
Is this is a full-time role, and what are the hours?
How long will this internship last?
Is it unpaid (as confirmed by a Cefinn representative on Twitter)?
How do you understand that internships at Cefinn fit with UK employment law?
As the advert states that this internship was set to begin at the start of October 2019, can you confirm whether someone is currently in this role?
Are there any other internships like this one, currently running at Cefinn? From your website it appears that ‘PR and marketing’ is just one type that you run.
Thanks,

After chasing Cefinn several times but receiving no reply, here is our complaint to HM Revenue and Customs, asking them to investigate Mrs Cameron’s company: 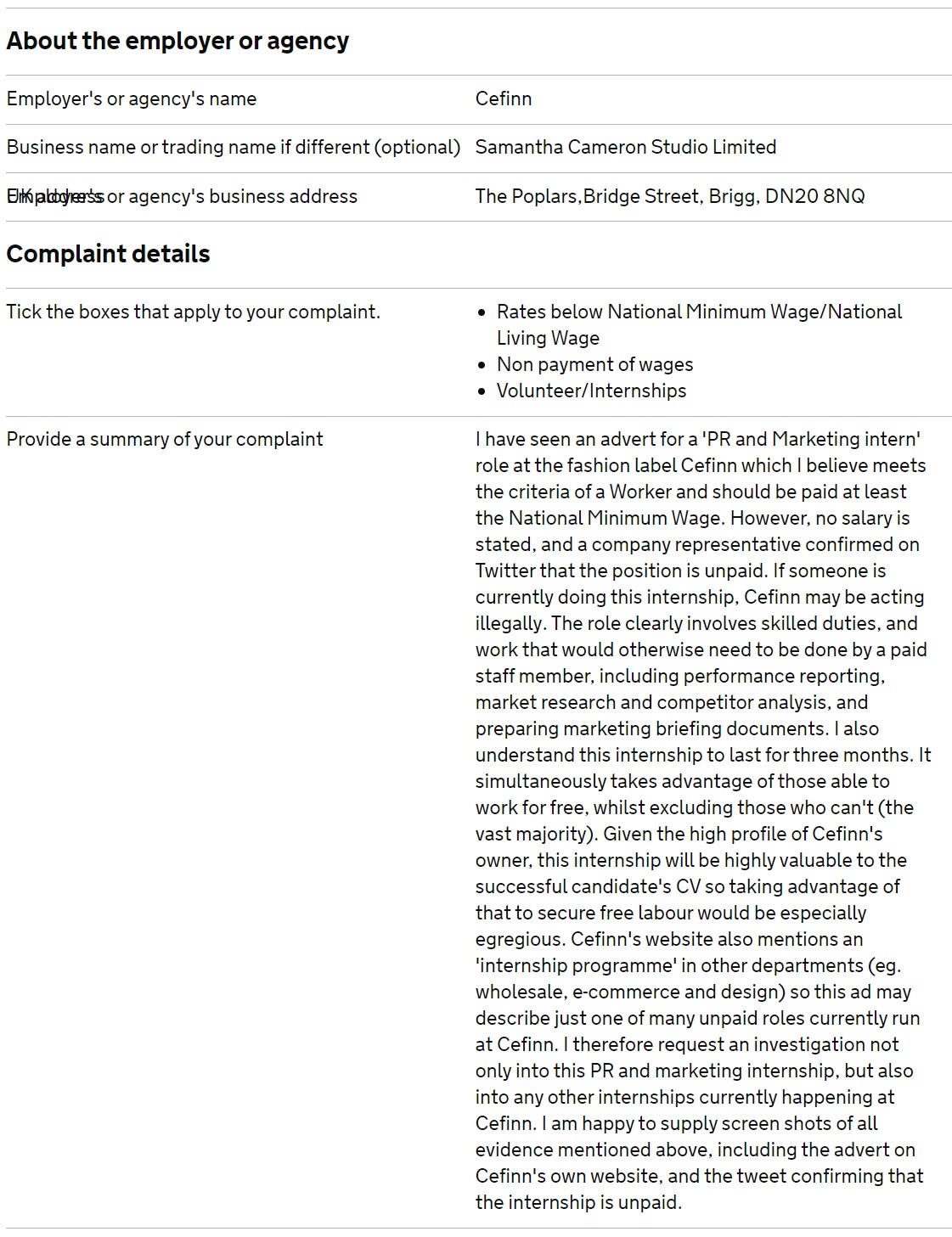 And here is the careers page on Cefinn’s own website, which raises concerns that this internship may be one of many being run at the fashion firm…

* ARE YOU CURRENTLY WORKING AT SAMANTHA CAMERON’S COMPANY, CEFINN?
If you’re an intern, are you paid for your work – and what sort of work are you doing? If you’re a paid Cefinn employee, are you uncomfortable with the presence of unpaid interns at the firm?