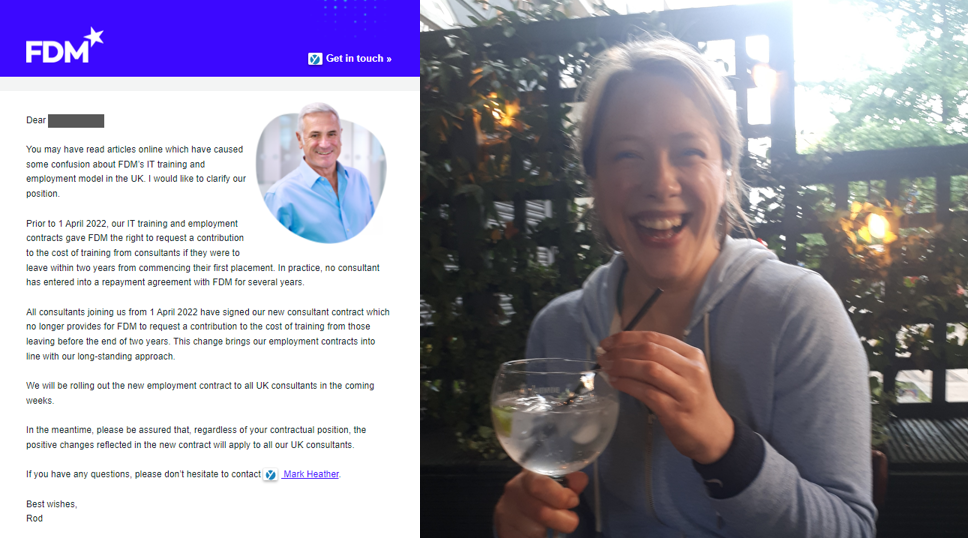 Up to 2,000 graduates have been told they are free to leave their job at FDM Group thanks to Graduate Fog’s campaign to Stop Exit Fees Now.

The company’s top boss has given a guarantee that current FDM employees will not have to pay ‘exit fees’ if they leave in less than two years. Some graduates feared they owed as much as £15,000.

FDM has always claimed the fees were to reimburse the company for the investment made in the graduates’ training, but graduates have disputed that the sums demanded match the quality of the training provided. As a result, they say they have felt ‘trapped’ in roles they were unable to escape.

Many have told Graduate Fog they suffered extreme mental and physical ill health as a result of their predicament. Particularly impacted were those stationed far from family and friends as a result of FDM’s ‘geo-flex’ policy, which requires them to work wherever they are placed in the UK, often with little notice.

Graduates from disadvantaged and ethnic minority backgrounds seemed to be particularly vulnerable to the company’s persuasion tactics, as well as being among the least likely to be able to afford to buy their way out. Despite this, FDM continued to promote itself as a champion of social mobility and diversity, shocking graduates by securing a place for themselves on the Social Mobility Foundation’s Employer Index for 2021.

What happened on Wednesday?

On Wednesday evening, all graduates received an email from FDM’s CEO, Rod Flavell, assuring them that new contracts will soon be provided for all graduates, with the controversial repayment clause removed: 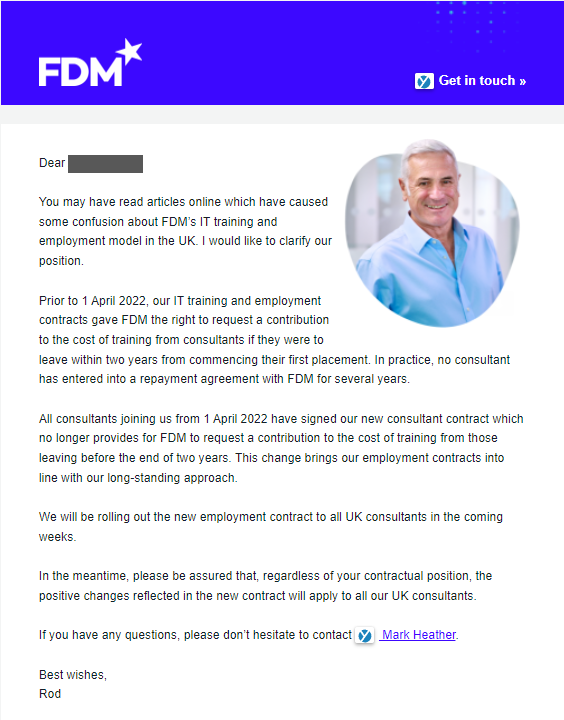 UNAPOLOGETIC: FDM boss Rod Flavell fails to use the word ‘Sorry’ (but remembers to include a photo of himself)

It is understood that the final decision to was made as a result of mounting pressure from FDM’s clients, including Sky, KPMG and Santander, who were increasingly unhappy about being dragged into a scandal created by one of their suppliers.

The final straw was a Graduate Fog story on Wednesday, in which it appeared that FDM had told Sky several weeks ago that exit fees had been scrapped – yet this message had not been communicated to graduates, making the gesture worthless. We understand that teams at Sky felt mislead by FDM’s assurances.

It is unclear whether two of FDM’s other big clients, HSBC and the Department of Work and Pensions, have done anything to help the situation. It is believed that 400 FDM graduates have been on placements at HSBC for several months and that links between the two firms go right up to the top. Graduate Fog has previously reported that HSBC has known about FDM’s use of exit fees for two and a half years, yet failed to condemn the practice, or remove FDM as a supplier. How do we know that they know? Because we told them, in December 2019.

It is also thought that a highly critical report in the Sunday Times 10 days ago was a big factor in FDM’s decision to confirm that graduates’ contracts were being changed and tell them they are free to leave if they wish. It seems that FDM had not expected Graduate Fog’s founder Tanya de Grunwald to be able to secure mainstream press coverage for the story, and they also underestimated the scale of the backlash they would receive from it from the public and clients.

What have FDM graduates said?

Since the news broke, Graduate Fog’s founder Tanya de Grunwald has received dozens of emails from elated ‘FDMers’ thanking us for our four-year campaign to raise awareness about the corrosive impact of exit fees, which have caused misery to so many young people who have felt ‘locked in’ to their jobs because they could not afford to buy their way out. One said:

‘I’m on a placement at HSBC and I’ve been thinking about leaving for a while – but I can’t afford the fees so I’ve felt stuck. I can’t explain why it’s such a horrible feeling. I haven’t felt in control of my life. Today’s news means I finally feel at peace – thank you thank you thank you! For the first time in months, I will sleep well tonight.”

‘Thank you Tanya – this is AMAZING NEWS! The general public won’t be aware, but every single FDMer knows that this is literally all down to you. You campaigned for us and supported us when nobody else bothered, because you knew it wasn’t right. You are the driving force behind all this. You have no idea how much of an impact you have had on all of us for graduates’ mental and physical wellbeing, for graduates that were so scared to leave in case they’d be chased for money they don’t have. Thank you for everything you have done to secure our release!’

And a third said:

‘Get ready for a mass exodus from FDM! Graduates stuck in placements in the middle of nowhere will be the first to quit. It’s going to be a nightmare for FDM to lose so many people in such a short space of time. Their whole model relies on us all staying put and keeping quiet. But those days are over now. We are free!’

Who else is happy?

‘This triumph is reminiscent of “David and Goliath” – I am so happy that so many graduates have been released from these horrible contracts. It speaks volumes that FDM has not offered an apology for all the damage and distress that their exit fees policy has caused over the years it has been in use. It is impossible to believe they were not aware of this, when we have been campaigning on it for so long.

‘I also note how this statement casually implies that graduates were silly to have been afraid of the fees clause in their contract. The recipients of this email know all too well that the devastating power of exit fees lies in the fear that they will be chased for the money. To pretend that was somehow their mistake is disingenuous and insulting.’ 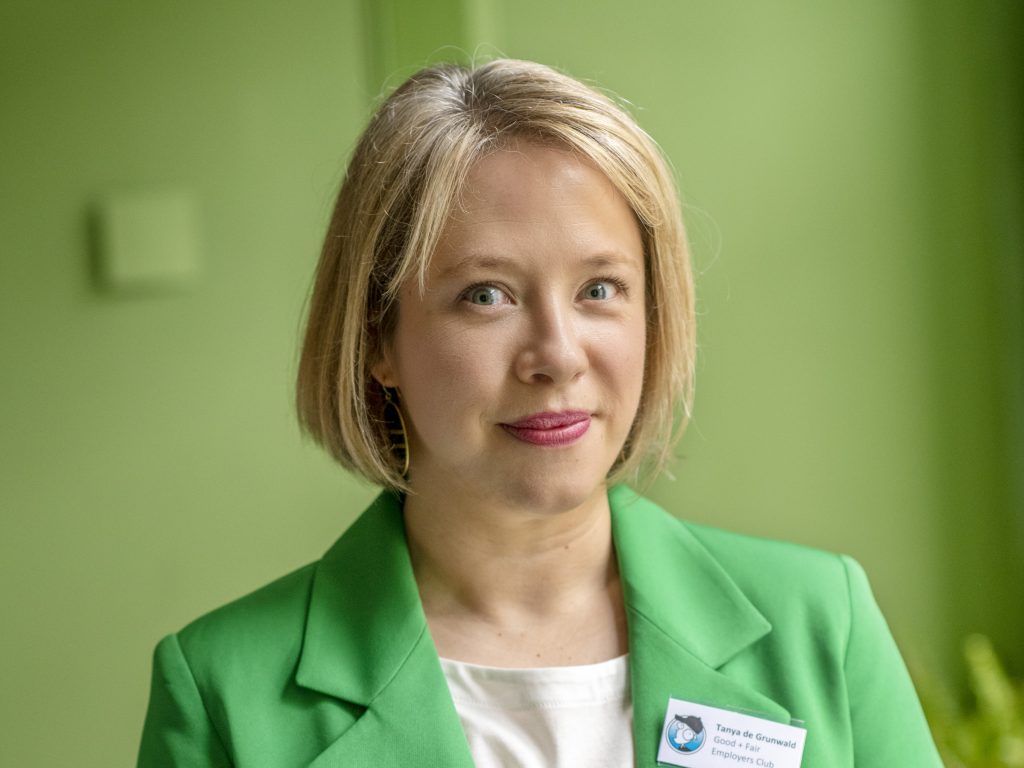 THE GRADUATE CHAMPION: Activist and journalist Tanya de Grunwald refused to give up on graduates who needed help (Photo taken at the Good + Fair Employers Club ‘Leadership Lunch’ on 4 May 2022)

Although de Grunwald expressed pride at being thanked for her work, she said the struggle to get justice for graduates reveals bigger, systemic problems with the way employment contracts are drafted and distributed to young and/or vulnerable workers:

‘It’s nice to be thanked for my campaign work – but the fact that scandal fell to me to fix shows that other systems and agencies have failed to protect these young people. We see that in the UK today, employers can put whatever they like in a contract. Once a person signs it, their only way to test the contract is to break it, and risk their employer taking them to court. That is far too heavy a burden to place on the shoulders of people who were desperate enough to sign the contract in the first place, and already blame themselves for the mess they are in.’

De Grunwald added that this story s not just about FDM and the other firms that have been charging large exit fees – their clients have questions to answer too:

‘This is a corporate scandal that has been going on within some of the UK’s biggest and best-known employers for years. That’s tens of thousands of managers who have turned a blind eye. All these firms must now reflect on how that happened.

‘Big companies need better ways to scrutinise and dump bad suppliers that don’t fit with their values. They accept responsibility for international partners – yet ignored a scandal right under their noses here in the UK.

‘They must also look at why whistleblowing failed. Several junior managers within client firms have reported being unable to escalate concerns about suppliers like FDM, because the decision to use them was made at a much higher level. When your boss’s boss plays golf with the owner of a bad company, how likely is it that they’ll be dropped as a supplier?’

Although FDM is by far the biggest employer that uses exit fees, others are still at it. It is important that we don’t forget all the graduates still trapped at the other firms that charge large exit fees – including Kubrick Group, who were still chasing graduates for their full fees of £19,800 as recently as January 2022.

Several Kubrick graduates who disputed the fees are believed to have been given non-disclosure agreements in exchange for (slightly) discounted fees. ‘It’s quite creepy – they just vanish,’ said de Grunwald. Earlier this year, we reported that 60 Kubrick graduates were working at AstraZeneca under exit fees contracts, and we have not heard that this has changed.

Other firms that graduates have been warned to steer clear of are Revolent, Ten10 and Geeks Limited. We have also been concerned to hear reports about similar contracts offered by a ‘new generation’ of exit fees employers including Grayce, Nology, Futureproof, Digital Futures and IQUAD, which we also advise graduates to avoid.

De Grunwald said Graduate Fog will continue to pressure these firms to change their policies on exit fees, warning: ‘Dragging clients into this scandal has proved to be the most effective strategy by far, so we’ll just keep doing that until all these horrible companies finally cave in.’

She also has plans to campaign for the creation of a Fair Work Ombudsman, a panel of experts who make common sense judgements about what is reasonable and right in employment law cases. She hopes that a Fair Work Ombudsman could also challenge employers over unpaid internships, and other bad practice that is more common among young employees, saying:

‘This system works well in Australia, so why not do it here? In the post-Covid jobs landscape we are likely to see all sorts of bad behaviour from unscrupulous employers. The UK’s young people need a better, fairer way to challenge their employers.’

* WHY DID FDM FINALLY SCRAP EXIT FEES?
Attack of conscience – or fears that their clients would abandon them? Have your say below…