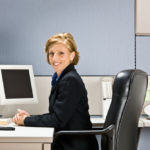 DURHAM, EXETER, ST ANDREWS, SUSSEX AND 15 OTHERS WANT YOU TO WORK FOR FREE

You’ve paid thousands of pounds in tuition fees – and now you can’t get a job anywhere.

How do you fancy going to work for your university – unpaid?

Graduate Fog has discovered that 1994 Group – an umbrella group of 19 prestigious universities including Durham, Exeter, St Andrews, Sussex and York (full list below) – is currently recruiting for two interns.

They will work at the organisation’s London head office for up to five months, being paid travel and lunch expenses only.

During this time, the interns will be working to promote the interests of the member universities.

In other words, they will be working for these universities.

Grandly calling it the ‘Volunteer Internship Programme’, 1994 Group brazenly touted these internships via Twitter. In the ad, they sell these two roles as:

Are you tripping over the irony here?!

Salary: The position is non-salaried but agreed travel and lunch expenses will be reimbursed
Contact: To apply, please e-mail your CV to Harriet Dunbar-Goddet at harriet@1994group.co.uk. You should also attach a brief covering letter, outlining why you would like to volunteer for the 1994 Group.

Details: The 1994 Group of universities is seeking to appoint two interns to assist within its central London Executive Office.

The internships are fantastic development opportunities for dynamic, talented, and questioning individuals keen to make an immediate impact on national Higher Education policy. We are seeking candidates with bags of enthusiasm who have excellent communication and analytical skills and the initiative to work independently as well as functioning as part of our small busy team. A demonstrable interest in Higher Education policy would be beneficial.

The Interns will be based in the 1994 Group’s Executive Office located in central London. These are unpaid positions but daily travel within London zones 1-6 and reasonable lunch expenses will be covered. The period of internship will be agreed between parties but we would be looking for a commitment of three to five months generally volunteering two days per week.

The 1994 Group of internationally renowned universities engaged in leading-edge research and high-quality teaching is committed to meeting the diverse needs of students, staff and policy makers. Further information on the 1994 Group and its activities can be found at www.1994group.co.uk

The main responsibilities of the role will include (but are not limited to):
# Assisting with project research and scoping
# Assisting with stakeholder and policy communications
# Providing project support
# General office duties
# Updating web site, e-bulletin and developing social media channels
# Assisting with organising events
# Dealing with enquiries from the public

The successful candidates will have an interest in the work of the organisation and be enthusiastic to increase their knowledge of Higher Education policy. The internships are suitable for candidates with an interest in developing a career in policy, communications, research or higher education.

We are looking for individuals with:
# Excellent people skills and a willingness to work as part of a team
# Good organisational and IT skills
# Ability to work under pressure with attention to detail
# Effective written and verbal communication skills
# The ability to work on your own initiative
# The desire to acquire new skills

We know that private sector companies routinely exploit their young staff by hiring them as unpaid ‘interns’.

We know that media and politics are among the worst offenders.

And we know that this trend is now spreading to the public sector, thanks to the loophole that allows non-profit organisations to label their workers as ‘voluntary workers’, despite the fact that they are rarely true volunteers.

(As we saw last month, with the internship advertised by the James Caan Foundation).

We think all of this is pretty disgusting, especially at a time of record youth unemployment.

But when your UNIVERSITIES start asking you to work for them for FREE..?

That really takes the mick, doesn’t it??

After all, these are organisations to which you have just paid THOUSANDS OF POUNDS in tuition fees, after you ENTRUSTED them to reward you with a qualification that would help you land a decent, PAID job.

I’m already sad to see that many of you feel your university education was a con.

The fact that is that this group of universities – alright, an organisation that represents them – has now effectively made it clear that they think it’s perfectly reasonable to ask you to work for them for free.

I think this will do nothing to improve the already brittle relationship between graduates and your universities.

Last night, I emailed the 1994 Group to ask them to explain their actions:

I am the founder of the graduate careers website Graduate Fog and would like to ask you about the advertisement for two unpaid interns to work at 1994 Group, posted on the recruitment site w4mp:

Unpaid internships are something my users feel very strongly about as we feel they exploit the young people who do them – and exclude those who can’t afford to do them. It has been widely publicised that this sort of practice is rife within the private sector (where it is illegal, in most cases) – and has spread to the non-profit sector (where it is legal, thanks to a loophole, which I’ll explain later).

However, I was particularly surprised to see your ad since I understand your organisation is an umbrella group for universities. Your website states:

Am I correct in thinking that a group of universities which have taken enormous fees from their students (sending them into an average of £23,000 of debt) is now looking to hire some of those students (now graduates) to work for them unpaid, to promote their interests? Do you not agree that this is rather shocking state of affairs? And do you not feel that it is a poor reflection on your member organisations (many of which are extremely high profile) that you are prepared to take advantage of young people like this?

Your ad sells these internships as ‘fantastic development opportunities’ – yet the ‘responsibilities’ laid out within the job description make clear that this role is one of a worker, rather than work shadowing or work experience.

If your organisation is a non-profit, I understand that you are legally allowed to do this thanks to a loophole in the law that claims that your interns will be ‘voluntary workers’, purely because of the status of your organisation.

It is my belief that this loophole is now being abused by many non-profit organisations, including yours. It is my understanding that this loophole was created protect genuine volunteering – say, helping out at one’s local soup kitchen. (Obviously we wouldn’t want a situation whereby the soup kitchen was legally required to pay their genuinely altruistic helpers).

It is my opinion that your interns are not true ‘voluntary workers’ at all – as they are hoping that their internship will turn into a paid, permanent job in the future. Does the 1994 group honestly believe that these two interns will be genuinely volunteering, simply out of their sheer love of supporting the work of your member universities?

I would be grateful if somebody from your organisation could clarify exactly how the 1994 group can justify this behaviour. Even if you feel you are in legally allowed to do this, do you not agree that it is ethically dubious? And do you not feel there is an issue with the fact that the work that you do is on behalf of universities, to whom your interns have already paid large sums of money, on the understanding that their qualification would give them a ‘leg up’ on the career ladder?

I will be blogging about this tomorrow so I would appreciate a swift response, via email. I’m afraid I’m not interested in discussing this over the phone. If you would prefer to wait until the post goes live (around noon tomorrow), there is a facility for you to comment directly below the article.

I will let you know as soon as I hear a response.

In the meantime, the complete list of universities which are members of the 1994 Group (and would therefore benefit from these interns’ work) are:

I assume that these universities are unaware of the 1994 Group’s plans for these unpaid internships – but that does not excuse them.

They are members of this organisation – which I strongly suspect means they pay a fee to 1994 Group to do this work for them.(Perhaps the 1994 Group can clarify this for us?)

Either way, the 1994 Group’s actions reflect (badly) on their member universities.

I sincerely hope all these universities will find this story extremely embarrassing and will be having words with the 1994 Group about its conduct.

Because – whether or not they were aware of this – colluding in the corrosive unpaid internships culture is a shameful way to treat their graduates.

*Are you shocked by a higher education organisation taking advantage of young people like this?
Do you think the interns who apply to this role will be true, altruistic volunteers? University staff – do you agree that behaviour like this undermines the trust that students and graduates place in you?

Here are screenshots of the original ad: 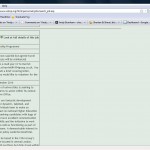 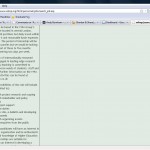 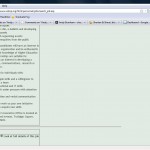