One in three call centre workers has a degree 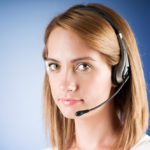 GRIM PROSPECTS FOR GRADUATES ARE “FANTASTIC NEWS” FOR EMPLOYERS

A senior jobs expert has clashed with appalled graduates by suggesting that news that a third of call centre workers in the UK now have a degree is “fantastic.”

That this figure has risen from 25% in 2009 does not surprise Graduate Fog.

I know that the number of good, graduate-level jobs available is dwarfed by demand – because you tell me every day.

For months I’ve been hearing tales of graduates who have taken jobs in pubs, supermarkets, building sites and fast-food chains. One Fogger told me he reached a new low by doing a trial day for a job at discount store Poundland – for which he wasn’t even paid.

However, what does surprise me is the unashamedly breezy response to this dire news among industry experts.

Apparently, it is good to see that young people who have spent £23k on their education (on the understanding that a degree would lead to a good job) are showing “flexibility and adaptivity” in “difficult economic times.”

Nope. In yesterday’s Guardian, Carl Gilleard, chief executive of the Association of Graduate Recruiters, was quoted as saying:

“In difficult economic times, graduates are showing flexibility and adaptivity. It is great news for call centres, who are getting added value, but the challenge for them will be holding on to those people when the job market improves.”

And it’s not just me who thinks he completely missed the point of this news. The Guardian’s piece triggered a string of angry comments from graduates who did not share Gilleard’s casual attitude towards their desperation to find work.

“Call centres are becoming more demanding of their staff so it isn’t surprising that the profession is attracting more people with degrees, particularly when we are still faced with a challenging economy and high unemployment levels.”

Are these people trying to be offensive?

This may be “fantastic news” for employers that university leavers are so desperate for work they are flooding them with applications – but surely they must realise this is somewhat less fantastic news for the thousands of graduates gutted that their education has not bought them a better job than this?

I really don’t mean to be offensive to call centre workers in general, but this needs to be said:

Graduates have not spent £23k on getting a good degree to make a career out of answering customer service queries.

If this kind of job is a likely outcome of investing in a university education, I think this should be made clear to young people before they sign up to such enormous debt.

If schools, universities and politicians are going to continue allowing – and encouraging – students to think that a degree will lead to a good job, they MUST make sure that the facts back this up.

Unless I’ve missed something, until now ‘call centre operative’ has not been a job that requires a degree. People go to university on the understanding that their investment will buy (yes buy) them a decent chance at opportunities that are a bit better than they the kind of job they would otherwise have ended up doing.

If this is NOT the case, then we must stop tricking our young people into going to university.

Do I think graduates doing these roles now are justified in feeling a little aggrieved? Absolutely. If it makes me a snob to ask why they got themselves into thousand of pounds worth of debt to make a career of answering customer queries, then okay – I’m a snob!

Whilst calling myself names, I am trying to reserve judgment on Gilleard, who is well known for being good egg and has previously been a friend to Graduate Fog (eagle-eyed Dude? readers may have spotted his kind endorsement on the book jacket).

Gilleard often comments in the press and usually gets this stuff right. Were his quotes taken out of context? Did he go on to say “Obviously, this isn’t such great news for graduates…”  – but did the Guardian’s editors simply choose not to use it? I hope so.

Because if someone with Gilleard’s experience and influence really believes that this is “fantastic news” for anybody other than the employers, I fear we’re in big trouble.

*What do you think?
Is it “fantastic news” that graduates in £23k of debt are taking permanent jobs in call centres? Am I a huge snob – or do you agree that a university education should increase your chances of landing a decent graduate role?