Cameron: Unemployed must ‘earn the dole’ 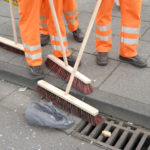 COULD JOBLESS GRADS  BE FORCED TO SWEEP THE STREETS?

David Cameron announced today that he’s getting tough on anybody who says they can’t find a job – and Graduate Fog has no reason to think he isn’t including jobless graduates in that.

In what we assume was intended as an attack on benefits scroungers, Dave insisted the Conservatives’ plans “will give unemployed people a hand up, not a handout.”

“Unemployed people must be prepared to take up job offers,” he said. “So, with the Conservatives, long-term benefit claimants who fail to find work will be required to ‘work for the dole’ on community work programmes.”

“Anyone on Jobseeker’s Allowance who refuses to join the work programme will lose the right to claim out-of-work benefits until they do.”

It’s worth pointing out that clearly it’s early days with this. I haven’t yet seen information on exactly how these changes would work, what a ‘community work programme’ might be – or whether these reforms could affect graduates struggling to find work. And the Tories aren’t even in power yet.

But I have some nagging concerns already. The biggest one is that we could see job-seeking graduates (doing their best to secure good jobs in a tough market) lumped in with the bone idle.

Having just spent more than £15k on a qualification your government encouraged you to do, it would be pretty outrageous if – on graduating into a market that appears not to value your degree – you were forced to do work along the lines of community service.

Other questions that spring to mind:

– Could job-seeking graduates be forced to take any old job you’re offered, rather than holding out for something that matches your qualifications?

– How many hours of this community work would you be asked to undertake – and would your JSA payment spread over that time be equal to the minimum wage?

– Will a graduate’s community work responsibilities interfere with the time they can spend job-hunting? As we know, applications for graduate roles can be extremely time-consuming to complete.

– Isn’t it a better idea to support graduates in their quest to get jobs, rather than threatening to penalize them if they can’t?