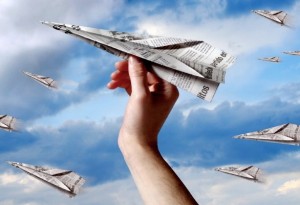 A piece I wrote for the Guardian’s ‘Comment is Free’ section has been greeted like a long-lost sibling. Not only has the article prompted 104 comments (last count as at 15.30 on Monday) – it has also been selected one of today’s ‘Editors’ Picks’.

The article, ‘Graduates – a problem in four parts,’ is my analysis of why the ‘graduate problem’ seems to have become ‘stuck’, despite acres of column inches.

I argue that, while the shortage of graduate jobs, rise in unpaid internships etc have contributed to the horrendous situation in which you lot now find yourselves, they are not the true cause of the problem. Instead, I think we should focus on seeking agreement between students, academics, employers and politicians on one fundamental question:

What is university for?

To be honest, I was anxious about the piece going live. I thought it was pretty bullet-proof – but the Guardian’s readers are notoriously vicious when it comes to tearing contributors’ arguments apart. My knees were knocking.

As you’d expect, there were the usual contributions from those all too ready to write off your entire generation as innately arrogant and entitled (as you’ll see from my comments – I wasn’t having that!). And there were long-winded attacks from miserable school-of-hard-knocks types claiming that university is now – and has always been – a self-indulgent waste of time.

But in between the Scrooges there was also some really good debate – and some interesting ideas emerged.

Some asked whether degrees could be made shorter – 1 or 2 years instead of 3 or 4? Others suggested we standardise a method for determining what any given degree is ‘worth’. (Is a philosophy degree from Oxford more or less valuable to employers than a more vocational degree from a less well-regarded university?)

It also became clear that a staggering number of people are unaware of the true reach of the unpaid internships scandal, unless they – or their children – have been directly affected by it. There is clearly more work that needs to be done in raising the profile of this issue. (Go, InternAware!)

I wish I could tell you that my article had single-handedly fixed the whole graduate problem. It hasn’t. But it has proved that when we’re all talking about the same thing, we can actually make progress.

What do you think? Had the wolves just been fed – or was my article really good? Did I represent y our views well – or could I have done better?

Click here for a link to the full article and comments.