An online ad for an unpaid (expenses-only) intern to spend 3-6 months working on Tesco magazine has been widely condemned as the latest example of big business’ disgraceful attitude towards young workers.

Yet, in an extraordinary display of so-not-getting-it, the supermarket giant’s Press Manager David Nieberg told Graduate Fog he doesn’t see what the problem is – and passed the buck to Cedar Publishing, the contract publisher which produces Tesco magazine and placed the original ad.

The advertisment states that the role involves:

“…providing administrative and organisational support for the editorial desk, along with the chance to learn and develop basic journalism skills including researching, fact checking and writing news and feature content.”

“The role is not salaried by we will pay basic expenses and provide a genuine opportunity to learn key skills.”

In an email I sent to Nieberg last night, I explained:

“While everybody knows that unpaid internships happen, they are usually something of a ‘guilty secret.’ It is highly unusual to see them advertised quite so blatantly – particularly by a large company such as Tesco.”

I then listed six questions I’d like him to answer, which were:

1) What is Tesco’s policy on using unpaid interns throughout your business?

2) What is your policy on advertising for unpaid interns? Are you aware that it is legally dubious to do this, not to mention ethically?

3) Were you aware of the ad, before I brought it to your attention?

4) If you were unaware of it, is this something you will be speaking to your contract publisher Cedar about?

5) Now that you have been made aware of it, will you be removing it?

6) What will happen to any applications you have already received for this role?

Hi Tanya, this is something you will need to discuss with Cedar Publishing.
Kind regards
David

I’m not kidding- that was it.

Despite the fact that Tesco is the ‘client’ (who calls the shots) and Cedar is their ‘supplier’ (who works for them), Nieberg made it clear he sees no reason why Tesco should comment on this matter, despite the fact that the advert carried Tesco’s name. I disagree.

I’m rather surprised by your email!

I understand that it was Cedar who posted this ad, but as the Tesco magazine carries the Tesco brand I would imagine that Tesco would want to make a comment on this – no?

Can I also ask what your job title is, within Tesco’s press office?

Can I ask what your issue is with advertising an internship on a magazine? I have seen many such adverts with national newspapers, such as The Guardian, advertising for internships.

I worked for many years as a journalist and work experience/internships are an invaluable way of gaining experience in an industry that is very difficult to get a foothold in. I personally worked on this basis for two national newspapers and was extremely grateful for the opportunity.

When I was doing my NCTJ training as a journalist, an unpaid internship on a newspaper was compulsory as part of your training.

How do you arrive at the conclusion that experience on a magazine, helping someone at the start of their career build up contacts and a portfolio, is a guilty secret?

You are clearly a very long way behind the unpaid internships debate, which has become a national scandal. Journalism is one of the most notorious industries for exploiting interns using long, unpaid placements which do not lead to permanent work. Not only does this practice exploit the interns who do these roles – it also unfairly excludes those who cannot afford to work unpaid.

Although – as you say – unpaid internships have been happening for years, the practice is spreading at an alarming rate and many employers are guilty of using unpaid interns long-term, to cut their costs.

The Tesco / Cedar ad is an extreme example of how this practice has apparently now become so ‘acceptable’ that these positions are advertised publicly.

Of course, the other reason why this ad is of particular interest is because this story involves Tesco, which usually takes the utmost care to protect its image as a family brand.

If you have no further comment to make, please just advise me of your job title.

Since then? Nothing. (I found his job title on LinkedIn).

I will give him another hour or so – and then I’ll go to Cedar to see if they want to make a comment. But really, since it’s Tesco magazine – which they pay Cedar to produce for them – I think they should accept ultimate responsibility.

If Tesco’s financial arrangement with Cedar means that Cedar does not have sufficient funds to pay for the junior staff it needs to create the magazine, then Tesco should be giving them more cash for this project. No?

On the up-side, two of the jobsites which ran the ad – Gorkana (again) and Journalism.co.uk – have now removed it.

Journalism.co.uk have also updated their policy so that unpaid internships advertised may not exceed one month.

Gorkana have not replied to my email.

Luckily, I took a couple of crafty screenshots before they took the ads down: 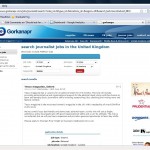 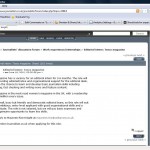 I am genuinely stunned by Tesco’s weak response to me bringing this to their attention.

There is simply no excuse for multimillon pound companies taking advantage of young people’s desperation to break into competitive industries like media by ‘hiring’ them for long stretches of unpaid work.

And I’m shocked at Tesco’s attitude that they’re not doing anything wrong. Their main defence – ‘But everyone else is doing it’ – is no defence at all.

I know everyone else is doing it.

But when Tesco – one of the UK’s biggest brands – feels it’s perfectly OK to advertise openly for a young, unpaid worker for a six-month, full-time role, this is surely a clear sign that something is very, very wrong with the world of work.

Do his emails suggest that Tesco doesn’t understand the internships debate?

Or that it simply doesn’t care?

*Should brands like Tesco be named and shamed for using unpaid interns?
If you’ve done an unpaid (or expenses-only) internship at a big brand, please email me directly here and I’ll look into it.