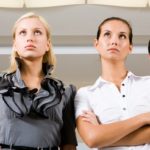 The Sunday Times has shocked Graduate Fog by publishing a feature presenting young jobseekers as hilariously entitled and lazy.

The piece includes an admission that senior editors routinely poke fun at the young (unpaid) interns they come into contact with, in a game called “Entitlement Top Trumps.” As journalist Kate Spicer explains:

It’s a very zeitgeisty sort of game. It’s all rather muttered and under the radar because, officially, the noble unpaid workie or intern is a mascot for our sad times: the ambitious, stoical “lost generation” child slave fighting for a foothold in an impoverished jobs market…

Graduate Fog wishes Style’s editors had kept their appalling game “muttered” and “under the radar” – because it is deeply offensive and unhelpful to the hundreds of thousands of young people currently trying to find work in this country. Plus, it makes their own staff look like massive bitches.

I’m also concerned that this article is continuing a growing trend – first reported on by Graduate Fog last week – for the mainstream media to turn against a generation of young people struggling to find a place for themselves in the job market. (On Friday we highlighted a piece by the London Evening Standard which implied that it was your fault that you’re jobless, because you’re lazy.)

Graduate Fog would like to remind Style’s editors of how damaging this kind of editorial is a time of high youth unemployment and when many of us are battling to get the issue of unpaid internships taken seriously by the wider public.

To devote two pages of such an influential newspaper – the Sunday Times is owned by media tycoon Rupert Murdoch – to this new ‘breed’ suggests to readers that interns like this are representative of young people as a whole. The subtext is: “See? THIS is why young people aren’t getting jobs. It’s because they’re all useless. But hey, at least it’s funny for us to watch them failing.” Nice.

Although Spicer cautions briefly that this “entitled” behaviour is exhibited by “some – not all” interns, readers will undoubtedly finish the piece with the overall impression that young people today somehow deserve to be struggling to find work.

Also, the piece is touted in the contents page as:

It is also worth pointing out that the piece concentrates on the most extreme cases of young (female) workers who come into workplaces like the Sunday Times and act as if the world owes them a job.

Graduate Fog would like to remind the Sunday Times Style that if you don’t pay your interns (which they don’t), you are more likely to find yourself lumbered with interns who behave like pampered princesses. I don’t deny that these girls do exist (in tiny numbers) – but perhaps if you paid your young staff for the work they do, you might end up with a more diverse group of ‘workies’ and find they had a better attitude – and a stronger work ethic?

Furthermore, Spicer presents no data to support her claim that “The new entitlement” is a problem that is apparently sweeping workplaces across our great nation – all her evidence is purely anecdotal.

If she doesn’t have anything useful to say, perhaps in future she should stick to doing what she does best – writing about botox.

*Are you concerned that the British media isn’t supporting jobless young people?
Do you think it’s fair for them to criticise the few interns who behave badly during their placements – or do you worry that editorial like this will make employers – and the wider public – less sympathetic to the graduate unemployment problem?