“Britain’s Got Youth Unemployment” BBC turns joblessness into a GAMESHOW 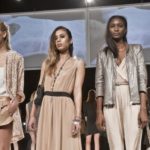 …AND ADMITS TO USING 6,000 UNPAID INTERNS IN THE PAST FOUR YEARS

The BBC is feeling the heat today after the Telegraph reported that the corporation has employed 6,000 unpaid interns in the last four years – but still insisted that these workers had “no rights” to receive a salary. A spokeperson’s statement that there was “no budget” for paying these junior members of staff is unlikely to impress interns and unions – especially given the huge salaries awarded to senior executives and the broadcaster’s biggest stars.

And now, Graduate Fog has discovered another skeleton in the BBC’s closet – the corporation seems to be planning a new TV show which effectively turns young jobseekers into gameshow contestants. Here is the blurb:

Are you a graduate, school or college leaver?

Are you struggling to start your career?

Have you been unemployed, or working in a temporary job for some time?

If the answer to these questions is yes, we can help.

Love Productions are looking for young people, aged 18-24, who are keen to find work but don’t have the experience to get on the first rung of the ladder.

We’re going to take a small group of people and put them through a series of intensive work placements, with some of the biggest companies in the country.

Successful applicants will learn from the brightest people in the business world, from office juniors to chief executives and at the end of which, employers will be able to phone in and express an interest in hiring those who have completed our work placements – live on air!

Each work experience placement will be filmed as part of a documentary series for BBC Three. If you’re interested in being considered for this unique opportunity, please fill out the application form below and return it to us with a recent photo of yourself as soon as possible.

Please return by email to: upforhire@loveproductions.co.uk
or by post to:
Love Productions
Up For Hire Team
43 Eagle Street
London
WC1R 4AT

Is it just me, or does that sound like a pretty crass and humiliating way to treat young jobseekers? This paragraph makes me feel particularly queasy:

Successful applicants will learn from the brightest people in the business world, from office juniors to chief executives and at the end of which, employers will be able to phone in and express an interest in hiring those who have completed our work placements – live on air!

Just a few months ago, I contributed to a piece in the Guardian by Lucy Tobin about the growing trend for recruiters to ask young jobseekers to jump through hoops (making videos of themselves etc) to gain their ‘prize’ – a job. (Job hunting: forget a CV, you’ll need the X Factor.)

I complained that job-seeking graduates were being made to feel like gameshow contestants, which I feel is unnecessary and humiliating for young people who are already struggling to maintain their motivation and confidence during their arduous search for paid work. I never dreamed that we were only six months from an actual gameshow where the prize was a job.

Has this become an acceptable way to treat young jobseekers?

I heard about the programme when its makers – Love Productions – asked me to help find young people to take part. But because I’m careful about what I promote to the Graduate Fog community (curse my pesky integrity), I had to check first that the young people involved would be paid for their work. Love Productions wrote back:

Apologies, we cannot actually pay anyone in documentary as it becomes a conflict of interest as to why people would want to take part, if they really feel passionately then that’s the people we are looking for not the ones after a bit of cash and exposure, this is the same on any project I work on.

When I clarified that I was saying it should be the employers who pay for the applicants labour, Love Productions said:

The series is at a very early stage, I am just saying we cannot give them money due to BBC guidelines. I do however see your point of view and think you have a great way of communicating your thoughts which Is why I contacted your website.

I do see this as a very positive experience and the aim is to create more awareness, nationally, about youth unemployment, we also aim to create an online community that will hopefully lead to many people, not just the participants in our documentary, gaining real work opportunities.

Hmm. Getting a bad vibe from the whole thing now, I declined to promote this ‘opportunity’ to you lot.

But another surprise was to come. When I took another look at the application form, written in a square at the top was: “Please attach a recent photo of yourself (head and shoulder).”

As any jobseeker will tell you, the application form that requires a photograph of yourself should be treated with caution.

If this really was about helping talented young people to find work, why would the programme-makers need to see a picture of every applicant? When I asked why this was necessary, here’s what they said:

It is simply for our purposes of knowing who has applied. As you can imagine with the many applications we receive it is easier to remember a face rather than hundreds of names.

In all honesty, I’m not entirely satisfied with this answer. Does anyone else think it’s a bit odd?

At this point I would like to be clear that there is no suggestion that Love Productions is selecting candidates for this programme based on their looks. In fact, they admit in the small print that when selecting candidates the following will be taken into account: “skill, enthusiasm, drive, lively characters whoa re comfortable being filmed.” They also say “We will be looking for a mix of people to reflect the range in age, location, gender and diversity of youth unemployment in Britain.”

However, it is an open secret that the TV industry has been known to choose case studies in this way (likewise the magazine industry – I know this only too well).

Therefore, I would like to make the point that if candidates for this sort of programme were chosen by looks – even if it was just to make sure that there was enough ‘variety’ in the line-up’s mix – then I would have cause for concern. Why? Because it would mean that some strong candidates for real jobs would be de-selected purely based on the fact that they had the wrong ‘look’.

To be honest, I’m not sure that selecting candidates according to how they come across on camera is acceptable either – if the job itself doesn’t require this quality. Hey, here’s an idea, perhaps TV shows and recruitment just shouldn’t mix?

*Is this TV programme in bad taste?
Would you apply to be a contestant on “Up for Hire”. Do you think it is tasteless to turn job-hunting into a gameshow? Or are you desperate enough to find work that you would consider applying?

Here is the Application Form:
up_for_hire_application_form

And the screen shots on the BBC’s own website: 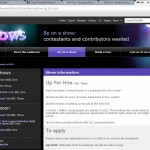 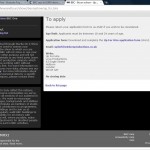