Up all night – the City interns that never sleep 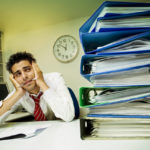 Interns working in London’s financial district have revealed that their hefty pay packet comes at a price — as they are regularly expected to ‘pull all-nighters,’ during which they get no sleep at all.

Their stories of grueling placements at some of the world’s biggest banks highlight the fact that low pay is not the only aspect of the exploitation that desperate graduates are enduring in order to gain the experience that is essential before they will be considered for permanent work. And, as City firms begin to announce redundancies, the situation looks likely to get worse before it improves.

In a feature in the London Evening Standard, five City interns — aged 20 to 24 — revealed the truth about their placements within five of the City’s biggest banks, including JP Morgan and Goldman Sachs. Although the interns all admitted they were well-paid (earning £2,500 — 4,000 a month) they said they were often expected to work until 2am, before returning again at 8am the next day.

One intern — ‘James’ — explained that the ‘magic roundabout’, “which is when you get a taxi to drive you home at 7am and then it waits for you while you shower and change and then takes you back to the office.” Working within the investment banking division at the company, he says earliest he ever left the office was 11pm. “You work whatever hours you’re asked to.” With the possibility of bagging a £40,000 job at the end of the placement, the race is on.

Another intern — ‘Tom’ — said, “I worked six and a half days a week, with Saturday mornings off. Sundays were a normal working day. You just had to finish the project you were working on.” Some of his fellow interns were so “desperate to get a job” at the end of their internship” that they were “terrified of being seen to be leaving the office. I don’t think it’s healthy in any respect.” It’s no wonder interns are regularly caught napping in the staff toilets.

The interns’ salaries will make many Graduate Foggers’ green with envy — but money isn’t always the primary motivator. Just like their peers working less well-paid industries, City interns see their punishing placement as an investment in their future. ‘Ellie’, 21, insisted: “Money isn’t as big a factor as people think in taking an internship.”

“For me, it’s the fact that once you’ve done a few years at an investment bank you can go into whatever you like at quite a high level. I don’t know exactly what I want to do when I’m older but I know this will help.” ‘Ed’, 24, agrees: “Saying on your CV that you were a summer analyst at the bank I interned at is worth a couple of years elsewhere.”

I am not surprised to hear that City interns are willing to endure this treatment from their employers. Yes, the hours are long — but these young people will be aware that their friends doing PR, advertising and journalism will be earning the National Minimum Wage (NMW, less than £1,000 a month) if they’re lucky. So to them the internship — even with the ‘all-nighters’ — will still sound like a good deal. That there is the definite possibility of a well-paid job at the end of the placement is even more enticing. Most interns in other industries have no such guarantees — they work for free in the hope that they may be offered paid work one day.

The starting salary — for the job at the end of it — is also appealing to graduates. Finance is one of the few sectors that is still paying its junior staff properly (£35-40k is typical). City interns will know that their friends trying to get into journalism, politics, advertising, fashion and PR will start on 18-20k if they’re lucky. And that’s after working for six months to a year as an unpaid intern.

What all interns have in common though — from the City and other industries — is desperation. Desperation to get a job — and desperation to gain experience. It is this desperation which distorts their view of whether the demands of their employer are fair or reasonable. The imbalance of power that City interns experience is the same as their peers interning in other industries. It’s just the currency of abuse that’s different. City interns are over-worked — where their friends are under-paid.

Yes, City interns earn a decent wage for their work — from their stories I still recognise evidence of the same ugly power imbalance between them and their employer, which I hear from all interns. The employer knows they hold all the cards — and they are setting the intern the challenge to prove themselves.

But of course, this is a game that interns can never win. When the interns rise to the challenge, work harder and harder to prove themselves more and more dedicated, what happens? The bar just gets raised even higher…

*Have you worked as a City intern?
Was it hard work – and did the money make it worthwhile? If you’re doing an unpaid internship in another industry, would you be tempted to do a City internship to earn some fast cash?