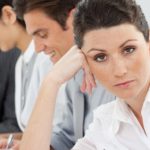 A THIRD OF EMPLOYED GRADUATES “FRUSTRATED” BY MENIAL TASKS

Concerns have been raised that firms which employ graduates are not making the most of their potential — as over a third of graduates say they were not given enough responsibility in their first job. There are now fears that many graduates in work are ‘under-employed’ — doing jobs for which they are over-qualified.

In a new survey, 36% of graduates said they weren’t given enough responsibility in their role — which had led over half of them to question whether they were in the right job. Almost half believe they could have progressed quicker in their chosen career if given the right opportunities.

The investigation quizzed graduates who left university in the last five years and are now working in hospitality, travel and tourism. But the findings are likely to chime with graduates in many other industries, where there are growing fears that your talents are being squandered in jobs you are over-qualified for.

The results also showed that graduates’ reality clashes with your previous expectations. One in five (22%) graduates said they had less responsibility than they were led to believe they would have by this stage in their life, having been to university. Lesley Potter from UKSP — the careers information website which conduted the survey — said:

“At a time of high graduate unemployment, it’s disappointing to also see that many employers are not making the most of the graduates they do take on — frustrating them by not giving them opportunity and leading them to become disillusioned with their jobs.”

Graduate Fog is concerned that these findings raise the possibility of a vast waste of the UK’s brightest young talent in the next few years, if this is happening across all industries. With an over-supply of eager, qualified young graduates, employers are able to place over-qualified candidates in jobs they could do with their eyes closed. That may seem like a ‘win’ for them, but what happens next?

*Have you been given tasks a trained chimp could do?
In the jobs you’ve had, were you challenged — or did you feel like a dogsbody? Did you feel your skills were wasted? How can graduates demonstrate their potential if your employers won’t give you the chance to show what you can do?