Shocking! UN intern living in a tent resigns – blaming HIMSELF for his predicament 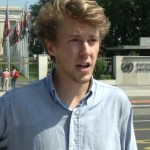 UN ‘TENT INTERN’ QUITS HAVING ASSURED BOSSES HE COULD SUPPORT HIMSELF

*LOOK! OUR STORY NOW PICKED UP BY THE GUARDIAN*

A graduate who was forced to live in a tent during his unpaid internship at the United Nations has sensationally resigned from his six-month post – blaming HIMSELF for assuring his employer he could cover his living costs without a salary when in fact he could not.

“When I applied to the UN I didn’t fully disclose my own financial situation. I said I had enough to support myself when really I didn’t and I got the job.

“The UN was clear about their internship policy from the start: no wage or stipend, no transport help, no food allowance, no health assistance. I understood this and have to accept responsibility for accepting the internship in the first place.

“Call me young and idealistic but I don’t feel this is a fair system…interns all over the world need to come together and push for the recognition of our value and our equal rights that we deserve. As the Universal Declaration of Human Rights says, everyone, without discrimination, has the right to equal pay for equal work. I hope to see the UN become a role model for all on the issue of internships in the future.”

Graduate Fog was following this story closely – and we are gobsmacked by this development. David Hyde should NOT have had to resign – none of this is his fault. Instead, the UN should be made to pay their interns a salary they can live on.

That David should have to sacrifice this opportunity because he cannot survive without a wage for six months (er, who can?) is an outrageous turn of events – and a clear admission of the UN’s failure to understand their basic responsibilities as an employer.

Swiss newspapers have reported that David has insisted that the UN had not asked him to leave or pressured him in any way – but Graduate Fog still believes they have behaved abominably.

A candidate should never have to discuss their personal finances when applying for a job. As well as being completely irrelevant and none of the employer’s business, in this case the UN is effectively using it as a screening tool, brazenly removing the opportunity from the reach of those without significant financial support. Just because the UN was ‘clear from the start’ that the internship paid no wage, that doesn’t make it okay.

* SHOULD DAVID HYDE HAVE RESIGNED – OR SHOULD THE UNITED NATIONS PAY THEIR INTERNS?
Was it right for the ‘tent intern’ to quit, for fibbing when the UN asked if he could support himself? Or do you think it’s shocking that they even ask the question?