UPDATE: THIS STORY PICKED UP BY THE BBC AND THE MAIL ONLINE!

The founder of The Big Issue has responded brilliantly to a backlash after an advert appeared online for an unpaid ‘Research Assistant’ role in his office. Tasked with helping to ‘dismantle poverty in the UK,’ applicants for the London-based internship were initially warned they would be paid only lunch and travel expenses.

However, Baron John Bird – one of the country’s most respected voices on poverty and homelessness – has reacted swiftly to the criticism, telling Graduate Fog that the role will now be paid. When we drew his attention to the bizarre disconnect between the nature of his office’s work and the fact that his assistant would be unpaid, he said:

“You’re dead right. That’s why we have turned it into a position that is paid for. That’s why we met on Friday to talk fundraising for this position. You are not the only one to object to an iniquitous system that does not even conform to the basic rights of work. Keep up the good work.” 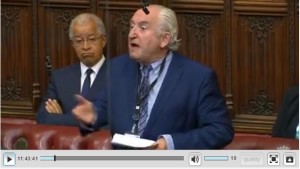 He also showed that he understood why unpaid work was such a toxic issue for young people today, saying:

“…All these freebies for the powerful exclude those who have to wait tables and labour for money. A self perpetuating oligarchy? Something like that.”

The original advert – posted on the W4MP website – alarmed several Graduate Fog readers, who asked us to investigate. Despite requiring applicants to possess “a desire to dismantle the underlying causes of poverty”, the person who posted the advert seemed to forget the importance of paying people a wage for the work they do:

Job Details
Lord Bird is recruiting a voluntary Research Assistant for the 2016-17 session to support his parliamentary work in seeking to dismantle poverty in the UK.

The successful candidate will work from Lord Bird’s parliamentary office, assisting with research tasks, preparing and summarising briefings and drafting Questions and media releases – as well as undertaking other, ad hoc administrative tasks as required.

The successful candidate will be eager to support Lord Bird’s work in dismantling poverty, possess some knowledge of the legislative process and have the ability to work both proactively and independently as part of a committed team in a fast-paced, evolving environment.

Tasks
The successful candidate will assist in:
– providing research (via readily available sources) and policy briefings
– drafting Questions for Written Answer, motions and speaking notes
– monitoring Bills, amendments and the work of HM Government, the Opposition and other groups in Parliament, and
– working on other ad hoc tasks and projects (including drafting correspondence, filing, proof-reading and attending meetings) as required.

Responsibilities
The successful candidate will, assisting Lord Bird’s staff, be tasked to:
– monitor (and maintain knowledge of) legislation, debates and motions
– prepare briefings for Bills, amendments, debates, Questions and press releases
– assist in the preparation of speaking notes and meeting agendas
– correspond with local and national bodies, charities, government agencies, social enterprises etc.
– build upon their knowledge of poverty, social enterprise and government reform, and
– work closely with, and present results to, Lord Bird and his staff.

Competencies
The successful candidate should have:
– a desire to dismantle the underlying causes of poverty in the UK
– a developing knowledge of Parliament, the legislative process and the UK political system (including parties and the media)
– experience of working confidently and cooperatively in a fast-paced environment
– high-level written and oral communication and interpersonal skills
– excellent organisation, and
– competent IT skills (including Microsoft Office and WordPress).

As a voluntary position, there will be flexible working hours. However, Lord Bird will seek to agree the equivalent of two working days per week (set across Mon-Thu, 10am-6pm) with the successful candidate.

The role being advertised is a voluntary one. As such, there are no set hours and responsibilities and you should be free to come and go as you wish. If the post demands set hours and/or has a specific job description you may be deemed to be a ‘worker’ and be covered by National Minimum Wage legislation. See http://www.w4mp.org/jobs-listings-events/jobs/
advertising-jobs-with-w4mp/volunteers/what-is-the-national-minimum-wage/ for more information about National Minimum Wage.

Lord Bird is keen to employ, and would therefore welcome applications from, groups currently underrepresented in the Houses of Parliament; such as BAME communities and people with disabilities.

So we wrote to Lord Bird, asking for an explanation:

I am the founder of the graduate careers website Graduate Fog.

One of my readers has drawn my attention to an advert you have placed on the website w4mp, seeking a “research assistant” to work for you two days per week, paid only lunch and travel expenses:
http://www.w4mpjobs.org/JobDetails.aspx?jobid=57446

Despite your claim that this is a flexible position, it is clear that once the hours are agreed, assistant will be expected to attend during those times, so will not be free to come and go as they please. In addition, it seems clear that the position involves many important responsibilities and tasks that would otherwise need to be done by a paid member of staff, if this assistant were not there.

Please can you explain:

1) How you feel this position fits with the minimum wage law, which states that anyone who is classified as a ‘worker’ must be paid at least the national minimum wage (or national living wage, if they’re 25 or over)?
2) How you feel this position is genuinely open to applicants from all backgrounds?
3) Why – given your lifetime of expertise – you appear not to have noticed the astonishing and bizarre disconnect characterised by asking someone to help you “dismantle poverty”, whilst failing to offer them a wage for their work?

Following Lord Bird’s admission of the mistake (which he confessed followed another recent error with The Big Issue’s Wales office offering a zero-hours contract, something he is against), we asked for more details about how the error had been made. This was his answer:

“When you require, demand, insist,on a revolution in consciousness around poverty, which demands new thinking, you may find people operating a bit more traditionally within your camp.

“We are a new team in the House of Lords. Going into a very traditional place where the tradition is you exploit the talents of the young so they can get their CVs fuller.  I don’t accept volunteerism in certain areas and times of people’s lives. Certainly not around careers and only the well heeled able to take plum placements in parliament for which they get jack shit. So the ad went in as a trad [traditional] ad.

“The person who sent the ad was themselves recruited that way, into parliament. Now they know it is a badge of honour that I do not follow the trad way. The money seems [to be] living wage pro rata. There won’t be any cock ups there.”

While the gaffe wasn’t a great look for Lord Bird, we are satisfied this was a genuine error and that he understands the issues here. We are also impressed with his swift response (within 15 minutes, on a Sunday morning), his willingness to admit the mistake, and his action to correct it. And with Graduate Fog now firmly on his radar, perhaps we’ve even made a new friend…