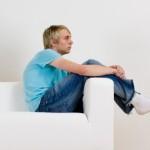 Earning crummy wages? Still living with your parents? Worried about the future? The UK’s young people are experiencing a massive confidence crisis and “suspended adulthood” according to a new report.

Significant numbers of under 30s lack self-confidence and are at risk of mental health problems, with women worst affected, researchers have said. Low pay and lack of work in today’s Britain mean many are living with their parents and putting off having children, according to the poll of thousands of 18 to 30-year-olds by the Young Women’s Trust. Large numbers of young people (of both sexes) describe themselves as worn down (42%), lacking self-confidence (47%) and feeling worried about the future (51%).

The report’s authors warned that Britain was facing a “generation of young people in crisis” as it called on the government to take steps including creating a minister with responsibility for overall youth policy.

The charity is also calling for a commitment from government to move towards extending the National Living Wage to under-25s, something Graduate Fog has campaigned on since the NLW was first announced. Age-related pay is highly controversial among young workers, with even some employers – including IKEA – questioning whether it is fair. Dr Carole Easton, the chief executive of the Young Women’s Trust, which supports and represents women aged 16 to 30 struggling to live on low or no pay in England and Wales, said it was distressing that so many young people were struggling at a time of life traditionally characterised by youthful confidence.

“Make no mistake about it, we’re talking about a generation of young people in crisis. And while life is hard for many young people, our survey shows it’s likely to be considerably tougher if you are a young woman.

“It’s not in any of our interests to write off an entire generation. Much more needs to be done to improve young people’s prospects, including through creating a minister for young people, extending the National Living Wage to under 25s, delivering on government commitments to improve housing options for young people and tackling workplace discrimination.”

Of 4,000 18 to 30 year-olds, the No Country for Young Women study found that 43% of those polled still live at home and a quarter had to move back in with their parents because they couldn’t afford to live independently.

* DO YOU AGREE THAT YOUNG PEOPLE NEED THEIR OWN ‘YOUTH MINISTER’?
Have your say below…