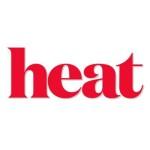 BUT THEY CLAIM IT’S A CHANCE TO ‘SHADOW AND LEARN’

* OOH! THIS STORY HAS BEEN PICKED UP BY THE BBC AND THE GUARDIAN! *

Heat magazine has angered young job seekers by advertising a “grunt work” placement in its fashion cupboard, paying just £10 per day. Although labelled as “work experience,” the position appears to be more like an internship, as applicants must be aged 18 or over, and are expected to undertake numerous essential tasks, including unpacking and returning clothing samples, and researching pricing information. Is it really “work experience” – or just work? And shouldn’t it be paid?

The advert was published on Go Think Big, the jobs website founded by mobile phone company O2, and run in partnership with Bauer, the publisher that owns Heat. Go Think Big was launched in 2012 by Heat’s then-editor Lucie Cave and O2’s CEO Ronan Dunne (who stepped down in July 2016), with a pledge that £5m would be poured into the website to help young people into work. The site’s tagline is “Helping young people achieve their career dreams,” but the media graduate who brought the advert to Graduate Fog’s attention said:

“It’s an absolute piss-take. It is blatantly just grunt work they don’t want to pay someone to do.”

“As part of your placement you will mainly be working with the fashion & beauty team assisting them in the fashion cupboard, looking after all clothing samples that come in and then need to be returned to various PR agencies. This is a big part of working on a style desk so we need someone organized and hard working — plus think of all the amazing products you’ll get to see!

“As well as that, it can also involve finding pricing and stockist information for items being featured in the magazine, organzing [sic] the beauty cupboard, research for fashion and beauty features and lots of other varied tasks to help with the busy team.”

Here’s the ad in full:

The advert has reignited the debate where the line is between true ‘work experience’ and an internship (or short term job) that should be paid. While long, unpaid internships are less common at big magazines than they once were (now they fear being named and shamed), shorter, expenses-only placements have sneakily become the norm. However, these have tended to be for younger applicants, and involve little real work. So what’s going on? Have internships been shortened, stripped of a salary, and re-branded as ‘work experience’? 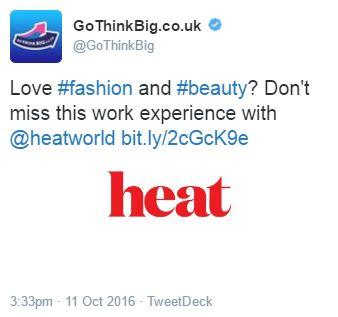 Have internships been shortened, stripped of a salary, and re-branded as ‘work experience’?

When asked to explain why the placement wasn’t paid, Go Think Big insisted it did not involve set hours or set responsibilities, and added: “This work experience is a chance to learn from and shadow the team.” Hmm. 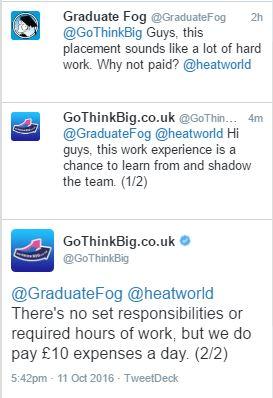 The National Minimum Wage (NMW) law states that where someone fits the description of a ‘worker’ (with set hours, set responsibilities and doing work that would otherwise need to be done by a paid member of staff) they must be paid at least the NMW (or the National Living Wage, if they’re 25 or over).

The only exceptions are if the person is doing the placement as part of their course, or the employer is a charity. The length of the placement is irrelevant.

Fashion internships are notoriously hard work, with fashion ‘workies’ often being expected to stay late to pack suitcases of clothing for colleagues’ trips to shoots in glamorous locations. At most magazines, the fashion “cupboard” is a windowless room separate from the main open plan office.

* WORK EXPERIENCE – OR JUST WORK?
Should this placement pay a proper wage – or is Heat right to only offer £10 per day? Do you believe that the person who takes this placement will feel free to come and go as they please, and pick and choose their tasks? And is it really an opportunity to ‘shadow and learn’ or ‘grunt work’, as our reader suggested?