A new low for the ‘gig’ economy? Internet slams Freesist, the website for freelancers willing to work for free 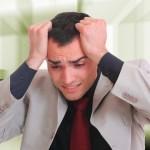 NEARLY THREE QUARTERS OF YOUNG FREELANCERS SAY THEY’VE BEEN ASKED TO WORK FOR FREE IN THE LAST 12 MONTHS, ACCORDING TO NEW STATS

The founders of a controversial new website where freelancers can offer free labour in the hope of finding paid work in future have defended the platform as “an alternative” way of doing business where the benefits on offer are “greater than just being paid.” The row erupted as it emerged that close to three quarters of young freelancers (aged 18-24) have been asked to work for free in the last 12 months, as concerns grow about the true nature of the so-called ‘gig’ or ‘flexible’ economy.

In the last 24 hours, Freesist has come under fire on Twitter, with critics accusing its founders of normalising unpaid work. 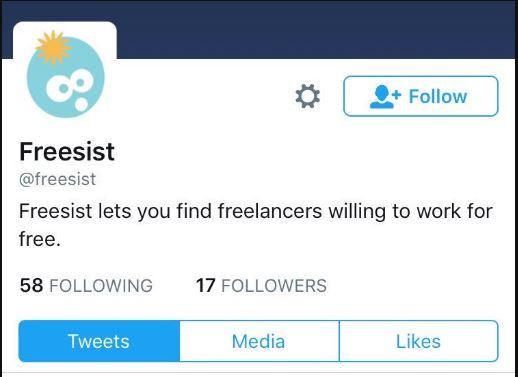 FREESIST’S ORIGINAL TWITTER BIO In the last 24 hours it has been changed to “Freesist lets you find people willing to work for a valuable exchange, rather than money.” h/t  @pixelatedboat

BAD FOR BUSINESS Freesist has not been warmly received on Twitter

“Freesist is looking to provide an alternative for today’s consumption habits. The idea emerged from the fact that most people are specialized, experienced, and skilled in different niches. Then we thought, why not exchange those skills instead of paying for them? For an example, take small businesses, who are surviving on ~zero budget. Why not letting them promote themselves by using their skills? The more you contribute to the community, the more you receive “for free”.

“The benefits for the long-term can be greater than just getting paid for your work. For instance, If you want to sharpen your skills, promote yourself, or gain work experience, Freesist is the right place for you.

“Our model is quite simple, the first gig is free! to ask for more, you will have to give something in exchange. This is how we make sure the service is decent and fair for both sides.

“We are not asking freelancers to work for free. We are here to create a community where you can give value, other than money, in order to receive one.”

The row has erupted as new figures were published showing that freelancers – particularly young freelancers – face unprecedented levels of stress caused by the harsh reality of the so-called ‘gig’ economy. Research by Approve.io found that nearly three quarters (72%) of freelancers aged 18-24 say they’ve been asked to work free in the last 12 months, with over a quarter (28%) rating these requests as their top cause of anxiety.

Much has been written about the growth of the so-called ‘gig’ economy, where workers lack a full-time, regular jobs and instead make a living from a number of casual arrangements with several employers or clients. Fans of this new style of work (many of whom have their own permanent role, thanks very much) have argued that the popularity of this new ‘flexible’ working style proves how entrepreneurial people have become.

But the latest stats suggest that the reality is less fun that it seems, and the emotional strain is taking its toll on those who find themselves doing this sort of work at the start of their career. According to new figures from Approve.io, the creators of a client-approval tool for freelance creatives:

– 73% of those aged 18-24 of those say their anxiety was caused by client conduct, with late payment, unreasonable requests and asking for free work among causes

– 4% of those aged 18-24 of freelancers have been ‘ghosted’ by a client, meaning the client cut off all communication without explanation

Professor Sir Cary Cooper, explained that the tough conditions in today’s job market made it difficult for desperate young workers to negotiate a fair deal for their labour. “Some businesses, especially those in glamorous or competitive industries, do suffer with a sense of entitlement,” he said.

* WOULD YOU OFFER YOUR SERVICES ON FREESIST?

Or does the website take advantage of desperate workers? Have your say below…