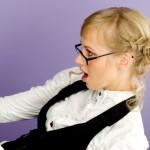 A former intern has shocked Twitter by sharing an unusual tale of a night he spent in a London youth hostel while doing unpaid journalism work experience at the Guardian. Interpretations of the story have varied, but he has told Graduate Fog he does not consider that what happened was sexual assault – and insists it was less humiliating than being asked to collect his boss’s dry cleaning the next day.

In support of Labour’s plans to ban unpaid internships, Tom Whipple – now a science correspondent at The Times – took us back to Spring 2005, when he was doing a week of unpaid work experience at the Guardian aged 23, having just graduated with a 2:1 in maths from Cambridge University: 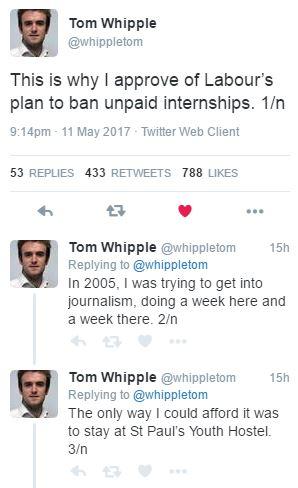 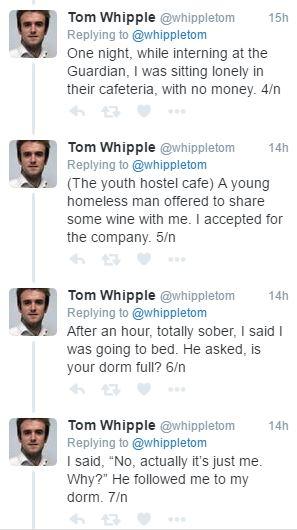 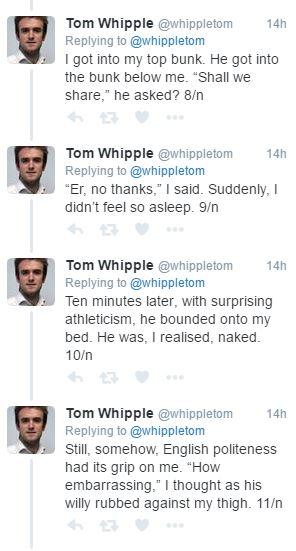 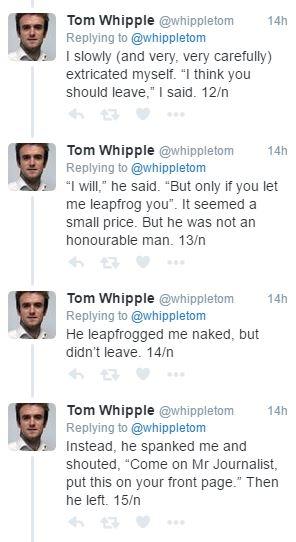 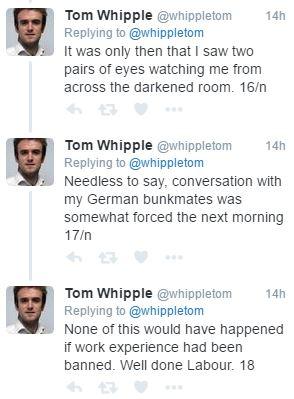 Reactions to Tom’s story were strikingly varied. While many found it hilarious, others were concerned that what he had experienced was in fact sexual assault. Others felt that although the story is told humorously, it underlines how vulnerable young workers are during periods of financial insecurity, however short  those may be. 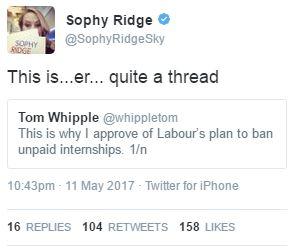 This morning, Tom told Graduate Fog he was astonished by the reaction to his tale, and gave us a bit more background about the incident:

“I had a week’s work experience on the feature’s desk of the Guardian, in Spring 2015. I think it was about the third such week I had while getting into papers (and there would be several more) and, frankly, I was getting rather depressed about it even before I got molested by a drunk naked homeless man.

“On the other hand, if I’m completely honest, this has been a go-to anecdote of mine for a decade – so that’s probably a good return on a night’s embarrassment. Even so, I was pretty surprised J K Rowling tweeted it. That kind of exposure is…odd. I’ve had people offering me counselling for sexual abuse. Without diminishing anyone else’s experiences, I don’t see it in those terms. Probably because I was quite a bit bigger than him, and it was just so absurd, I just found it funny. Also, it was nowhere near as demeaning as having to get a Guardian executive’s dry cleaning the next day.”

But Tom agreed that his story underlines a serious point about unpaid internships being a serious barrier for young people trying to start their career in competitive fields such as journalism, telling us:

“I get pretty cross about unpaid work experience. It’s one of the aspects of my business I dislike. There’s nothing intentionally malign in it, but I don’t think it’s good. If I was say, the first person from my family to go to university I think it would be very difficult to justify to my parents why I was bumming around in London working for free for a year. And that’s assuming they could afford it.

“It is a barrier to entry for people from poor families, outside of commuting distance from London. It is also a really ad hoc and crappy way to spot good people. I remember doing someone’s filing, in my second year out of university, and thinking “I have a maths degree. What the hell am I doing?” There has to be a better way.”

* HAS YOUR UNPAID INTERNSHIP EVER PUT YOU IN DANGER?
And what do you think of Tom’s story? Share your views below…