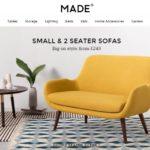 The furniture retailer MADE.COM has come under fire for posting a lengthy advert for an ‘entry level’ job requiring extensive knowledge and experience that no new entrant to the job market could possibly have.

Here is the 760 word (!) advert. The salary is not stated, but decide for yourself if you think it describes an ‘entry level’ position:

“I wanted to know how MADE.COM justify making this an ‘entry level’ role when they also require so much experience.

“I was lucky enough to get a Content Editing role basically identical to this fresh out of uni eight years ago – back when entry level actually meant entry level.

“How is it that we’re asking graduates to pay three times what I paid to study, but making it so that once they graduate they can’t even get an entry level job without them already having had a similar job before?”

Following Emily’s public challenge on Twitter, MADE.COM claimed that labelling the role as ‘entry level’ had been “genuinely a mistake”: 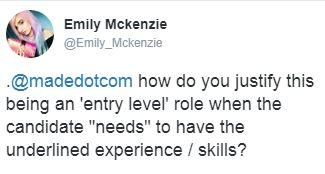 Emily told Graduate Fog she is happy that the seniority has now been changed (to ‘Mid-senior level’) – but still has her suspicions about whether it really was a mistake:

“The advert has been up for four weeks, so the sceptical side of me thinks that it only got changed because I made a fuss. But that’s still a good result.”

And Graduate Fog suspects many of our readers will share Emily’s concerns, as we are hearing numerous reports of supposedly ‘entry level’ jobs requiring more and more prior experience, leaving recent graduates baffled about how they are supposed to have gained this. Are employers simply trying to get experienced graduates on the cheap? Or do they expect you to have done unpaid internships first?

* DO TOO MANY ‘ENTRY LEVEL’ JOBS DEMAND STUPID AMOUNTS OF EXPERIENCE?
If so, what industries are worst for doing this? Why do you think they do this? And how do you think employers expect you to gain the skills, knowledge and experience they want when you’ve only just finished your degree?