Hmmm… Are too many graduates getting first-class or 2.1 degrees? 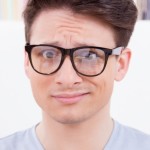 Universities have been accused of deliberately inflating graduates’ degree grades in an effort to retain their league table ranking and attract more new students, as it emerged that three quarters of graduates now obtain a first class or 2.1 degree. The allegations are so serious that the Office for Students has warned it will name and shame universities found to be engaging in the practice, as fears have been raised that making top grades too common will undermine the value of all university degrees in the long-run, if employers perceive them to be ‘dumbed-down’.

The row erupted after new data revealed that more than one in four UK students graduated from university with a first-class degree last year. The official figures from the Higher Education Statistics Agency (HESA) show that the share of graduates with the highest possible result rose 44% in five years.

That means that three-quarters now graduate with a 2.1 or above. So, what is going on? Are students working harder, are exams getting easier, or are university examiners getting softer? And what does all this mean for the graduates attaining these degrees, as they enter the job market? 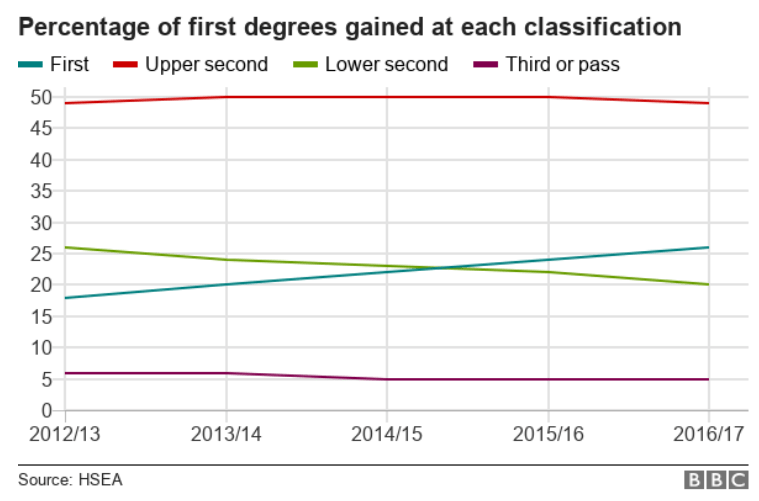 WATCH THE BLUE LINE Are students getting smarter, universities getting kinder, or exams getting easier?

The answers remain unclear – but the year-on-year rise has prompted calls for wholesale reform in the sector, amid fears that the trend is devaluing qualifications and making it harder for employers to differentiate between graduates.

Unlike national exams such as GCSEs and A-levels, universities are free to award as many first and 2:1 degrees as they like, as there is no standardised grading system. Universities are currently allowed to set their own grade boundaries and algorithms for calculating final degree classifications – a system which critics say is open to abuse.

For what motive? Financial, of course. Worryingly, concerns have been raised that some universities may be awarding a larger percentage of high grades as a ploy to tempt new students to study at their university, as opposed to rival institutions. Better degree results can be used to help an institution to retain its league table ranking, which many prospective use to help them decide which university to attend.

At Graduate Fog, we feel that is a very serious allegation, as it would mean that artificial grade inflation is effectively being used as a marketing strategy, regardless of the consequences to the students and graduates they are supposed to be educating.

Last night the new university regulator warned that universities found to be engaging in foul play would face “strong regulatory action”, as it reiterated calls for the creation of sector-wide standards for awarding degrees. Despite the Government’s repeated calls for the education sector to tackle the problem, insiders continue to warn that institutions are continuing to bump up marks in order to maintain their league table rankings.

In an effort to talk tough on a problem that Graduate Fog feels is so serious it could become the (already fragile) university market’s undoing, the Department for Education insisted that suspect institutions would be subject to monitoring and analysis and, if found to be breaching regulation, face being publicly listed.

For universities that failed to comply, the regulator would be free to pursue harsher punishments, including fines, suspension and even being stripped of their degree awarding status. A spokesperson said:

“The new Office for Students will, as a matter of routine, undertake analysis of degree classification trends and identify any cases where the pattern may suggest good or poor practice. The agreement of clear, sector-recognised standards will also be key to enabling the OfS to take strong regulatory action where grade inflation is happening.”

While universities may find this trick to be an effective marketing effective plan in the short-term, there is surely a real risk that in the long term an abundance of students with high grades will reduce the overall value of top grade degrees, as they become too commonplace.

Already we are hearing graduate employers complaining that too many applicants have a 2.1 degree. This is bad news for everyone, particularly those from less well off backgrounds. Why? Because in some cases, employers say that a difficulty distinguishing a really good degree from an okay one could make them more likely to use other additional selection criteria, like UCAS points or the prestige (‘snob factor’) of the university where the graduate studied.

HESA’s new figures included some other interesting findings. Women were more likely to graduate with a first or upper second than men (77% compared with 72%). Those who studied full time were also more likely to obtain one of these results, at 76%, compared with 54% of part-time students. There were also regional differences, with 75% of students at English universities gaining a first or 2:1, 78% in Scotland, 71% in Wales and 76% in Northern Ireland.

* SHOULD THERE BE A LIMIT ON THE NUMBER OF FIRST AND 2:1 DEGREES AWARDED?
Is it good news that more top class degrees are being given out? Or do you fear the consequences of a university system that is perceived to be dumbing down in order to keep its customers – students and graduates – happy? We’d love to know what you think, so please post your thoughts below…