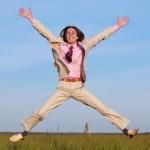 * OOH! STORY PICKED UP BY THE FINANCIAL TIMES! *

Capita have emailed their graduates announcing they have scrapped their policy of charging huge exit fees to those who quit their Novus programme in under two years, effectively granting them the freedom to quit the firm at any time, without a penalty. The astonishing U-turn is the latest twist in a sustained challenge started by Graduate Fog and supported by the Good Law Project and the Guardian, which will continue until the high court make clear that this practice is not allowed in the UK.

The email – sent to all graduates currently employed on the Capita Novus scheme, and posted in full below – was leaked to us by a graduate who previously told us he was “completely trapped” in his job there as he had been told he would owe his employer over £13,000. Sent last Thursday, the email states Capita “will no longer be seeking to enforce any existing training fee repayment clauses.”

Instead, the firm – one of the UK most controversial and unpopular outsourcing giants, responsible for London’s congestion charge and collecting the BBC licence fee – will launch “a new long-term incentive model, rewarding you for long service and high performance.”

In the email, presented as “exciting news”, graduates are told they to expect a “a new document” which will be “a replacement of your existing Training Agreement.”

While the email includes no apology, its author – who we understand to be a member of the HR team – thanks the Capita graduates for their “continued dedication” and “hard work”. The firm said the change had come about: “Following a review of our policies and procedures within the Novus programme.”

The graduate who leaked the email says he will send his new contract to us when it arrives. In the meantime, he told Graduate Fog:

“Thanks for everything you’ve done for us graduates, this should have a huge impact for those on these schemes.”

“Capita’s email is a huge climb-down by a firm that has behaved with arrogance and contempt for its graduates for several years. But where is the apology?

“This policy was always deeply unfair and highly unethical. Capita cannot be unaware of the anguish they have caused to a great number of their graduates over the years. Many have lost months – or even years – of their career because they felt chained to an employer they wanted to leave. Others, who called Capita’s bluff and left, have endured the stress of being hounded for huge sums of money they were told they owed. Others still may have paid it, or some of it – we don’t know.

“The fact is that this simply should not have happened in today’s UK job market. No reputable business should operate this sort of policy.”

For some reason, it appears Capita did not want the email to be public, as both the BBC and the Guardian were in touch with the firm after it was sent, and neither was told of its existence.

The firm told BBC Radio 4’s Money Box programme, which aired on Saturday:”The repayment clauses for training used in 2015 comply with current legislation and are common practice in the industry, however they are no longer used.” But Graduate Fog knows for a fact that the so-called ‘lock-in’ clauses were still appearing in Novus graduate contracts as late as July 2017, although the repayment appears to have been capped at £13,000:

Here is the full text of the email Capita sent to their Novus scheme graduates last Thursday:

We have some exciting news to communicate, as part of our continuing work to improve the Novus programme for our trainees, employees and customers.

As you’ll recall, when you joined the Novus training programme you signed a Training Agreement, which defined the respective roles and responsibilities of Capita and yourself in the training programme. This agreement also included a clause asking you to repay a proportion of your training costs should you leave Capita before the end of your two-year Fixed Term Contract should you be employed by us. After a review of our policies and procedures within the Novus programme, we have decided:

1) To implement a new long-term incentive model, rewarding you for long service and high performance. We will be sending you details of this exciting new initiative next week.

2) To propose the replacement of your existing Training Agreement with a new document. This document will no longer contain a repayment clause, but will instead confirm the long-term incentive model. It will be your choice whether to replace your existing agreement with the new structure, but we hope that you will do so.

3) In advance of the adoption of a new Agreement and long-term incentive, we will no longer be seeking to enforce any existing training fee repayment clauses.

I look forward to sharing details of our long-term retention incentive with you next week. In the meantime, I’d like to take this opportunity to thank you for your continued dedication to learning, and hard work on behalf of the customer organisation you work with.

This is the biggest victory so far for Graduate Fog’s sustained campaign to challenge a practice which has caused deep distress during the years that a number of employers – including Capita and FDM Group, another big outsourcing specialist – have been operating it. During our investigations, we’ve heard from 10 graduates affected by this policy (some of which were sent to us by Sarah Butler at the Guardian, another champion of this story – thanks Sarah!). 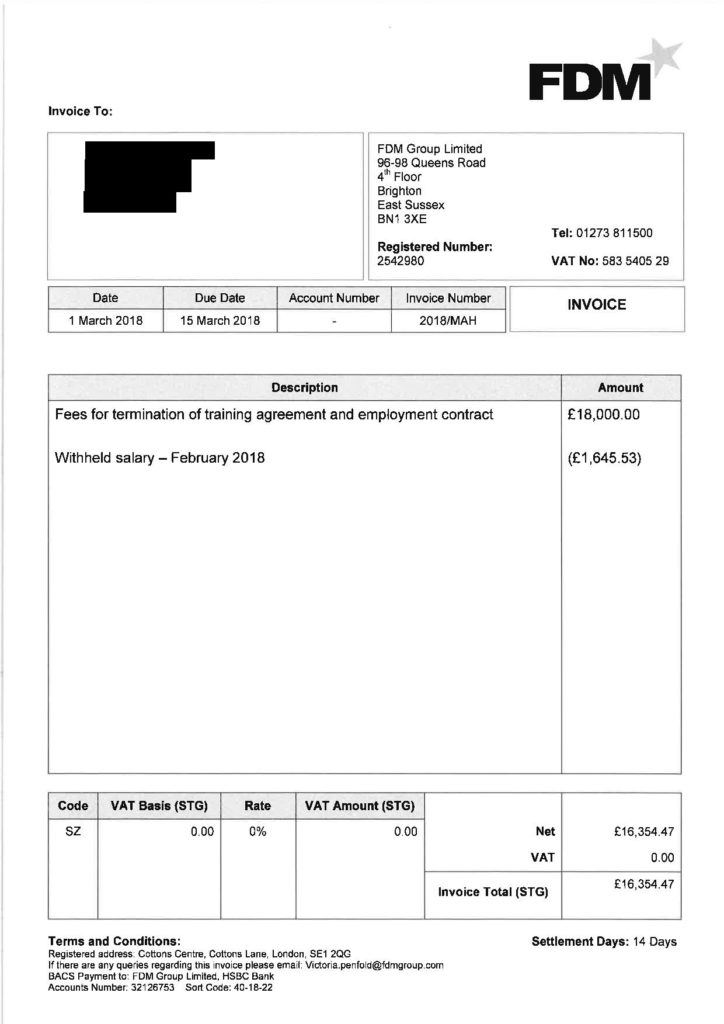 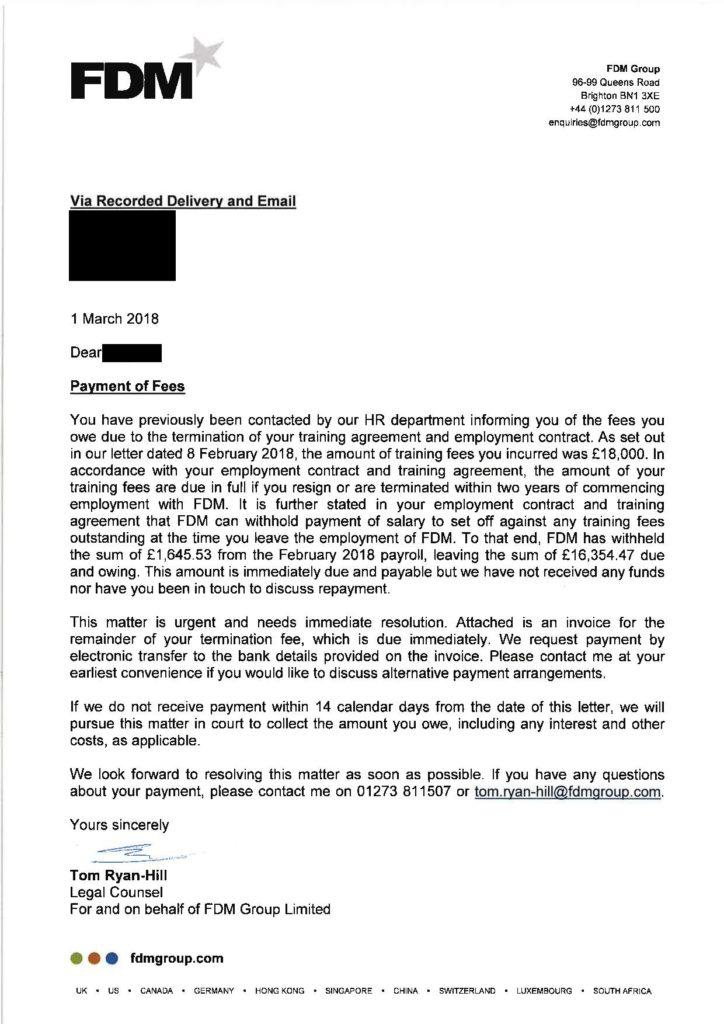 CHILLING: An example letter and invoice sent to one graduate who quit FDM Group’s graduate programme, demanding payment of over £16,000 within 14 days

We heard that those graduates who stayed felt they had been locked in to a job they hated. And those who had left said they had been terrorised by letters and invoices from Capita and FDM Group warning that they owed up to £21,000, fees the firms claimed was to cover the cost the firm had invested in their training.

Horrified, we took these stories Jolyon Maugham, founder of The Good Law Project, who offered to bring a collection of our complainants’ cases to the high court. Jolyon – a well-known and outspoken QC – told the Guardian that his opinion was that these contracts represent a sort of ‘tied servitude’ and was cause for serious concern.

Capita’s climb-down is a significant development, but this is not the end of the battle. Graduate Fog understands that the high court case will continue, as FDM Group has not yet changed its policy, and fears remain that other firms could start operating similar policies unless a court confirms that the practice should be banned. Crowdfunding for this case continues, with the campaign already having reached £15,000 of its £50,000 target at last count. 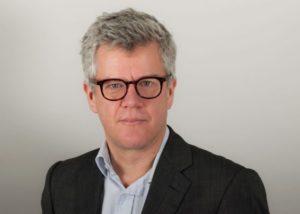 “All of these graduates are operating in a kind of tied servitude. Tied for years to a faceless behemoth, working off an inflated debt on unfair terms, on something that looks less like a legitimate training scheme, and more like a clever way of hooking in the desperate or naive.” Jolyon Maugham QC, the Good Law Project

At the weekend it also emerged that Frank Field, the Labour MP and chair of the parliamentary work and pensions committee, has written to the business secretary, Greg Clark, asking if he would “consider a public inquiry into the extent and consequences” of the practice and if further protection for workers was required. The letter added there were “significant doubts” about whether the training fees reflected their true costs. Field said:

“My main concern here is around how the practice is, in effect, trapping vulnerable workers in a particular arrangement over an extended period of time regardless of whether they need to leave the scheme for family, health or professional reasons.”

Graduate Fog can also reveal that we have asked the Social Mobility Foundation (SMF) to remove FDM from its (otherwise excellent) Social Mobility Index of fair and responsible employers. We have requested that universities and job boards currently advertising graduate schemes that operate an exit fees policy should re-think their actions.

We understand that the SMF is considering its decision, and thanked us for highlighting flaws in its selection process, as employers nominate themselves and choose which evidence to submit.

The SMF appeared to be highly concerned by reports of FDM Group’s use of exit fees, and did not need us to explain why no firm that claims to be committed to social mobility should be involved in such a practice.

* HAVE GRADUATES SEEN THE LAST OF EXIT FEES?
What do you make of Capita’s U-turn? Do you think it’s important that the court case continues, to show once and for all that ‘lock-in’ clauses – which effectively trap graduates in jobs they want to leave – should be formally banned? Or is it fair that graduates pay back training costs if they quit their job before an agreed date?