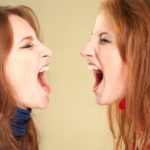 * UPDATE (7.30PM, 9 OCTOBER 2018): BEN BRADLEY APPEARS TO HAVE DELETED HIS TWITTER ACCOUNT SOME TIME ON MONDAY AFTERNOON – ALTHOUGH IT IS UNCLEAR WHY. DID YOU SEE WHAT HAPPENED? CONTACT US HERE *

A Conservative MP has sparked outrage for trying to recruit a “talented video editor” to create a “slick and engaging” promotional film for him, for no fee at all. In a Facebook post, he claimed the role would be “the ideal project for a film/media student looking for something to build their CV.” A bad-tempered online exchange followed, in which Bradley accused his critics of “moaning” and said the “faux outrage” was “bollocks”.

How did it start? Around 3pm on Friday, Ben Bradley MP – who is the MP for Mansfield and, ironically, sits on the All Party Parliamentary Group for Skills and Employment – posted this on Facebook:

One critic – Ewan Michael Riley – even made his own ‘promotional’ video for Ben Bradley, although it probably isn’t quite what the MP had in mind…

Remarkably, rather than apologising, around a hour later Bradley appeared to double-down, adding a defiant ‘update’ below his original post in which he blasted his critics for questioning his actions: 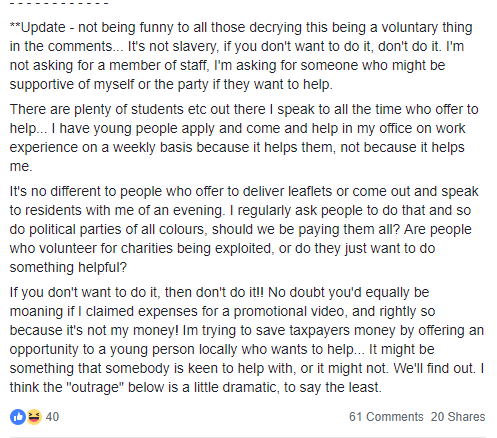 On Twitter, he also accused them of displaying “faux outrage”, claimed the criticism was “bollocks” and ignored a request to pay the minimum wage: 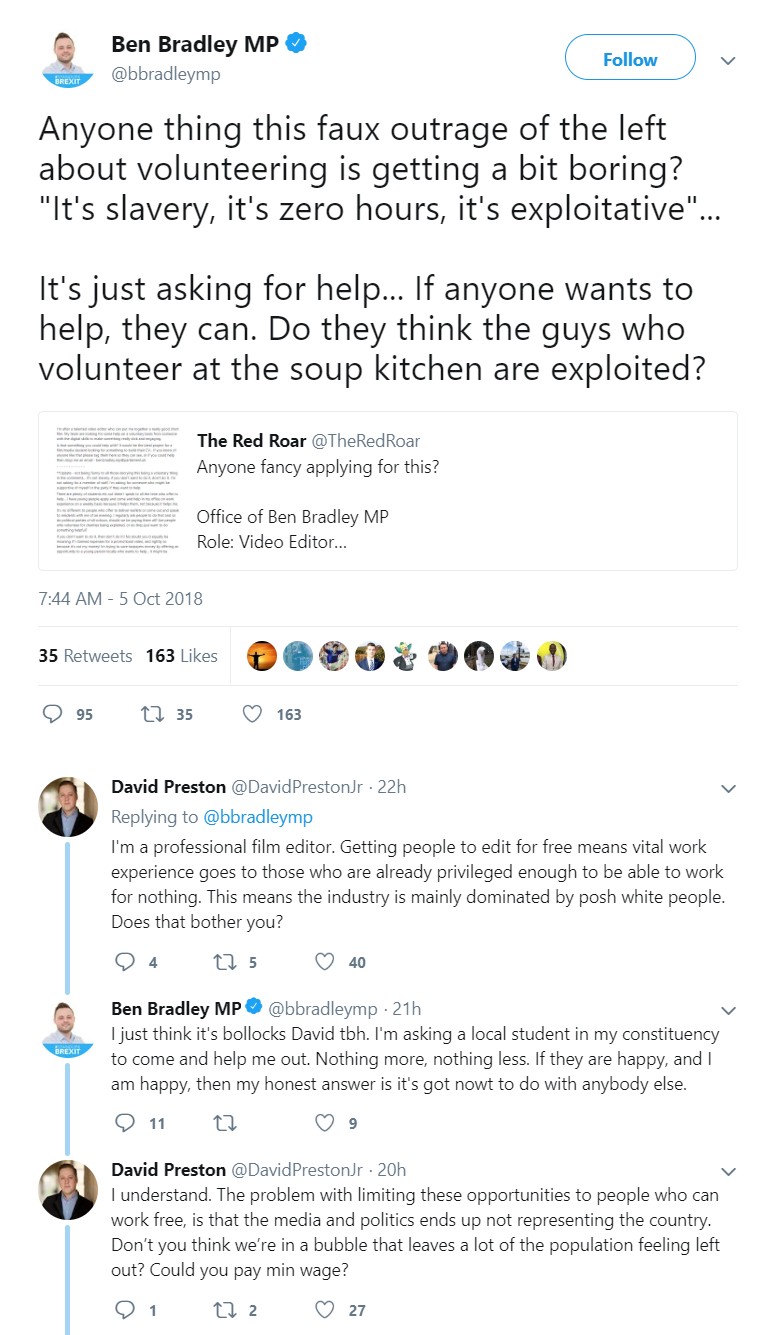 Tanya de Grunwald, founder of Graduate Fog, who has campaigned for fair internships since 2010, said:

“Ben Bradley deserved to be slammed for posting this advert, as it’s clear that he needs a skilled video editor, who should be paid for their work.

“I agree there is a conversation to be had about the line between political volunteering and exploitative unpaid work – in fact, we’ve been trying to have it for years. However, the job Mr Bradley describes is way past being a reasonable request, given the skill demanded and the size of the project. It is no accident he has pitched is squarely at students – he knows no-one else would even consider doing it for free.

“How Mr Bradley funds his video is his problem – it is not acceptable to ask someone to work for free, or to pitch it as great experience for a young person. Given his position on the All Party Parliamentary Group for Skills and Employment, it is shocking that he seems unaware of the level of frustration felt by young people – particularly those trying to enter the creative industries, and politics – who are sick of being asked to work for nothing. It is demoralising, unethical and insulting.

“But what’s even more astonishing is that Mr Bradley appears not to accept he’s done anything wrong. Rather than listening and apologising when he was challenged, he came out in a Brett Kavanaugh-style rage, railing at the fact that he was questioned. This is not the way an MP should behave, and if this is the new normal then it is deeply troubling.”

The Facebook post has since been removed, but it is unclear whether the video project has been scrapped, put on hold or whether Bradley has found the money and decided to use a paid video professional for this project. Graduate Fog has asked Ben Bradley for comment, but we have not yet received a response. Until July 2018, Bradley was also the Vice Chairman for the Conservative Party for Youth. Aged 28, he is one of the UK’s youngest MPs.

Dear Ben Bradley MP, we’re not impressed about the unpaid video editor job you advertised last week. But we’re even more concerned about your aggressive response to those who questioned it. Do you have a comment to make? https://t.co/0xrjvYGquY @bbradleymp