OUCH! Graduate loses his job with the AA after breaking his leg 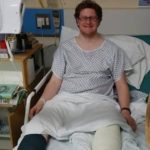 Funds are being raised to help a graduate who lost his job with the AA after he fell and broke his leg on his way to work.

As an agency worker, Alex Wright was shocked to find he had no legal protection and could be dismissed immediately, despite having worked for the breakdown cover provider full-time since February, as an administrator in their garage auto payments department.

Having sustained his injury on 19 October, Alex’s agency told him on 25 October that the AA had terminated his assignment – effectively leaving him jobless. His request to work from home – something he says many other AA employees in his department do – had been rejected.

In an astonishing series of emails with Graduate Fog (below), the AA’s main press office refused to comment on the matter, insisting: “This issue is being dealt with by the agency”.

The author did not identify themselves, and no sign-off or email signature was used. Yes, this is the AA’s main press office.

Alex now faces the prospect of signing on for Universal Credit – and his story highlights the ruthlessness of today’s gig economy, and the chilling vulnerability of agency temps, zero-hours workers and freelancers. Explaining Alex’s position, his friend Sophie Merrick, who set up the Go Fund Me page, wrote:

“My friend Alex had a fall last week and broke his leg. Because he was an agency worker, he was fired from his job, even though he could have worked from home while he recovered. This is completely legal in the UK.

“He’s now got to sign up for Universal Credit and faces at least a one-month wait for help from the government. In the meantime he still has to pay living expenses, bills, buy groceries (and likely have them delivered), and so forth.  He’s then, upon his recovery, got to seek a new job, with whatever waiting time that will take.

“Alex is highly qualified with a degree in Politics and International Relations. He’s also an active member of CAMRA and a keen environmental & social activist.

“I suffered a similar injury a couple of years ago and I know the financial hardship Alex will be facing. Even simple things like transport to medical appointments will be more as public transport doesn’t go door-to-door and ambulating on crutches is incredibly draining. So I’d like to provide Alex some form of safety net while he gets (literally) back on his feet.

“The financial stress of a setback like this is as debilitating as the injury and can really hinder recovery. I’d appreciate any help in alleviating this burden for a really nice chap.” 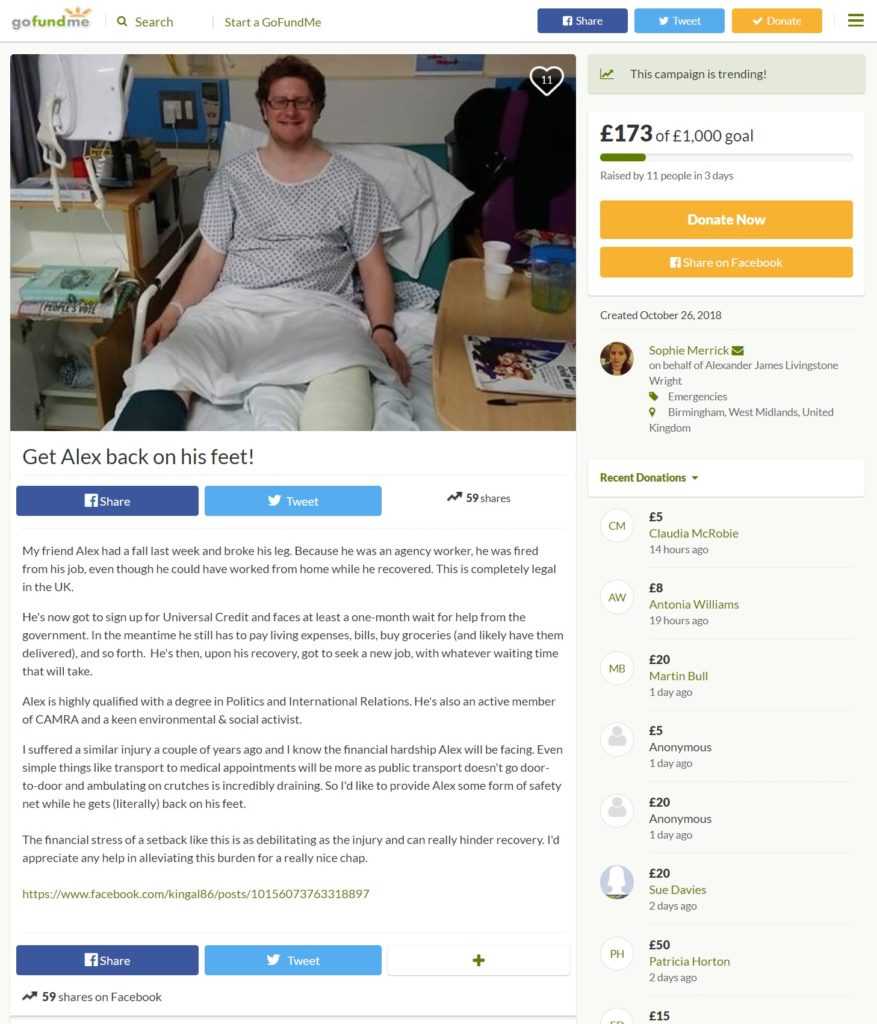 A MUCH-NEEDED LEG-UP: A Go Fund Me page set up by Alex’s friend Sophie has so far raised £173 to help with the cost of his convalescence

Tanya de Grunwald, founder of Graduate Fog and a campaigner for fair and stable jobs for young people, said:

“Alex’s case highlights the ruthlessness of the so-called gig economy, and how vulnerable today’s precarious workers really are, when something unexpected happens. The truth is that temps, freelancers and agency staff are only ever one slip – quite literally – away from having no income at all. As we head into winter, it’s shocking that the best advice we can give to the thousands of workers in Alex’s position is to be extra careful not to get ill, or fall in snow. Is this really the new normal?

“Our correspondence with the AA’s press office also raises questions about whether big employers are outsourcing moral responsibility to the agencies they use, as well as the work itself. Alex has worked at the AA’s offices full-time for eight months this year. It is shocking that they feel no duty to respond to questions about whether it was fair that his assignment was ended when he broke his leg. They made that decision, not the agency.”

Alex, 31, who has struggled to find secure and stable employment since he graduated from Aston University in 2011, told Graduate Fog:

“I emailed the AA when I was was sat on the pavement waiting for the ambulance. At that point I thought it would just be a sick day or two.

“When I realised I had broken the bone and I’d be off my feet for a few weeks, I suggested – via my agency – that I could work remotely, as many AA staff do. But then I heard back that the AA didn’t want me to do that, and had terminated my assignment.

“Lots of people at the hospital have expressed shock at losing my job for a broken leg, even though hospitals themselves have some agency staff so it seems clear awareness of the precarious situation of agency workers and many other workers needs to be increased. It’s only when something goes wrong that you realise you have no protection whatsoever – and that’s a horrible feeling.

“It’s lucky relatives own my flat or I’d be facing homelessness now.”

If you’re a temp you’re only a fall away from the dole. That’s the reality of the “flexible” labour market, as I learned today from my hospital bed when @TheAA_UK ended my job after 8 mths cos I fell over on the way to work on Fri & broke my tibia. So walk carefully everyone.

I am the founder of the UK careers blog Graduate Fog.

One of our readers – Alex Wright – was until recently employed by the AA as an administrator in your garage auto payments department, via the agency Guidant. However, after he fell and broke his leg on 19th October, his assignment was terminated, when it became clear he could not come in to work with his injury. I understand that his request to work from home was dismissed.

While I understand that the AA is legally allowed to end assignments with agency workers like Alex, do you not agree that this judgement seems quite harsh? He now has no income during his convalescence, and will be applying for Universal Credit.

We will publish a blog post about this tomorrow morning, so I look forward to hearing from you soon.

After we chased them this morning, the AA replied:

Thank you. This issue is being dealt with by the agency.

To: The AA Press Office
From: Graduate Fog

Hi
Thanks for this response – although to be frank I am rather surprised by the dismissive tone. Does the AA not feel it has any responsibility (moral or otherwise) towards this person, who worked within your offices for eight months this year?
Tanya

To: Graduate Fog
From: The AA Press Office

Yes of course we do and hence we are ensuring the issue is being dealt with by the agency.

To: The AA Press Office
From: Graduate Fog

You are taking it seriously – but the AA doesn’t want to make a statement yourselves? I’m afraid I am struggling to make sense of your response. I also suspect that our readers will be rather unimpressed. From their / my perspective it looks like the AA is passing the buck on to the agency, and trying to imply that what happened to Alex isn’t anything to do with the AA.

I’m also rather shocked that you have not identified yourself in either of your emails, so I have no idea who I am corresponding with. Is this standard of etiquette typical of the AA’s main press office?

PS. Also, the agency were presumably carrying out the AA’s instructions – to terminate Alex’s assignment. Therefore, any statement should surely come from you, and not them.

That last one was sent at 12.46pm. We have received no further emails from the AA’s press office since then. So we’ve just tweeted the AA’s President, Edmund King OBE. Perhaps he’ll have something to say about this mess?

@AAPresident Hi Edmund, the internet isn't very impressed with the AA's response to the story of a young agency worker whose job at the AA ended after he broke his leg on his way to work. Do you have better reply than your PR dept was able to provide? https://t.co/eykbLHU5or