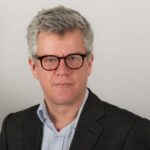 On Monday, Graduate Fog expressed alarm at an advert that appears to be a two-week runner role at Wimbledon this summer but which is labelled “volunteering” and “work experience” with a salary stated as “£1-£1.” Duties include “running errands; assisting film crews/radio reporters; collecting and distributing press releases/orders of play/running orders etc; meeting programme guests and escorting around grounds; general office duties; prop sourcing; assisting commentators including delivering refreshments.”

It is made clear that successful candidates will need to be available for the entire duration of the tournament, plus ‘set up’ and ‘clear up’ days either side.

Concerns were also raised that a line insisting “Physical fitness is essential” could be interpreted as an instruction that those with disabilities should not apply. This would not fit with the BBC’s stated claim to be committed to equality, diversity and inclusion. You can see the advert here.

We contacted the BBC on Monday morning, but are yet to hear anything back. The advert is still live and being promoted on Twitter.

Jolyon Maugham QC (pictured above) – who runs the Good Law Project and is also on the advisory board for the Graduate Fog Employers Club – told Graduate Fog today:

“It’s all well and good for BBC management publicly to bemoan the over-representation of the over-privileged at the BBC. What they need to do is put a stop to policies that entrench it.

“Although styled as ‘work experience’ this is a two week placement with successful applicants ‘required’ to perform various ‘duties’ — and to attend on the middle Sunday should play overrun. This bears the hallmarks of worker status — and the BBC may well be breaking the law by failing to pay minimum wage.”

Part of Maugham’s comment refers to a previous challenge over unpaid work experience at the BBC last year, of which we were previously unaware. It has emerged that MP Stewart McDonald wrote to the corporation’s director-general Tony Hall expressing concern that the BBC’s two-week work experience placements are looking too much like jobs which should be paid. In October 2018, Hall replied with a two-page letter assuring McDonald that the matter would be looked into. Yesterday, McDonald expressed disappointment that this had clearly not happened…

I’ve taken the BBC on before about offering unpaid work trials to people and the Director General assured me that they would stop using unpaid work. Seems I’ve got more work to do… @BBCNewsPR https://t.co/rD4ECt4JDT

…sharing his letter from Hall in full: 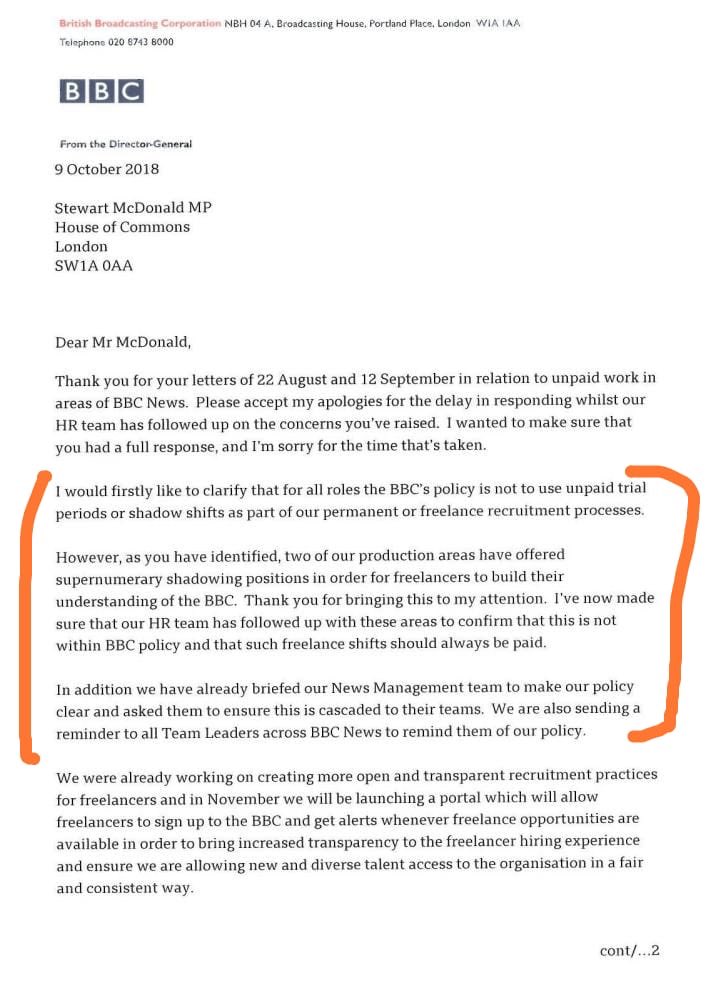 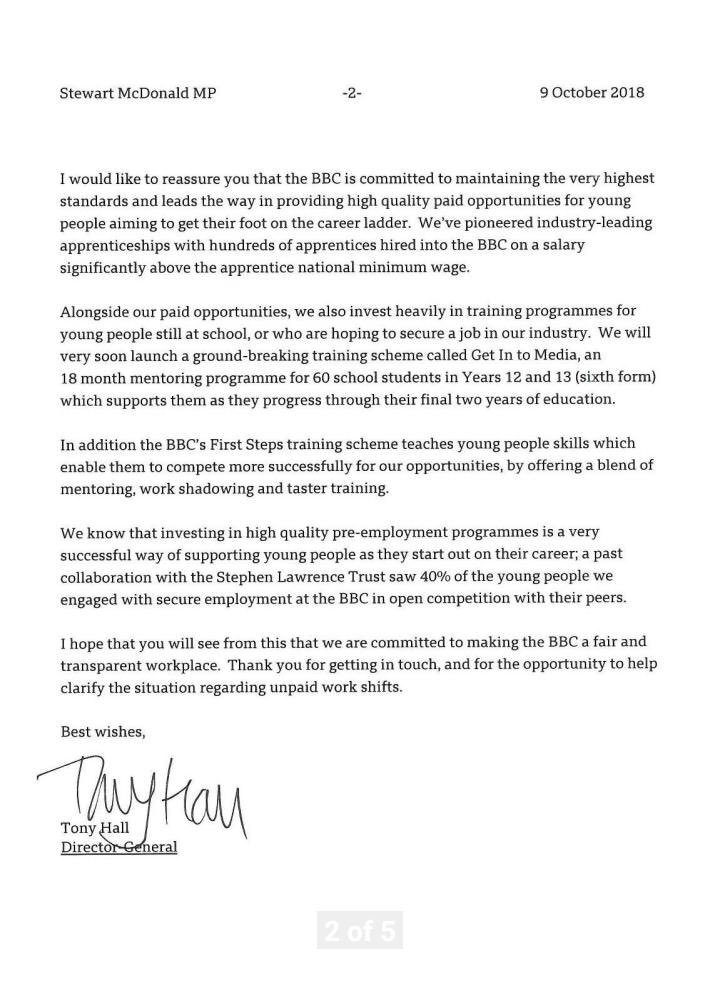 Meanwhile, our friends at Organise – the digital campaign platform which recently squared up to Ted Baker and Waterstones over working conditions and pay – has started a petition asking the BBC to change this to a paid placement which is clearly open to everyone. So far, nearly 2,000 people have signed it. If you agree that these runner roles should be paid and open to everyone, please add your name now – thank you!