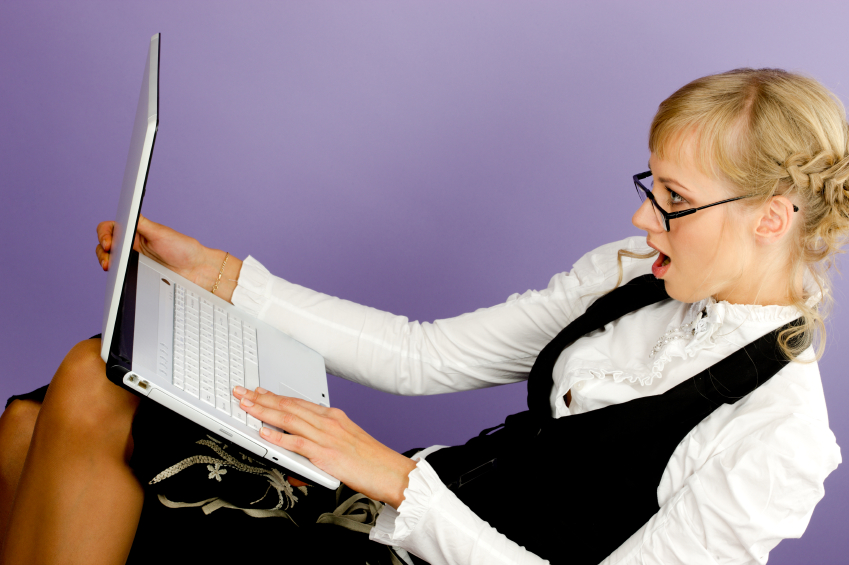 WANT TO TIDY A STRANGER’S HOME OFFICE FOR FREE? NOPE, NEITHER DO WE

A BBC Radio 5 Live journalist and broadcaster has shocked graduates by posting an advert for a ‘volunteer’ ‘assistant journalist’ on LinkedIn. The lengthy job description makes clear that the successful candidate will be expected to perform a long list of tasks including research, diary management and even organising her home office. This person must also have ‘a strong background in any form of journalism (preferably broadcast)’ and have a ‘proactive intellect’.

Rani Singh – whose LinkedIn profile states she is a Producer / Broadcaster at BBC Radio 5 Live – posted the advert at the weekend. It was brought to our attention by a Graduate Fog reader who was alarmed and angered by its length and specificity – and the fact that the role was stated as being a ‘volunteer’ position. Here it is: 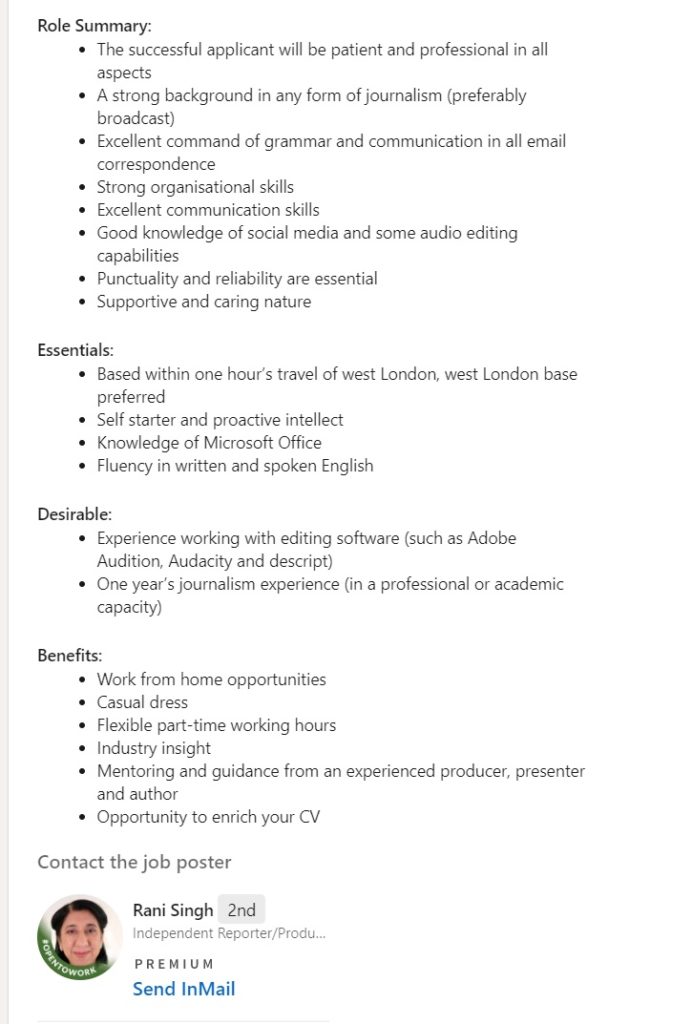 And here is how Ms Singh lists her work history on LinkedIn: 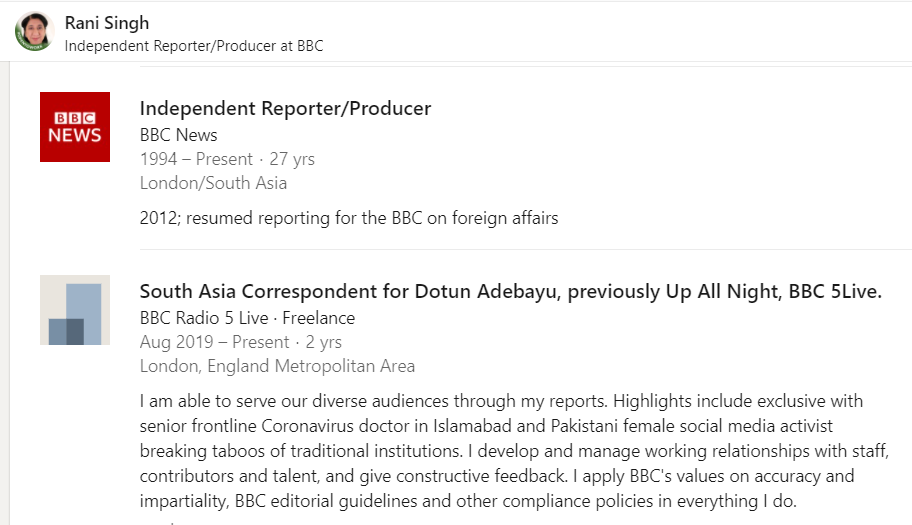 1) How do you feel that the ‘Assistant journalist’ role that you have advertised on LinkedIn fits with the UK’s National Minimum Wage law?

2) You state that this role is for a minimum of 3 hours per week – yet the description is clearly that of a full-time position. Please can you explain this discrepancy?

3) The role description is clearly not just work shadowing. Instead, it appears that this person will be doing a lot of real, useful research, reporting and administrative work to help you with your job – for which you are, presumably, paid. Can you explain how you justify this as fair or ethical?

4) Do you accept that unpaid work is always more accessible for those with the financial support to enable them to do it? Do you also accept that it is an additional barrier to those from disadvantaged or under-represented groups (including ethnic minorities) trying to get their career started?

6) I see that you have been working as a journalist for several decades. Can you explain how you are not aware that this sort of role is legally and ethically questionable?

Over the course of several lengthy replies, Singh said she was “a humble freelance” who had “made mistakes” and is “prepared to learn.” She agreed to disable the advert (which she has done).

However, as the correspondence continued, she declined to apologise, and produced increasingly impassioned justifications for her actions, suggesting that we speak to previous young people who she had hired for this sort of role.

Umm… what? How many have there been?

It is still unclear how many people Singh has hired like this previously, and over what period. It is also unclear how she feels that this sort of role fits with the UK’s national minimum wage law, which clearly states that anyone doing useful work must be paid for their labour, and they do not have the right to decline the pay that is due.

What is clear is that Singh had not done her research before hiring young assistants, either this time, or on previous occasions. Her passion for helping young people (if, indeed, you buy that) has triggered an abdication of duty to be a responsible employer (and yes, that is what she is here, even though she disagrees).

Her messages are too long to reproduce here, but here are some excepts:

“This is the first time that I have heard of anyone getting “Alarmed” -most not only stay close to and fond of me, but they also say that the experience helps them understand, learn and give them opportunities they would not have otherwise have had.

“I care very much about who is with me and take extra care of them as they are generally at the start of their careers and our industry can be tough so I want them to have confidence and only do what they feel able to do. I teach and encourage with patience as I feel a good start will help them and I want them to feel able to  achieve their potential.

“I would like to know please if anyone did complain, if they fully understood the role and also if it was properly explained to them- that could be another mistake on our side and this is partly where I made  some mistakes in the ad in the wording.  I do however understand and appreciate your intentions Tanya as at all levels, freelancers of any age would appreciate your support.  Some people have applied with absolutely no journalistic training whatsoever and I do appreciate some journalistic study experience, even one term or one basic module.

“If anyone has complained to you, then they have not done their full discovery either with us and I urge them to do so.”

At one point, Singh says that some of her previous assistants were working for her as credit for their course. If true, the minimum wage law allows for this – but it should be specified in the advert, which it is not. It also became apparent that the job description itself may have been written by a previous assistant:

“The list of tasks in the ad that the current helper has compiled with me covers the full range of tasks that may be covered in total, not in a week or a month, but that might happen along the way of the experience at some point. Some never get done at all.”

In further messages, Singh implored us to interview her previous assistants:

“There are a whole set of colleagues who have completed their terms with me who would be prepared to testify as to why they chose to join me, how long they worked for, why they stayed, what they enjoyed, what they learnt, how I am, my character, etc. Each and every one can be approached and independently interviewed, leaving no one out.”

She also suggested that we speak to her current assistant:

“He is actually doing the work, and is the clearest bellweather of what is happening. He is independent, knows his own mind, and only does what he wants to do. No more accusations should be made without checking the actual position on the ground please.”

What are our conclusions?

“As awful as Rani Singh’s advert is, this is not the kind of name-and-shame story that I enjoy doing. Generally, it is more beneficial to target big employers, and famous names.

“However, as the Class of 2021 is set to join the job market this summer, we need to talk about how smaller employers are behaving, and what shape this informal internship / work experience market is taking.

“My fear is that we will see lot of people like Rani ignoring the law and ‘doing their own thing’ – setting their own terms for hiring assistants. But their certainty that they are doing a good thing is not good enough. Employers must take the time to educate themselves about the facts – and their legal and moral duties – before advertising any sort of vacancy.

“If you are considering taking on an intern, volunteer assistant, or whatever you want to call it, that will make you an employer – and, as an employer, you have to abide by the UK’s national minimum wage law. You can give all the excuses in the world, but that is a fact.”

Graduate Fog has written to the BBC to flag our concerns about Rani Singh’s conduct. We will let you know when we hear back.

* GRADUATES – WHAT DO YOU THINK OF RANI SINGH’S ADVERT FOR AN UNPAID ‘ASSISTANT’?

Have we been to tough on her – or not tough enough? Have your say below…