Oxfam defends its right to use unpaid interns 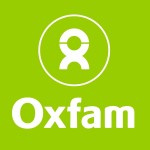 Oxfam has told Graduate Fog that it has no intention of reviewing its policy on using unpaid interns — and insisted that its ‘voluntary internships’ are fair and open to all, despite paying expenses only.

Do charities have a moral obligation to pay their interns — even if they have no legal responsiblity? Last week I stirred up hornet’s nest in a Comment is Free article on the Guardian’s website (Are charities unpaid interns really ‘volunteers’?)

If you missed the debate, here are the facts. A loophole in the national minimum wage (NMW) law says that charities needn’t pay their interns — as they can claim they are ‘voluntary workers’. But I’m concerned that many charities are using this to secure large numbers of young, educated workers to perform junior admin roles for free. In my opinion, this is not true volunteering. I’m also concerned that making internships part-time (as Oxfam do) doesn’t add up. If you’re working three days unpaid and four days for the NMW (what most casual jobs pay) you’re working seven days a week – and taking home less than £190 per week. Before tax.

We have had and continue to have a very diverse pool of interns. We work with a number of interns from a range of backgrounds, and in a range of economic circumstances. One of the common mistakes that people make is to think that our internships are only open to, and only applied for by young people and graduates. In fact, people at all life stages and circumstances undertake the roles.

A key feature of this scheme is that opportunities are always offered with flexible, part time hours. This is a key distinction between our paid roles and part-time roles, and is a feature that we consciously promote in order to ensure that individuals are able to work and earn a wage at the same time as undertaking a voluntary internship.

Our voluntary internships are very clearly ‘voluntary’. All tools associated with these roles, such as application forms, role profiles etc. are completely different from those used for recruiting and managing paid members of staff. However, one of the key features of our voluntary internship scheme is a meritocratic selection process (rather than taking on people because of ease of circumstance or promises of working long hours). In order to ensure that this meritocratic process is used, some structure to the application process (closing dates, role profiles) is required.

We campaign actively around the minimum wage and take very seriously the impact that voluntary roles can have on the diversity and fairness of our organisation. We ensure at all times that voluntary internships will benefit the individual at least as much as it does our organisation. The role of intern with Oxfam is always project-based, giving them the chance to work on something relatively high-level and meaningful, and to develop their skills.

Thanks for this. Just two more questions:

1) Can you tell me what percentage of Oxfam’s UK office-based ‘voluntary internships’ are currently occupied by people under the age of 30? (ie not including shop managers).

I’m afraid I was a bit to hasty in saying we can get that figure: we do not actually know our interns’ age as it is not something we ask when in their application form and not at any stage after they start the role.

I’m happy to reveal that I am now a paid member of staff after having started as an intern.

Thanks for this – but I’m a little confused. You said – with great confidence – in your previous email that your voluntary internships are taken up by people at “all life stages” So how do you know that if you don’t keep records of people’s ages? Do you have this information or not? It seems a little contradictory that you can say for certain that you have voluntary interns of all ages – but then when I ask for details about the number below 30, you are suddenly unable to find this information.

Congratulations on securing paid work with Oxfam. I know a lot of my users will be very envious!

We have empirical evidence that there are over-30 interns (I have met and worked with many myself) but I can’t provide you with a certain figure as that would be based on assumptions rather than data – as explained we do not ask for age when recruiting (both paid staff and interns).

Clearly, Oxfam is one of Britain’s best-loved charities and does a huge amount of excellent work. However, I am concerned that their policy on using unpaid interns is damaging to their excellent reputation. This exemption to the NMW law was designed to protect genuine volunteering — but I don’t think that’s what their interns are doing.

I also fail to see how these internships can be occupied by people of all backgrounds. Even those that are part-time are problematic. If your unpaid internship takes up three days, that leaves four days to work for money. Most casual work (especially for the young) pays minimum wage, so these interns will effectively earn less than £190 for working a seven-day week — before tax.

We all know that charities are facing tough challenges at the moment. But using unpaid interns to cut their costs should not be an option. A charity should factor in its necessary staff to its running costs. More senior, full-time employees at these charities are not expected to work for nothing to prove their dedication to the cause. So why is it fair to expect this of junior workers?

*Should Oxfam pay their interns?
What do you think of Oxfam’s statement about their use of unpaid interns? Do you agree that their voluntary internships are fair and open to all — or are poorer candidates likely to be excluded from these opportunities? 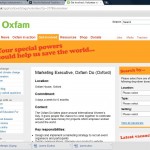 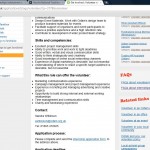 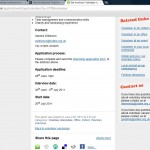 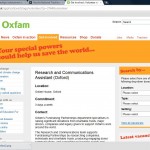 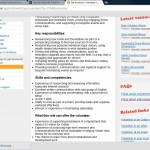 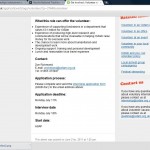