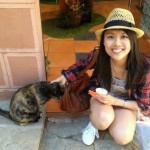 Topshop boss Sir Philip Green is used to getting his own way. So, when he told the Evening Standard last month that one intern had “spoilt it” for the others by complaining about working at his company for free, he probably thought he’d heard the last of her.

But he should know better than to cross an angry intern. Straight after Green’s interview was published, 25-year-old Emily Wong hit back, telling Graduate Fog that the billionaire’s comments were “an outrageous insult to young workers everywhere” and insisting “It took real guts to come forward and ask for what I was owed.” And today Emily has gone a step further, giving evidence at an important London Assembly summit on internships, held at City Hall, the London Mayor’s official office, where her testimony will be documented in a formal report urging the Mayor, Boris Johnson, to do more to support quality internships in London.

The London Assembly Economy Committee met this morning for a meeting called “Are internships just for well connected graduates?” It heard from interns from a range of sectors about how they applied for their internship, what experience they gained and the challenges they faced working as an intern.

Joining the interns were Ben Lyons from Intern Aware, Katerina Rudiger from the CIPD, Mark Kleinman from the Greater London Authority and Colum McGuire from the NUS. Representing employers were Victoria Harrison-Cook from Transport for London, and a spokesperson for the online fashion brand ASOS. Emily was unable to attend in person, but submitted this written evidence seen by Graduate Fog:

“I spent four weeks in the press office department for Miss Selfridge. Day to day work would be packaging and sending merchandise, photocopying/scanning, running errands, and lots of tidying the ‘sample cupboard’. The work rarely changed throughout my internship period, and when I asked for more tasks the team would at times struggle to find them.

“There wasn’t much of a structure to the internship. With about 6-8 interns in the Press Office department at one point, there weren’t even enough desks or chairs to accommodate everyone. It became clear there was a steady stream of interns to complete the tasks which otherwise they would’ve have had to hire a junior press officer for.

“Granted, in order to gain experience, interns do a number of basic tasks, but there was no development in our learning and it’s clear that the end result with Arcadia wouldn’t be a job as there’s another intern to take your place.”

Graduate Fog is inspired by Emily’s courage and determination against Sir Philip Green, who is immensely wealthy and powerful. It is not clear how the London Assembly will use her evidence, but we very much hope it will contribute towards a fairer system for interns throughout the UK, and to a world in which billionaire bosses will think twice about picking on their junior members of staff who dare to question why they are working for them for free.

*WHOSE SIDE ARE YOU ON?
Is it true that Emily ‘spoilt it’ for others, by complaining about her unpaid internship at Miss Selfridge? Or are you pleased to see interns sticking up for themselves?