Are all unpaid interns really ‘rich’? Not in our experience 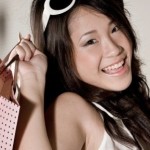 MOST ARE SKINT – AND INACCURATE STEREOTYPES OBSCURE THE TRUE VILLAINS IN TODAY’S JOB MARKET: THE EMPLOYERS WHO EXPLOIT YOUNG WORKERS

According to much of the mainstream press, it’s a fact that you have to be ‘rich’ (or even ‘super-rich’) to be an unpaid intern. But is that really true? From what we hear, many unpaid interns are far from rich. You tell us you’re desperate, exhausted – and skint.

Graduate Fog has always felt that grouping young job-seekers into ‘rich enough to work for free indefinitely’ and ‘too poor to work for a single day unpaid’ is unhelpful. One, because it divides young jobseekers, setting you against each other when you are much stronger campaigning on this issue together (after all, even ‘rich’ interns are being exploited. Why should they work for free, just because they can afford to?). And two, it’s unhelpful because it simply isn’t true that all graduates fit into one of these two categories.

Author and broadcaster Owen Jones, who tweeted yesterday in response to new research from the Sutton Trust

Or those who can find enough evening or weekend work to cover their costs for six months, but who are too exhausted to sustain the lifestyle for longer. Or those whose parents have no money, but who happen to live near to where the best internships are, meaning they can live rent-free and only need to cover their living costs. Or those who have taken out a loan to cover this period of unpaid work, which they pray will turn into a paid job before the money runs out.

These ‘middle ground’ interns may have more financial flexibility than those who can’t afford to work for free for a single week, but they are still far from ‘rich’. 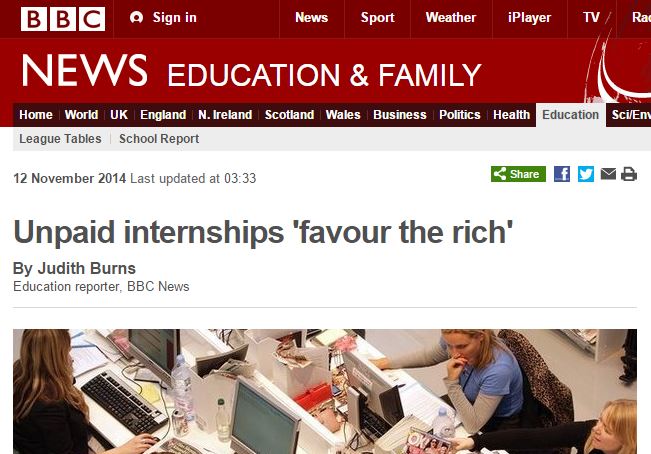 This stereotype isn’t just lazy – it’s dangerous too. If we make ‘rich kids’ (and their ‘rich’ parents) scapegoats, we risk taking our eye off the real villains: the organisations that ruthlessly exploit young workers who are so desperate to gain experience that they will work for free (locking out their less well-off friends in the process). 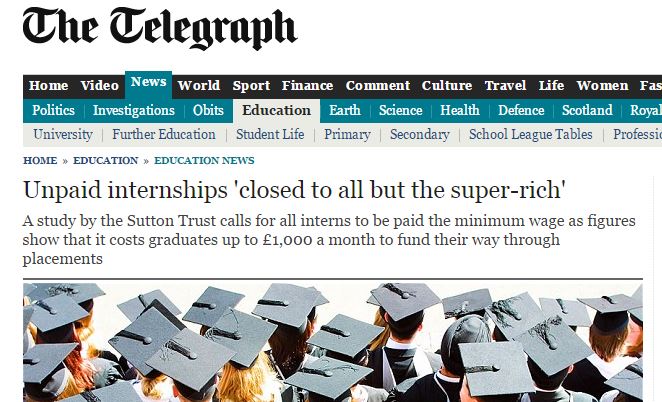 How the Telegraph handled yesterday’s news

And what about our politicians, who continue to turn a blind eye to this huge issue for young people because they think most of you won’t bother to vote? And the officials at HM Revenue and Customs, and the Department for Business, Innovation and Skills, whose flawed and badly-run reporting system helps too few interns gain the justice they deserve? (Want to claim back pay for a past unpaid internship? You’re better off contacting our friends and fellow campaigners Intern Aware).

Fans of this ‘rich-kid intern’ stereotype should also remember that the Daily Mail has long since been a supporter of fair pay for interns, as have the Times and the Telegraph. They have run dozens of news stories and features about the injustice of unpaid internships. Why would they do that, if all their ‘rich’ readers and their ‘rich’ parents were perfectly happy with a situation that’s working out well for them, as some commentators insist?

The reality is that only a very small number of families can afford to fund their graduate offspring working for free indefinitely, especially in London. Increasingly, unpaid internships work for nobody except greedy employers, who continue to get something for nothing.

And just because your parents have some money, or you can somehow find a way to survive for a few months on no pay, why does that mean you shouldn’t be paid for your work?

Your personal finances are none of your employer’s business. Whether you’re ‘rich’, ‘poor’ or somewhere in the middle, your employer has a moral and legal responsibility to pay you a fair wage for your work. Let’s not divide young people. Let’s remember who the real villains are.

*IF YOU’VE INTERNED UNPAID, ARE YOU ‘RICH’?
How did you support yourself while you worked for free? What about your fellow interns? Were they rich – or skint?