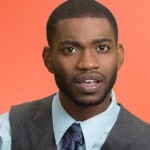 * OOH! THIS STORY HAS BEEN PICKED UP BY POLITICS BLOG GUIDO FAWKES

Politicians are being warned not to use the general election to take advantage of young people desperate to start a career in politics, after a flurry adverts has appeared online recruiting dozens of ‘campaign volunteers’. But are these true volunteer roles — or just unpaid internships by another name?

First things first – Graduate Fog has no problem with genuine volunteering, and we understand that political campaigning is always powered by local people so passionate about their party that they donate their time for free.

However, we have five years’ experience of reading adverts like this — and alarm bells are ringing. 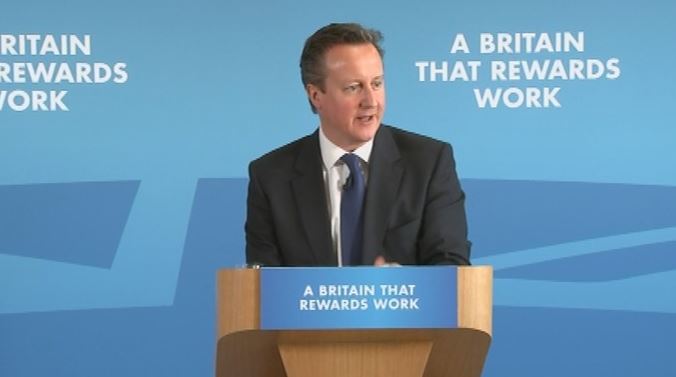 The Prime Minister outlines his vision for “A Britain that rewards work”, 17 February 2015. Unfortunately, this does not appear to include election interns.

In particular, we note that many of the adverts seem to be aimed squarely at young people, stressing the chance to ‘gain experience’ and ‘build your CV’. Why would a true volunteer care about either of those things?

All the positions advertised carry a footnote explaining that these are ‘voluntary’ roles with no set hours. But again, is this really true?

Are interns at the Conservative Campaign Headquarters (see advert below) really free to saunter in and out as they wish? Having spoken to interns on previous political campaigns, that seems unlikely. (They all say they worked like dogs). Only ‘lunch and reasonable travel expenses’ are paid.

In another advert – for Westminster North Conservatives, below – they explicitly state that the role would suit “a student, recent graduate or an individual who is looking to learn more about how political campaigning works”. The salary for this one? ‘Travel expenses within London’. 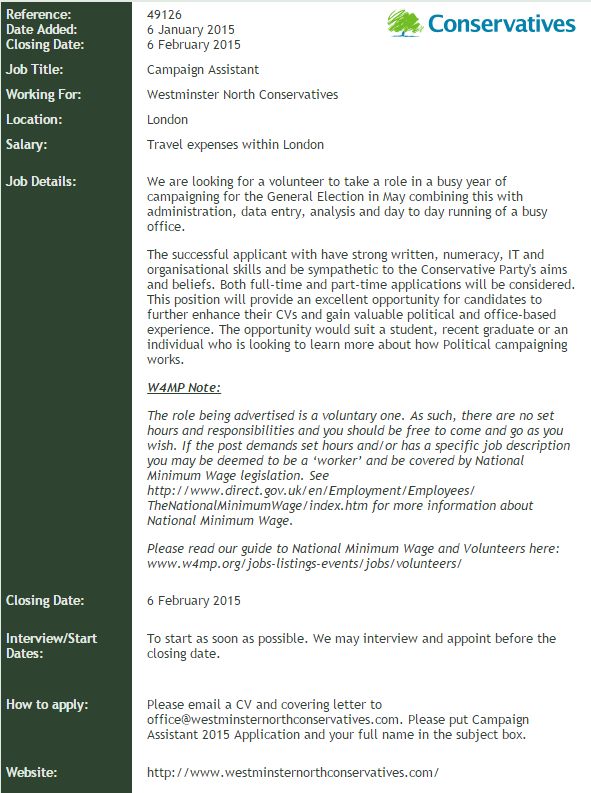 The adverts jar with the Prime Minister’s recent rhetoric on pay and young workers. On Tuesday, he said that work “must always be rewarded”  and last week he told businesses that they must pay their workers more: 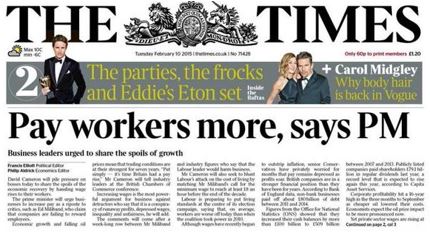 These are not just work shadowing roles. Many of the adverts provide long lists of duties the volunteers will be expected to perform. Others list the requirements that applicants must demonstrate. Thankfully, not all recruiters are so demanding. The Wakefield Conservative Association is just looking for someone with “a good grasp of the three r’s”, who likes curry and beer: 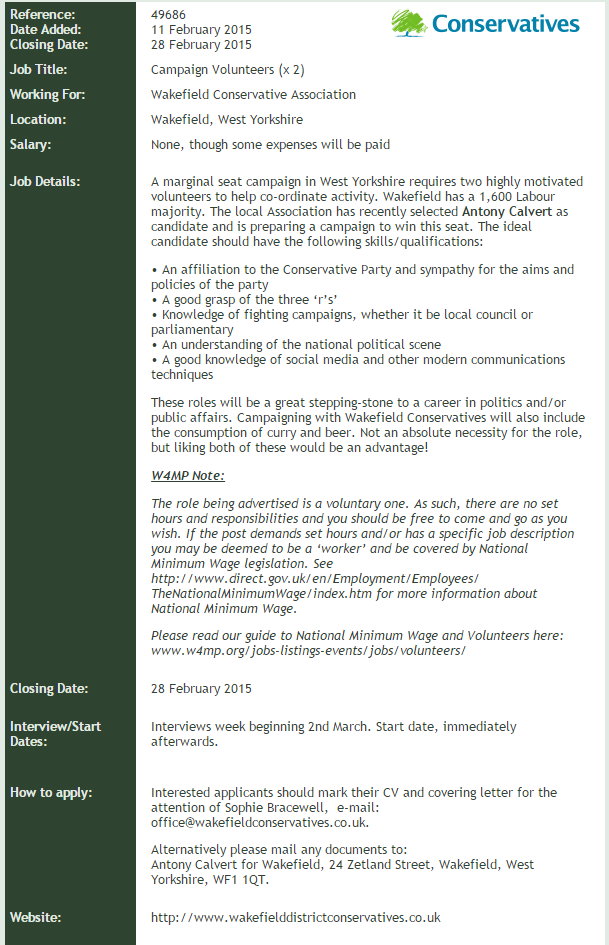 Graduate Fog would like to remind those recruiting for these roles that it doesn’t matter what you call a role, or how carefully you word the advert (whatever was in that 2013 Conservative Party memo advising members to re-brand interns as ‘campaign volunteers’, to avoid the risk of ‘potential hostile questioning’). The only thing that matters is the reality of the position, once it starts. 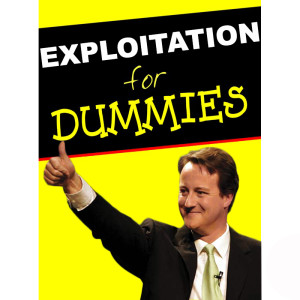 In December 2013, a Conservative Party memo was published advising members to re-brand their interns as ‘campaign volunteers’ to reduce the risk of ‘potential hostile questioning’. This wasn’t the memo’s cover, but it should have been.

If it turns out that these ‘campaign volunteers’ DO in reality have set hours, and set responsibilities, can’t come and go as they wish and are doing real work, then it is likely that they will be considered a ‘worker’ under minimum wage law.

If that is the case, they must be paid. They can’t waive their rights to pay, even if they say they are happy to work for free. Anyone who allows someone to work for free can be made to award them back pay if they later decide to claim the wages they’re owed. The employers’ name will also be published by HMRC.

And finally, we have a message for all campaign volunteers and parliamentary interns. If you signed up for a ‘volunteer’ role and it suddenly starts to feel like a proper job (with set hours and set responsibilities), get in touch with us. We’d love to hear from you and all correspondence will be treated in the strictest confidence. 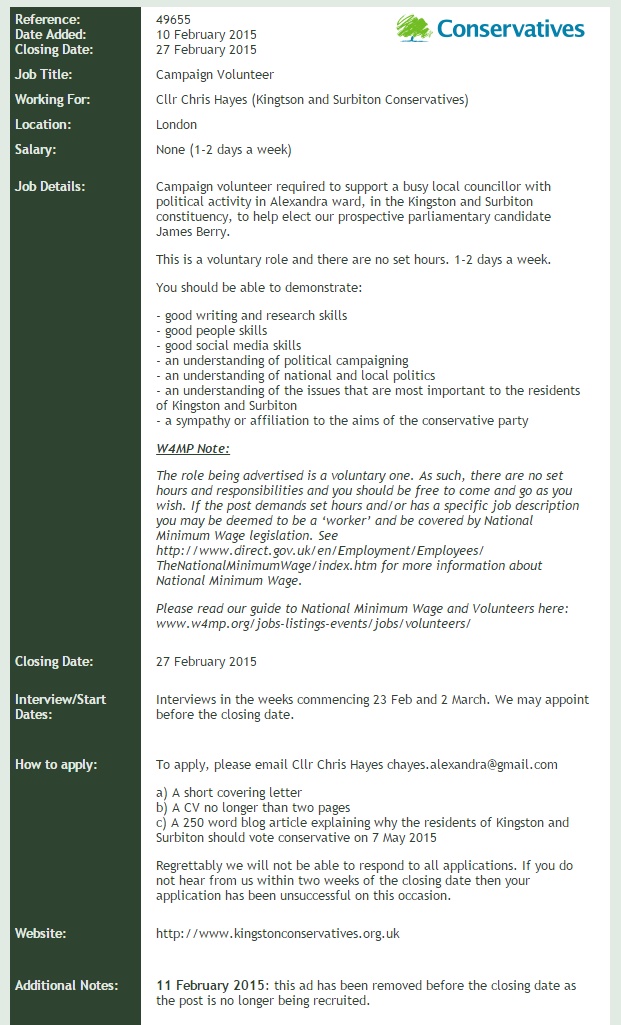 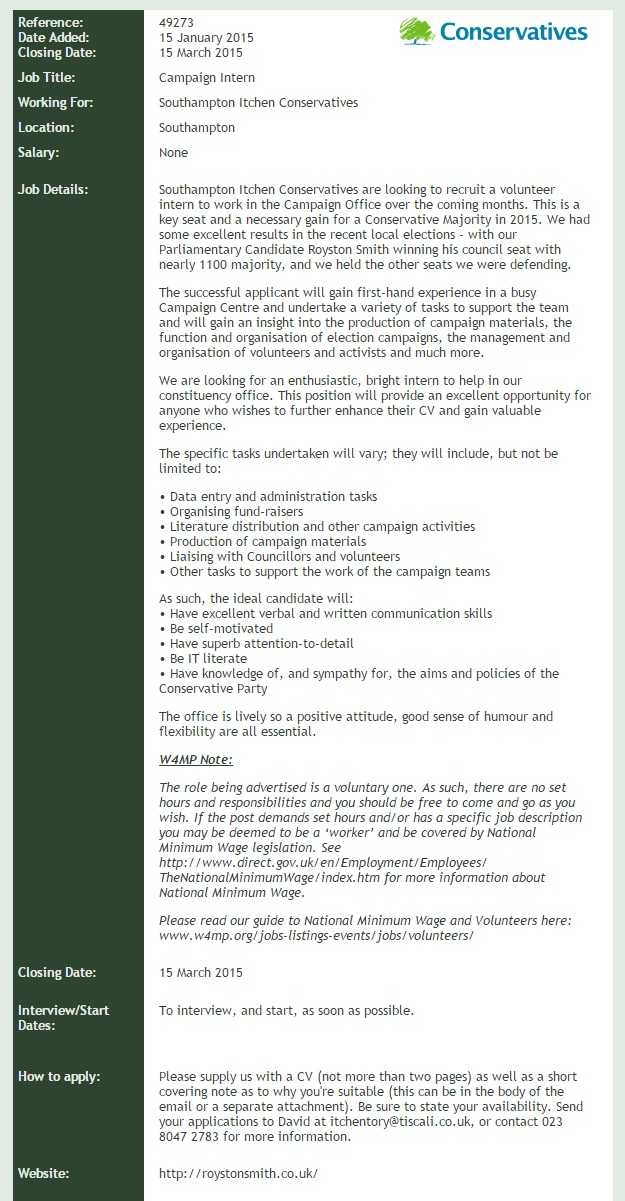 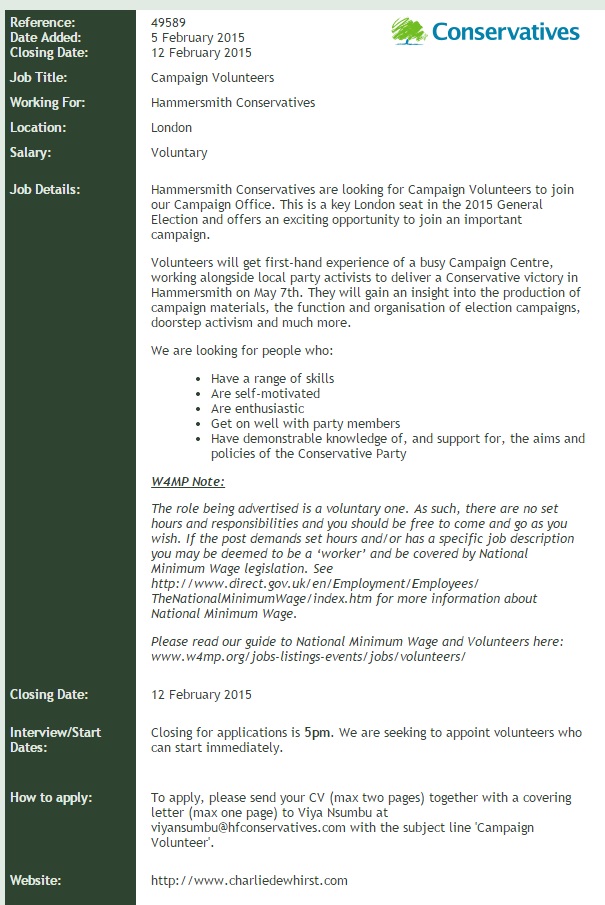 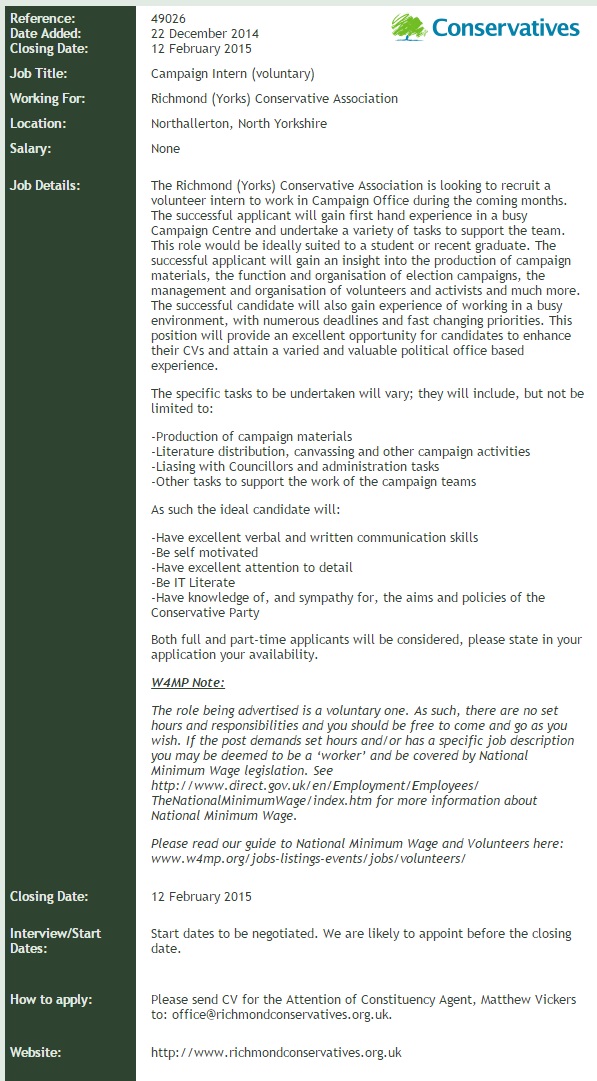 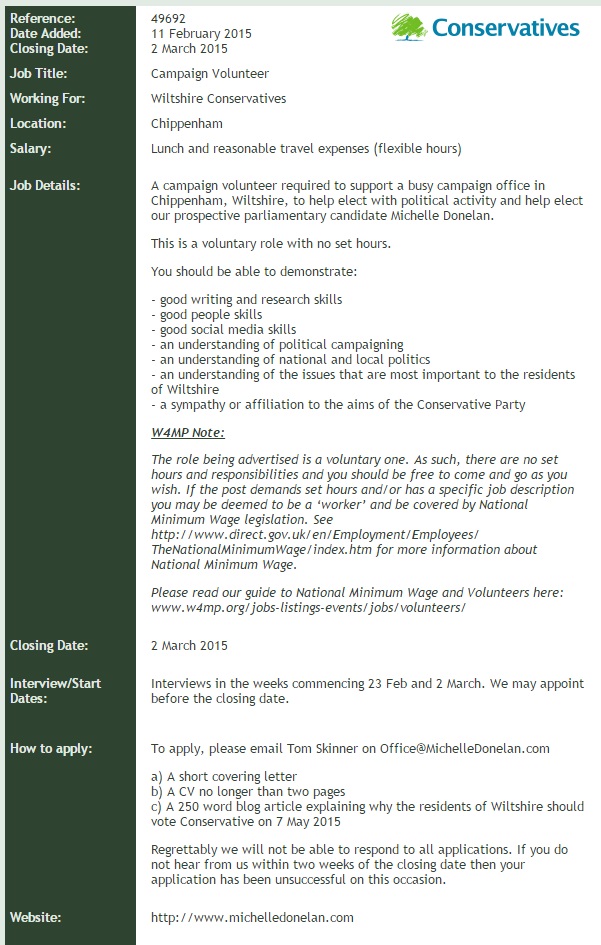 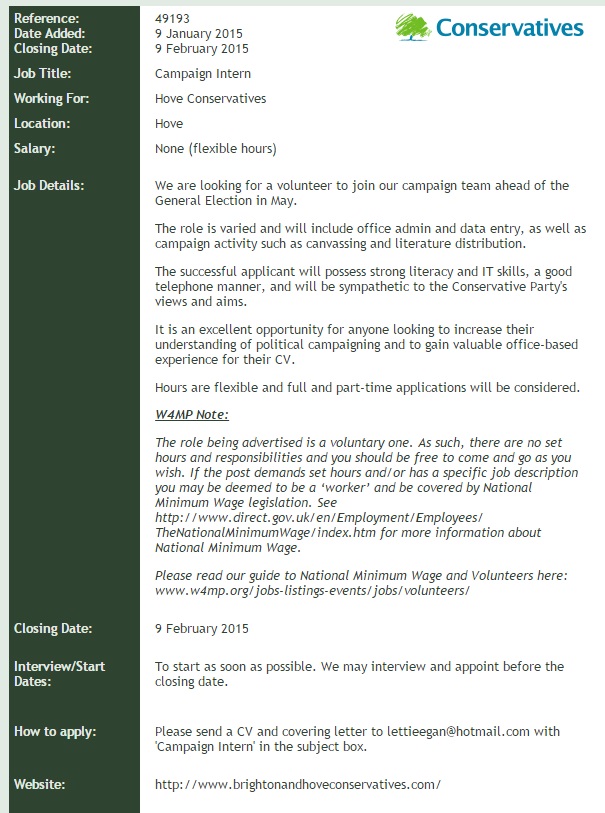 And these were the Lib Dem adverts we found (none from Labour as yet): 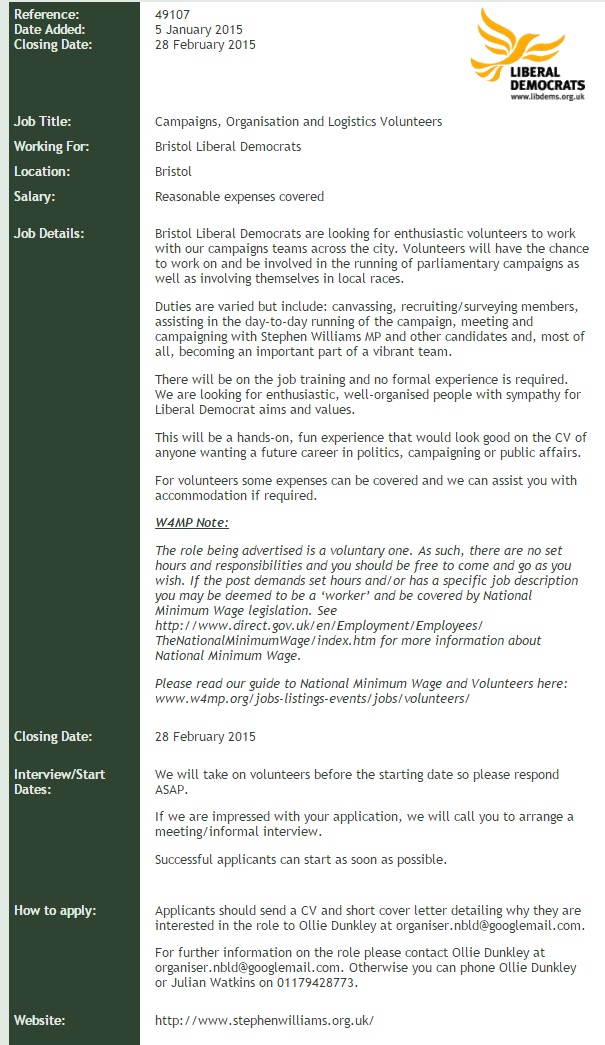 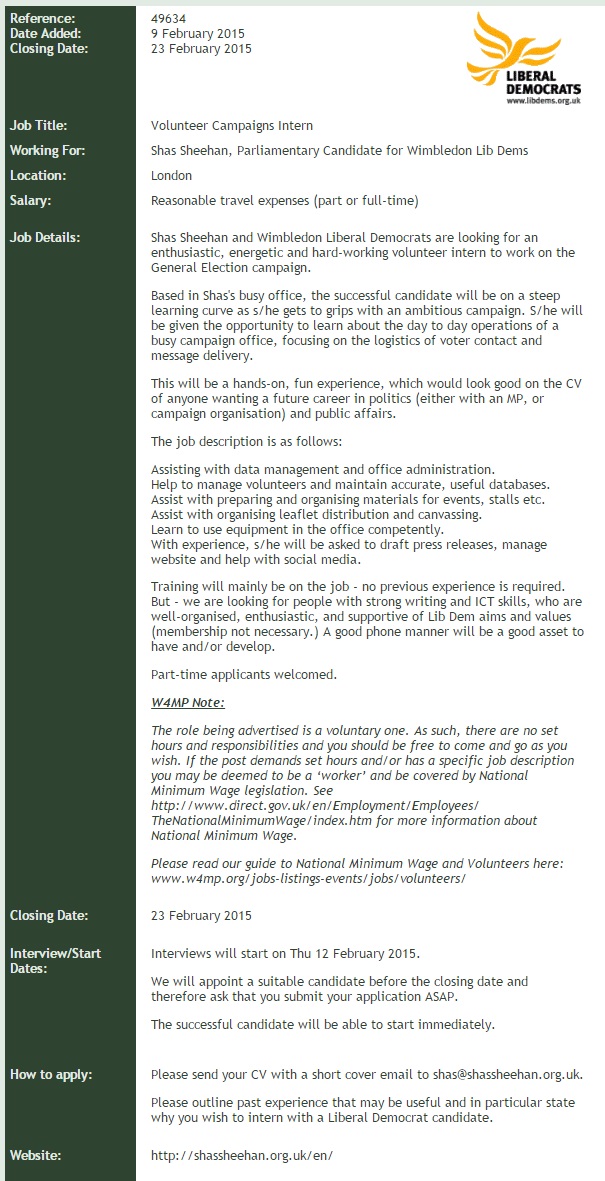