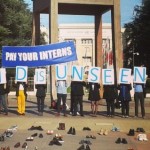 A peaceful protest against unpaid UN internships was met with a heavy-handed response from the organisation’s security team – with a journalist being told to delete photographs of the encounter, according to reports.

According to VICE News, 20 interns from various UN agencies had gathered in the rain yesterday outside the visitors entrance of the UN’s headquarters in New York, holding signs that collectively spelled “unpaid is unseen” to mark International Interns Day. The group was dispersed by security after entering the General Assembly building – at which time security personnel also told VICE to delete photographs of the scene.

The event was organized by a group calling itself the Fair Internship Initiative (FII), one of the main intern-run organizations that has advocated for UN agencies to offer paid internships, something the vast majority do not.

Many of the interns involved stressed they were campaigning not only on behalf of themselves, but for those without the means to pay for three or six-month trips to New York or Geneva – two of the world’s most expensive cities, where many of the organization’s intern positions are based.

Protesters laid out pairs of shoes, which they said represented all those who were unable to partake in UN internships without payment for their work.

Although the protesters did not have the correct permission to enter the building, VICE News reported that the UN security team’s response to a peaceful protest was unnecessarily intimidating, with reporter Samuel Oakford writing:

“After 20 minutes, most of the interns went inside the General Assembly building, where they hoped to take a picture. That’s when things got hairy.

“As the interns sat in front of a panel of portraits of the current and former Secretary Generals, a security guard approached them, saying that protests weren’t allowed inside the UN. They put away their signs and said they wanted to just take a few photographs together. The guard let them do that, but soon after two other security officers, from the UN’s Emergency Response Unit, in black clothes and wearing bulletproof vests, approached.

“The two guards began inspecting some of the signs that several interns still carried folded under their arms. VICE News, as it had for the previous half hour, began to photograph the encounter. Shortly after, the two guards told VICE News to “delete” the photos, saying that permission hadn’t been requested.”

Despite the distressing end to the protest, FII organiser Alessandro Greppi said things were looking up for their cause. He said FII had met with the missions of more than 15 member states, including the US, all of which expressed some level of support.

A UN spokesperson explained that political protests and banners are not allowed in the UN, which is why the protest was dispersed. However, he admitted that the organisation’s security team overstepped the mark by demanding that pictures were deleted – and that they would be reminded of the UN’s policy on allowing reporters to cover all events.

In August, a UN intern based in Geneva shocked the world by showing reporters that he was living in a tent outside the Swiss city, as he couldn’t afford to pay rent. Following international media outcry, David Hyde resigned from his internship, saying he felt it was his fault as he should not have accepted the role. At the interview, he had been asked whether he could support himself financially during the unpaid placement, and he had said yes. It is not entirely clear why the UN claims it cannot pay its interns.

Graduate Fog thinks the FII should have obtained the correct permission before entering the UN’s headquarters, and we are not surprised that security at the site is tight. However, we do feel that the UN’s response to a small, peaceful protest appears to have been disproportionate – and the VICE reporter should not have been told to delete his pictures.

But the main thing is that these protesters are doing something to take action on unfair, exclusive, unpaid internships that have become a huge problem for an entire generation. Campaigners like us and Intern Aware will continue to fight for your rights to be paid a wage for your work, but it is great to see groups like the FII finding their voice at last and we will back them 100% as their campaign continues.

* DID THE UN’S SECURITY TEAM OVER-STEP THE MARK?
Was treatment of the campaigners and reporter too harsh, or were the security guys just doing their job? Are you pleased to see young people taking action? Should the UN pay its interns a fair wage for their work? Have your say below!