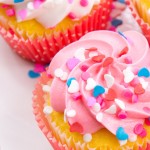 Seriously, what is it with The X Factor not paying people properly for their work? Some people just don’t learn.

Long-standing readers of Graduate Fog will remember that in 2011 we named and shamed them for their unapologetic use of unpaid interns on their in-house styling team. Following a public outcry and an official complaint to HM Revenue and Customs, several former interns received secret back pay cheques for their labour.

Then, in 2016 we revealed that low-paid runners on The X Factor were working such long hours (up to 17-hour shifts!) that they may have been toiling for less than the national minimum wage.

And now news reaches us that the makers of the show have shocked independent Liverpool baker Laura Worthington by asking her to ‘donate’ a cake to welcome back The X Factor judges at the start of the new series. This is the email that Laura, owner of Laura’s Little Bakery, received: 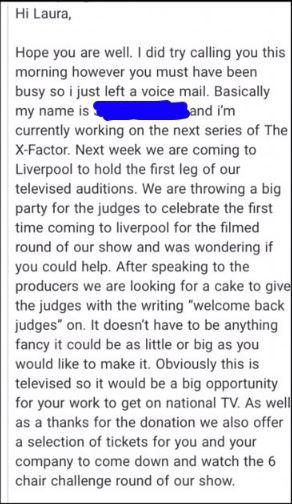 Happily, Laura was having none of it, and replied: 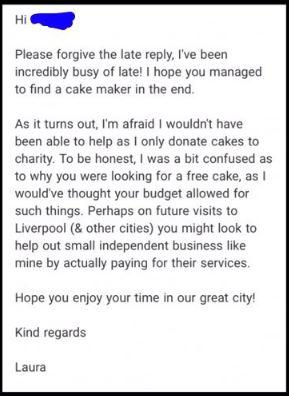 Laura, we salute you! However, the no-nonsense cake-maker acknowledged that some of her fellow bakers may have fallen for X Factor’s ruse, later finding themselves out of pocket for ingredients, labour and delivery and wondering why on Earth they’d just donated anything to one of ITV’s biggest and most profitable programmes: 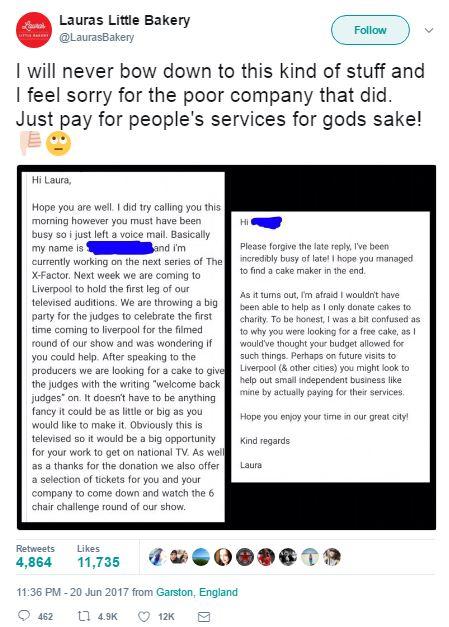 Laura, whose beautiful cakes are enormously popular and sell for up to £700, also told the Liverpool Echo:

“I see so much of this, usually from big businesses that have more money than I will ever see in my life time. I am a single mum, trying to run a business and it just really frustrates me.

“I fear they will have gone to someone, potentially someone who has just started out, who will see this as an amazing opportunity for them when actually the chance of them getting any recognition from ITV for this cake is very slim.

“It would be different if they were approaching big companies who can perhaps afford it, but it’s not on to expect freebies from small independent businesses who struggle to stay afloat on a daily basis.

“Charities are different and I will always donate where I can but because I feel strongly about the cause and just want to help as anyone would. But I don’t agree with any requests from companies for free things.”

A source close to The X-Factor said:

“This was an enthusiastic young member of the team trying to use their initiative in order to impress the rest of the team but it wasn’t appropriate.”

So basically, they’re blaming the intern. Now, why doesn’t that surprise us?