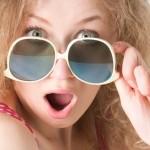 TODAY THIS WEBSITE PROMISES NEW PUSH FOR INTERNS IN 2019

A brilliant new report about unpaid internships has just been published – yet I can’t help feeling we’ve been here before. Many, many times. Don’t get me wrong – it is always helpful to have the problem spelled out so clearly, especially by an organisation with the gravitas and integrity of the Sutton Trust.

And it is great news that the report is attracting a tonne of press coverage. The bad news is that there isn’t much in it that the UK’s young job seekers – and your parents – don’t already know about this rotten system which has been allowed to continue for far too long.

Unpaid internships exploit those who do them, and exclude those who can’t afford to do them. Duh – we all know this. The only winners are the cheapskate employers, who continue to get something for nothing. (Oh, and universities, who can say their graduates are ’employed,’ even when they know you’re toiling for free. Oh, and the government, who can continue to say that expensive degrees lead to jobs, as you are classed as employed, as you can’t claim the dole when you’re interning unpaid).

Frankly, we’re tired of going over the same old ground, and being asked for comments and case studies by journalists. Let’s move this thing on. In my opinion, there are only two questions that need to be answered now:

1. WHY HAS THE CAMPAIGN FOR FAIR INTERNSHIPS STALLED?

Where is the help from those who are in charge of making sure that the UK works for young people from all backgrounds? We have begged for meetings with the Department for Education, but they have refused to meet. It is crazy they are doing so much work on helping children from poorer backgrounds to succeed at school and university, but are happy to see them fall at the final hurdle when they can’t take unpaid internships.

We started campaigning on this issue in 2010 – that’s nearly NINE YEARS AGO. Up to 2015, we made enormous progress, naming and shaming dozens of employers for having unpaid interns, educating the public on this issue, and creating a stigma around unpaid internships. Unexpectedly, several nice employers joined our campaign (including EY and KPMG), with the result that it is now rare to find a big employer of young people running unpaid internships. (The fact they run so many paid ones is probably why ‘only’ a quarter of internships are unpaid, according to the Sutton Trust report). In fact, today it is so rare to see big firms using unpaid interns that we have been able to make ‘No unpaid internships’ one of the entry requirement of joining our new Graduate Fog Employers Club. In short, for a while there it felt like we were winning. 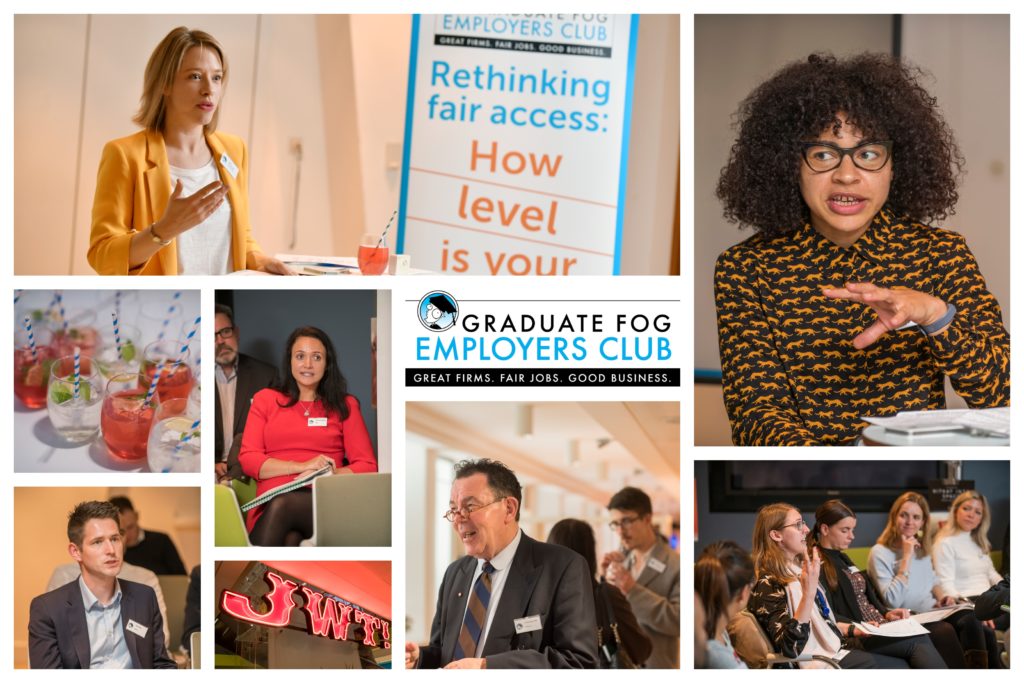 Our new Graduate Fog Employers Club only accepts Members who promise they don’t run unpaid internships. Most big firms binned these unfair placements years ago. Can they help us end them in ALL industries, in 2019?

However, despite making great strides within the corporate world, unpaid internships have been harder to eradicate in the more informal industries – particularly, fashion, media and politics. The start-up scene is still rife with unpaid internships – and too many charities continue to take advantage of a legal loophole that allows them to class their interns as volunteers. There have been some high points lately – Cancer Research UK becoming the first big charity to make all their internships paid, for example – but the campaign needs new energy and a new plan if we are to finish the job and end ALL unpaid internships in the UK.

The government must do more. The Sutton Trust report says so too. Employers and young people must be educated on the law – but that’s just for starters. We have a list of solutions to this problem – yet the Department for Education – which frankly should be begging us to come in – won’t even meet us. In the summer, we reported that they had finally agreed to a meeting. What we didn’t report was that when we asked them to clarify the agenda, it transpired they us to provide free consultancy about their (hopeless) Graduate Talent Pool website. That’s not the meeting we want, we said. They said tough, that’s the only meeting you’ll get. So then it was our turn to say no – and that’s how we’ve left it.

Happily, a new coalition is forming – and we have high hopes that this show will be back on the road by the Spring 2019. We have found support from Lord Holmes of Richmond, who is pushing for a four-week limit on unpaid internships (see our thoughts on that below). The Sutton Trust’s report injects extra energy and gravitas, and we know we can bank on support from several MPs including Stella Creasy, Chuka Umunna, Alec Shelbrooke and Jo Swinson.

And we have another secret weapon which we didn’t have before: a large number of big employers to call on to back this campaign. As mentioned above, very few large firms still run unpaid internships, thanks to a huge cultural shift and genuine concerns about the impact on diversity. In March 2018 we launched the Graduate Fog Employers Club, a coalition of good employers of young people, which includes KPMG, Virgin Money and Royal Mail. It is a condition of joining our Club that these firms must not have unpaid interns, so we will discuss with them how best they could lend us their support in 2019. 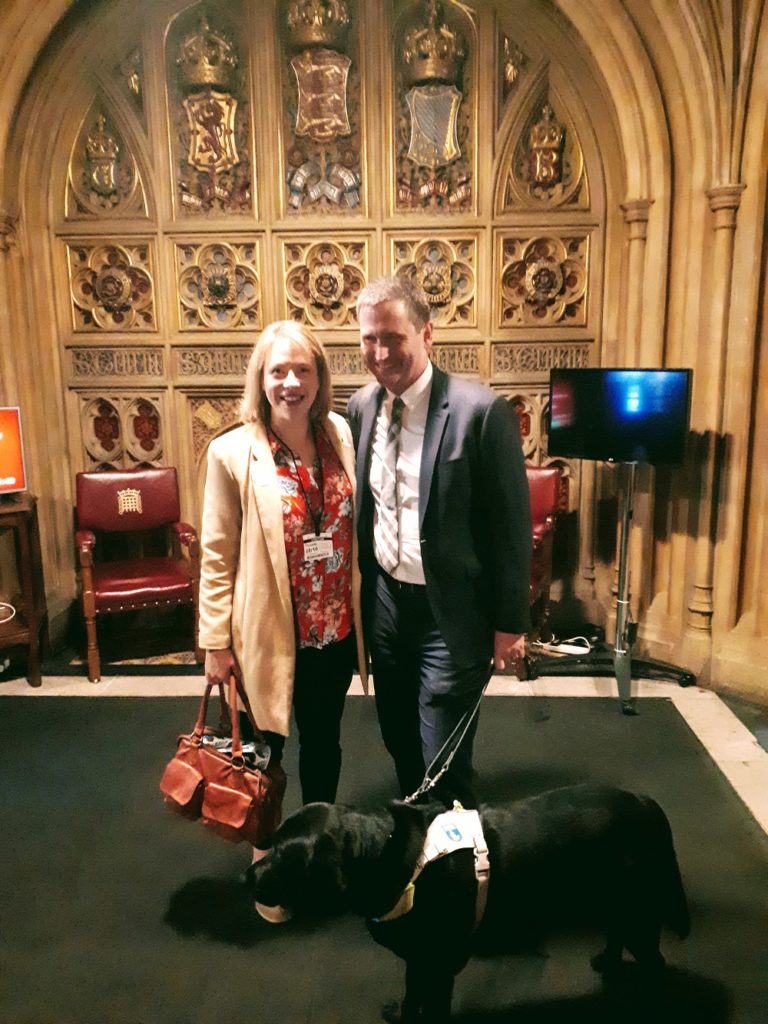 Graduate Fog’s founder Tanya de Grunwald with Lord Holmes of Richmond (and his guide dog Lottie) at the House of Lords, October 2018. The pair have vowed to call on all their contacts and resources to end unpaid internships by the end of 2019.

For everyone reading who is currently doing an unpaid internship, or is locked out of your chosen industry because you can’t afford to work unpaid, I am truly sorry you have been failed so badly. It is unacceptable that we have not been able to fix this problem sooner. We do not know whether the campaign has stalled because those in charge are not doing their jobs properly – or because there is simply no political will to get this problem fixed.

A word about the 4 week limit

We are often asked about our view of this reform – championed by Lord Holmes – so, for those interested, here goes…

We have always felt the law is clear and that the vast majority of unpaid internships are illegal as the person usually fits the description of a ‘worker’, having set hours and responsibility and doing work that would otherwise need to be done by a paid member of staff.

Our understanding is that the four week limit is not about ‘banning’ unpaid internships of more than four weeks, it is about meaning that any internship over four weeks is automatically considered one that should be paid. This means that the intern does not have to make a case describing what work they did, and what hours they worked, or wait for a judgement from HMRC. We certainly support anything that makes it easier for interns to complain, and results in more rogue employers being hauled over the coals.

Our problem is that even if the 4 week limit is announced, that doesn’t fix the problem of the reporting system – which we believe is not fit for purpose. Why? Because it relies on young people knowing unpaid internship are illegal, knowing how to lodge a complaint, and being prepared to square up to their former employer, which few will do for obvious reasons. We also know that the investigations process is far too slow – some cases take two years – and there is no visibility on how decisions are made, or what percentage of complaints result in action. Penalties for employers who break the law must also be tougher, to be an effective deterrent. To our knowledge there has never been a prosecution or even a fine for being caught. The worst that happens is that they are told to pay the intern the wages they should have paid them anyway – big deal.

We would also like to see the reporting system accept tip-offs from those who have not done the internships themselves. Why not create a hotline or email address where young people can submit details of unpaid roles they’ve seen advertised, but which they can’t afford to do? HMRC staff could then phone the employer and warn them that they must pay a wage for the role. We have thousands of eyes and ears out there – why not use them?