AND DOES DEMAND FOR “PHYSICAL FITNESS” EXCLUDE THOSE WITH DISABILITIES?

The BBC has been slammed for advertising two-week “work experience” placements at Wimbledon 2019 which appear to be unpaid, despite including duties such as “running errands; assisting film crews/radio reporters; collecting and distributing press releases/orders of play/running orders etc; meeting programme guests and escorting around grounds; general office duties; prop sourcing; assisting commentators including delivering refreshments.”

The advert – posted on the BBC’s own job board – states that applicants for the seven production placements “Must be available for [the] full run of Wimbledon, including set-up days: Thursday 27 June to Monday 15 June inclusive.” Unfortunately, the ‘job category’ is stated as ‘volunteering’.

Shame on the BBC offering “unpaid work experience” at Wimbledon – one of the apparently richest events in the calendar. Call them out https://t.co/XzK5dqjnbN

Graduate Fog has challenged the BBC over how they feel the planned placements at Wimbledon 2019 fit with UK employment law, and also with the corporation’s stated commitments to diversity and inclusion (our full email is below).

There seems to be no doubt that these positions will involve real work (in other words, they are not just shadowing). BBC Sport presenter Eleanor Oldroyd proudly described the placement as ‘exhausting’ when promoting it to her 32,000 followers – raising eyebrows on Twitter:

I would if it was paid. I know someone else who might, but he would want paying for it 🙂 @tannerman774 😌

Very exciting🎾opportunity! Work experience @Wimbledon with the BBC.
(I would have loved to have been able to apply for something like this) https://t.co/nN8n9iOzlp

Graduate Fog was also shocked to see a line in the ad stating: “Physical fitness is essential” – appearing to disqualify those with disabilities before they’ve even applied. Here is the advert in full: 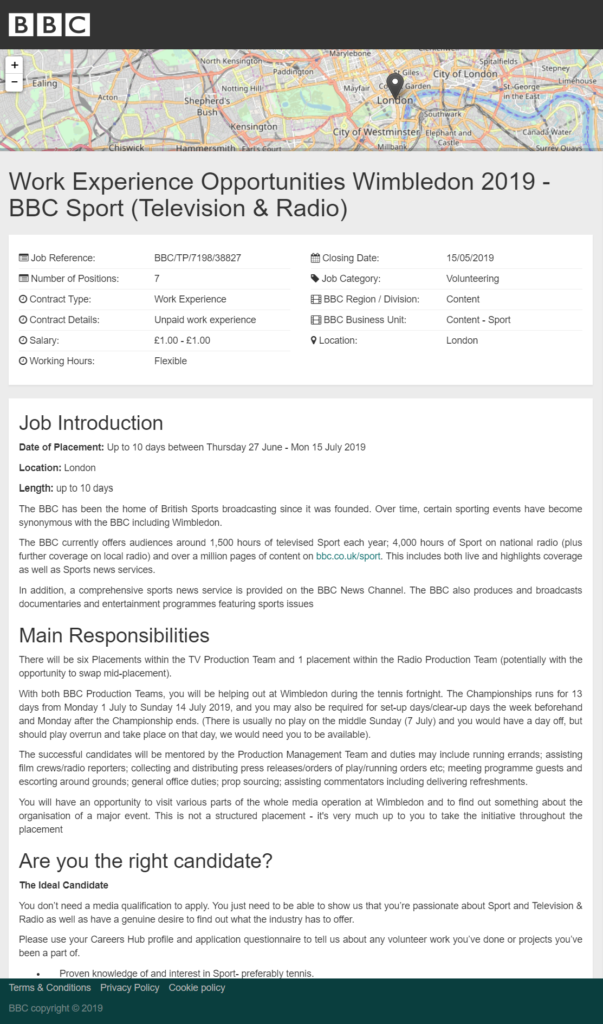 “This is not work experience – this is work. Okay, these placements only last two weeks – but they fail our fair internships test on both grounds: exploitation and exclusion.

“They exploit because the BBC acknowledges that successful applicants will perform valuable labour, yet the corporation clearly plans to take advantage of their desperation for experience by withholding a salary. And they exclude because the placements are out of reach to anyone who can’t afford to live in London for two weeks without pay.

“It’s also shocking that the author of the advert has spelled out a need for ‘physical fitness’. I’ve never seen that before – and I’m stunned that any big employer would write it in a public job spec in 2019.

“To make things worse, stated below the job description is the BBC’s supposed commitment to equality, including ‘social background’ and ‘disability’. Is this an episode of W1A? This clanger proves that in reality the corporation’s recruitment practices fall well short of its supposed values – and the process for creating and publishing truly inclusive job adverts needs immediate attention and revision. Frankly, this shoddy posting should never have made it into the public domain.

“In my opinion, these placements should pay at least the National Minimum Wage, and be open to everyone who wants to do them. It really is that simple. An employer like the BBC should be leading on this stuff, not getting caught out for tone deaf mistakes. We have asked the BBC to examine this advert and make the necessary changes so that these roles – and the way they are advertised – align with their stated values and commitment to equality, diversity and inclusion.”

Below is Graduate Fog’s email to the BBC, challenging their unpaid work experience placements at Wimbledon 2019:

It has been brought to our attention that BBC Sport is advertising seven work experience placements to coincide with this year’s Wimbledon tennis tournament.

Assuming this means that the placements are unpaid, I would be grateful if you could explain:

I am also troubled by the insistence that “Physical fitness is essential” for applicants. Can you please confirm that you do not wish to hear from those with disabilities which may restrict their mobility or stamina?

In my opinion, these work experience placements should be re-classified as junior contract jobs, paid at least the National Minimum Wage, and the BBC should take steps to make sure they are awarded to the best applicants regardless of their “physical fitness”. Should any of those seven have additional needs, the BBC should make the necessary adjustments. I very much hope that you will consider making the necessary changes so that is the case. This would also bring these roles into line with the BBC’s stated commitment to equality, diversity and inclusion.

Finally, if you agree that this advert falls below the standards that the public should expect from the BBC, please can you explain how this came about, and how you plan to ensure this does not happen again.

We’ll let you know when we hear back from the BBC. Watch this space…

* HAVE YOU DONE ‘WORK EXPERIENCE’ AT THE BBC?
Was it just work shadowing – or were you doing real work? Did you have set hours and set responsibilities?