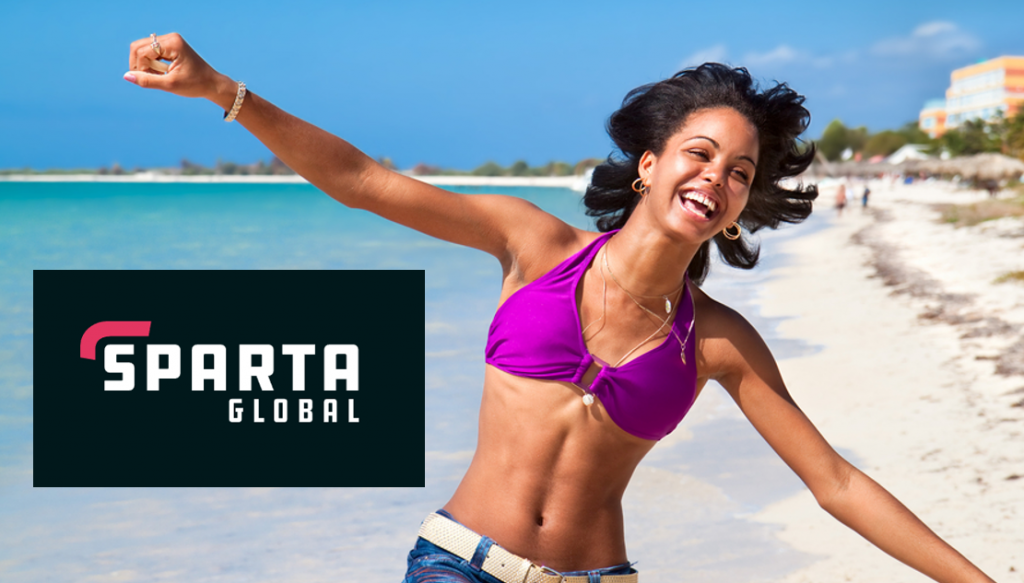 ‘RELIEF’ AMONG GRADUATES RELEASED FROM THEIR JOBS – THANKS TO OUR CAMPAIGN

Sparta Global has announced that their graduate employees will no longer have to pay large ‘exit fees’ if they quit the firm in less than two years.

The news follows a similar statement from rival tech firm QA Ltd a few weeks ago, and indicates that Graduate Fog’s ‘Stop Exit Fees Now’ campaign is piling pressure on bad employers scrap these horrendous fees, which serve to lock young people in jobs they want to leave, but can’t afford to escape.

In a message from Sparta’s HR manager at the end of April, Sparta graduates were told:

‘With immediate effect, Sparta Global will no longer invoke the provision to enforce the Academy training fee repayment detailed within your Contract of Employment.’ 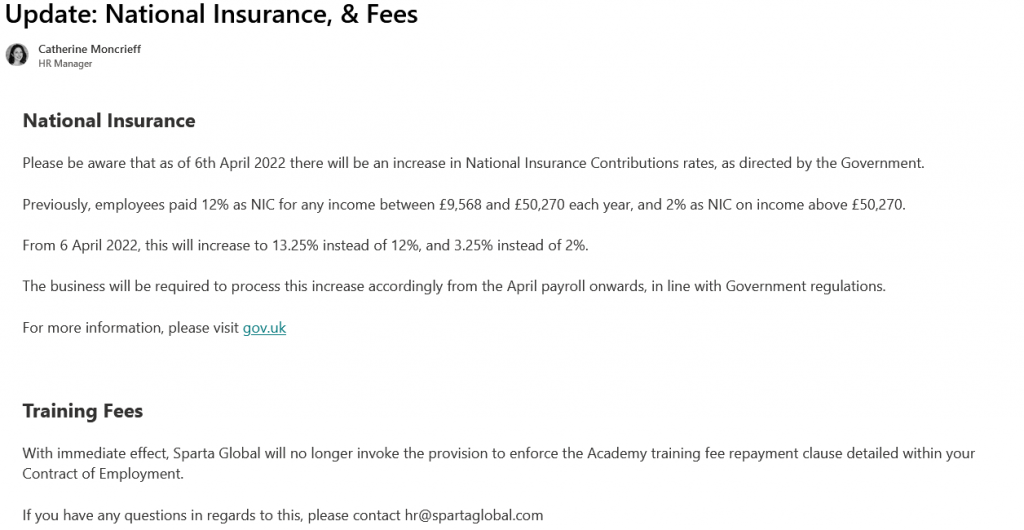 PASSPORT TO FREEDOM: This low-key message has enormous consequences for the Spartans who have felt trapped by the firm’s policy of charging large ‘exit fees’. At one point, graduates were told they would owe £20,000 if they quit in less than two years.

What prompted this announcement?

It is unclear. The graduates – known as ‘Spartans’ – were given no reasons behind this decision. However, insiders have told Graduate Fog that senior leaders at Sparta have been ‘sweating for months’ during the ‘sustained attack’ by this website’s Stop Exit Fees Now campaign, and fears were growing that bad publicity could hamper a planned sale to a bigger firm.

We are told that when clients such as Channel 4 started to distance themselves from the firm (again, thanks to our campaign), Sparta executives feared the brand was becoming ‘toxic’ and a decision was made to act. The auction house Christie’s told us they would never to use Sparta again, and mobile network Three said they had no plans to use Sparta again.

Why was Channel 4 ever a client of such a horrible firm?

Good question. As we reported in March 2022, it understood that around 10 Sparta graduates were working as IT consultants for Channel 4 at any one time between 2014 and 2019 on various tech projects, including the pre-launch testing of All4, the channel’s hugely popular streaming service. The Sparta graduates worked on site at Channel 4’s central London offices, and were even invited to the organisation’s Christmas party.

Shockingly, we have heard that graduates placed with Channel 4 during that period (2014 to 2019) had been told they would owe £20,000 to Sparta if they wanted to quit – meaning young people working on Channel 4’s premises during that time were effectively trapped in their jobs. (The exact amount owed depended on the length of time the graduate had worked at Sparta, and what training they had had. Sparta’s exit fees later dropped to £16,000, and were £8,000 before this latest announcement was made. (Scroll to the end of this post to see excepts from a 2019 Sparta contract).

Happily, when we drew Channel 4’s attention to this, they told us they would not use Sparta again, knowing what they do now. They agreed with our assessment that a firm cannot say it cares about social mobility and diversity, while continuing to use suppliers that charge huge exit fees to graduates who wish to leave. 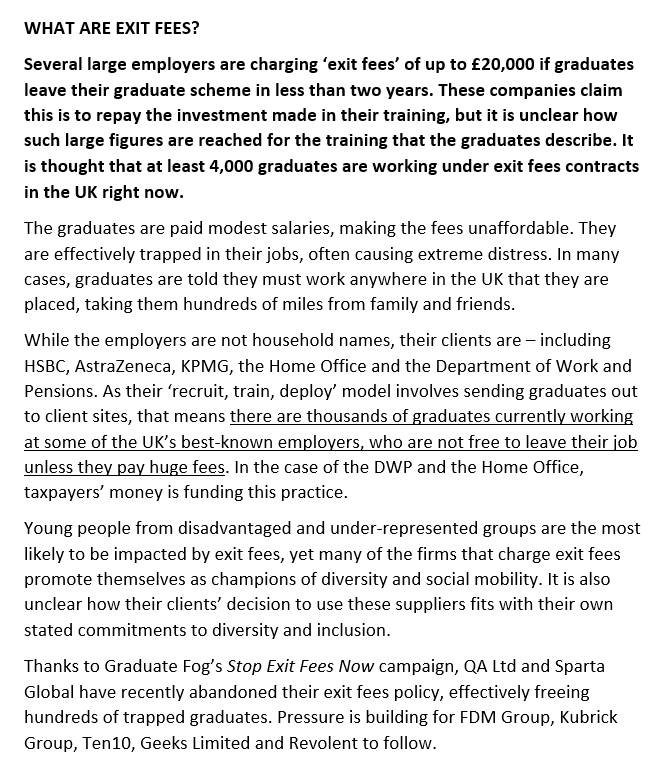 How have Sparta’s graduates reacted?

Graduates employed by Sparta (known as ‘Spartans’) told Graduate Fog of their ‘relief’ at hearing they are finally free to leave. However, few believe the firm is acting out of the goodness of their hearts and most suspect that client pressure was the deciding factor. One Spartan told Graduate Fog:

‘Exit fees were the one thing holding me back from looking elsewhere, so it’s a huge sense of relief and it’s nice to know there are other options now. This seems to be an opinion shared by other Spartans too. It’s a horrible feeling when you feel trapped in the role you’re in, knowing that you have sit it out for 24 months.
‘I’m glad Sparta have decided to scrap exit fees – but I question what caused this. I wouldn’t be surprised if it’s due to the pressure of current and previous clients.’
And another Spartan said:
‘On behalf of all Spartans, I’d like to thank Graduate Fog for your tireless work campaigning against exit fees. It has been deeply painful to hear clients pretend they don’t know what’s been going on (when we know they do) or they aren’t responsible for what has been happening (when we all know that clients hold the power). It has also been horrible to hear people say that exit fees are somehow a ‘grey area’ ethically, when the misery they cause has been very real to us, sometimes with consequences to our physical and mental health. Thank you for speaking up for us when we weren’t in a position to be able to advocate for ourselves.’

Why is this news significant?

Because it shows that the mood around exit fees is changing – and the big firms still clinging to the policy (namely FDM and Kubrick) are increasingly isolated. Graduate Fog’s founder, Tanya de Grunwald, said:

‘I’m delighted that Sparta has promised to stop chasing their graduates for exit fees – but I’m not going to give them a round of applause. It is outrageous that they ever operated this ruthless and disgusting policy, and they should be ashamed of the misery they have caused to thousands of graduates over the years.

‘I believe this announcement is significant not only for Spartans – but for all graduates currently trapped by exit fees contracts. Following a similar decision by QA Ltd, Sparta has effectively thrown the spotlight on the exit fees firms that continue to operate this policy.

‘In particular, FDM Group and Kubrick Group, seem increasingly isolated, as they appear to happy to continue to inflict misery upon their young employees. Smaller exit fees employers such as Ten10, Revolent and Geeks Limited are also yet to announce that they have stopped charging exit fees – but we have reason to think that at least one will do the right thing very soon.’

What has Sparta said?

Very little. We wrote the following email, but they have no replied. We’ll let you know if / when they do.

I understand from a number of sources that there have been some changes to Sparta Global’s policy on charging exit fees, and I would be grateful if you could answer the following questions:

* Is it true that Sparta Global has stopped charging exit fees to graduates who leave your programme in less than two years?
If so, when was this decision made, and what are the reasons behind this decision?
* How many current Sparta employees will be affected by this change? How has this news been communicated to the employees who will be affected by this change? Have new contracts been provided?
* During the time when Sparta Global employed graduates under contracts that included exit fees, were Sparta’s clients aware of the restrictions that these graduates were working under?
* Graduate Fog understands that a number of Sparta’s clients were deeply concerned by the heat generated by our Stop Exit Fees Now campaign and many started to distance themselves from your firm. Can you confirm that pressure from clients was a contributing factor to Sparta’s decision to drop exit fees?
* What would you say to those who view your decision to scrap exit fees as a desperate attempt to hang on to your clients and restore your reputation, now the heat has become insufferable?
* How many employees has Sparta employed under contracts including exit fees clauses, over the years? Will Sparta apologise for the distress (including mental and physical health impacts) caused to these individuals?
* In light of Sparta’s change in policy on exit fees, and the admission that exit fees can stand in the way of social mobility, does Sparta plan to repay any exit fees to former Sparta employees who paid up when they left Sparta? If so, how can these employees claim what they are owed by you?

I look forward to hearing from you

Can I see a Sparta contract?

Yes, here are excerpts from a 2019 Sparta Global contract, given to a 21-year-old who had just finished university. Needless to say, within a matter of weeks, he bitterly regretted signing it – but it was too late to escape… 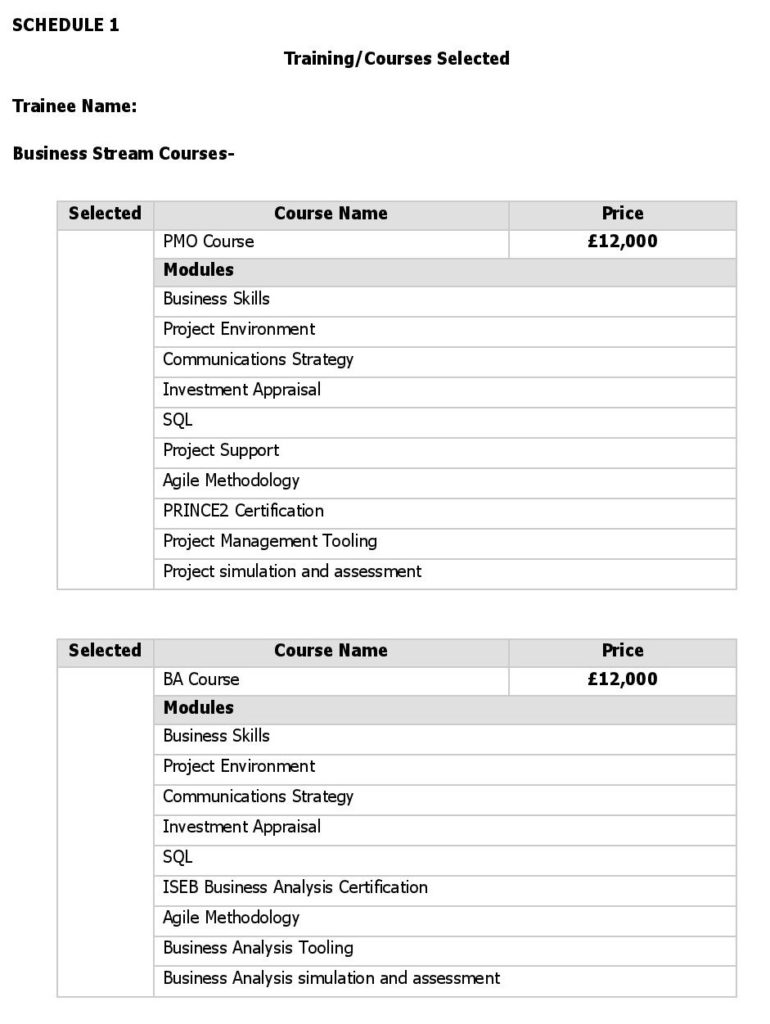 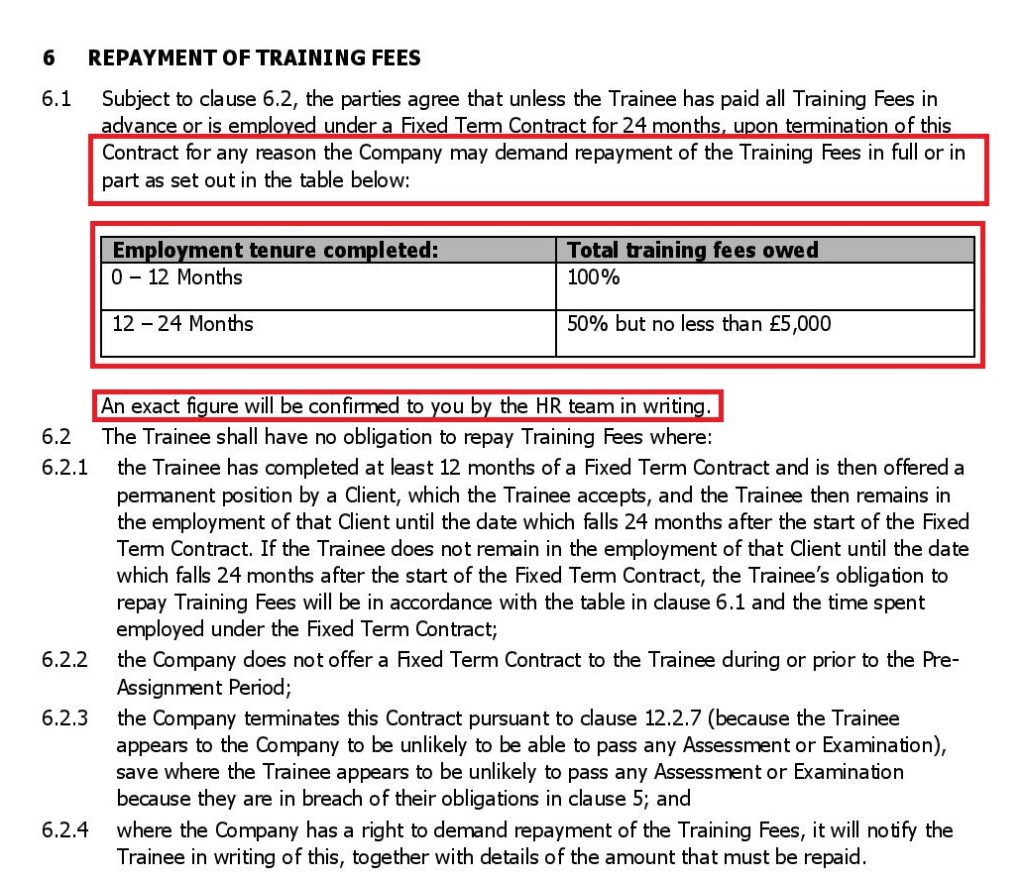 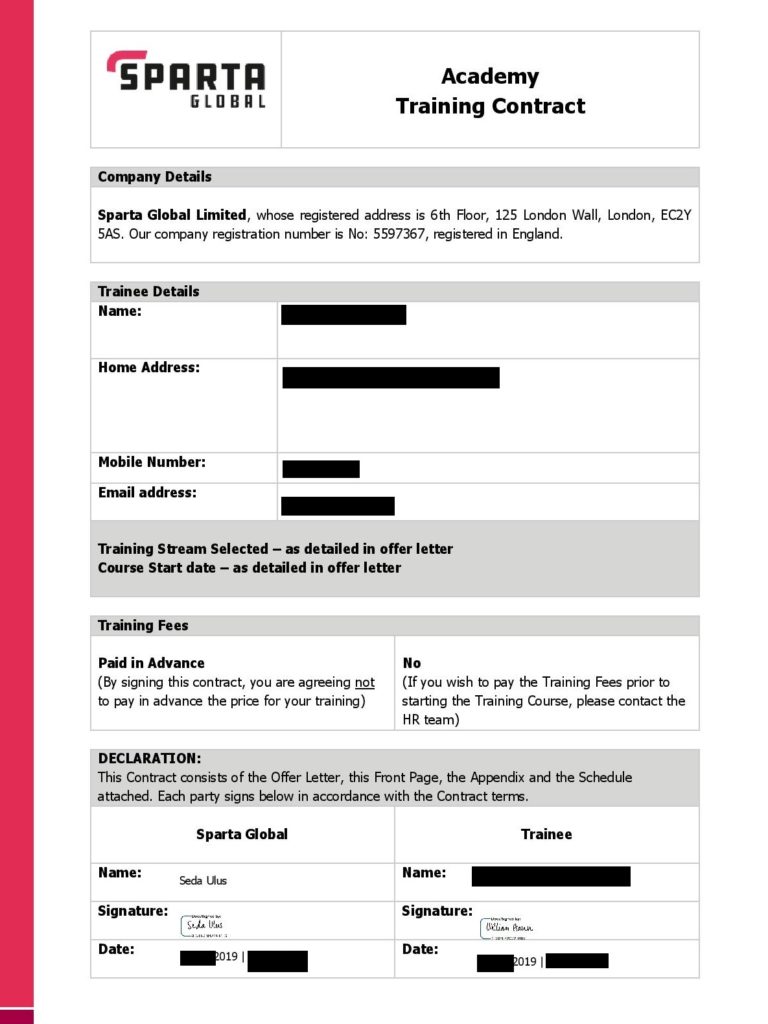 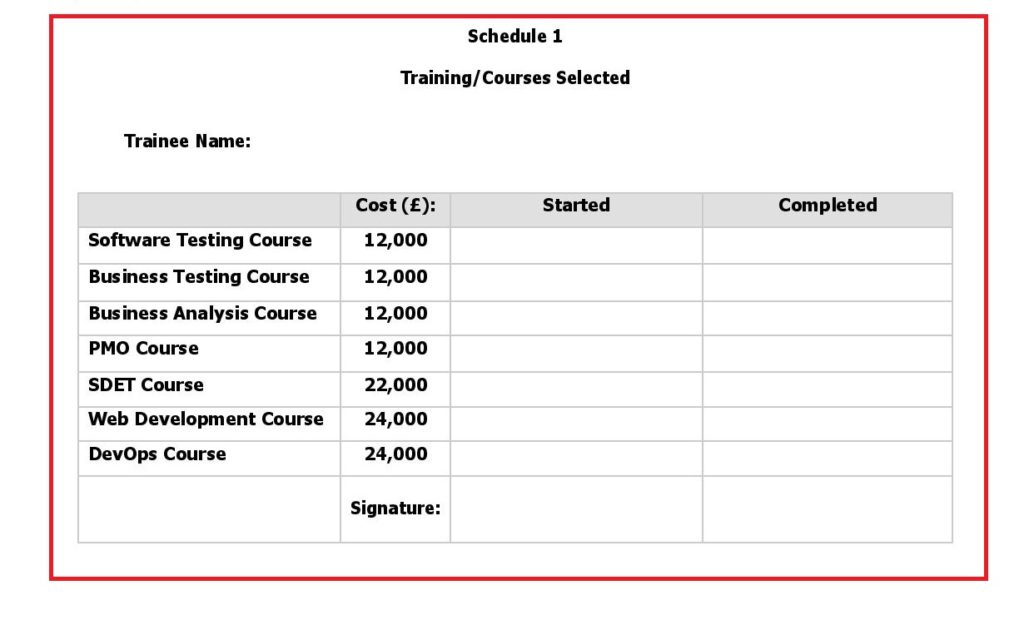 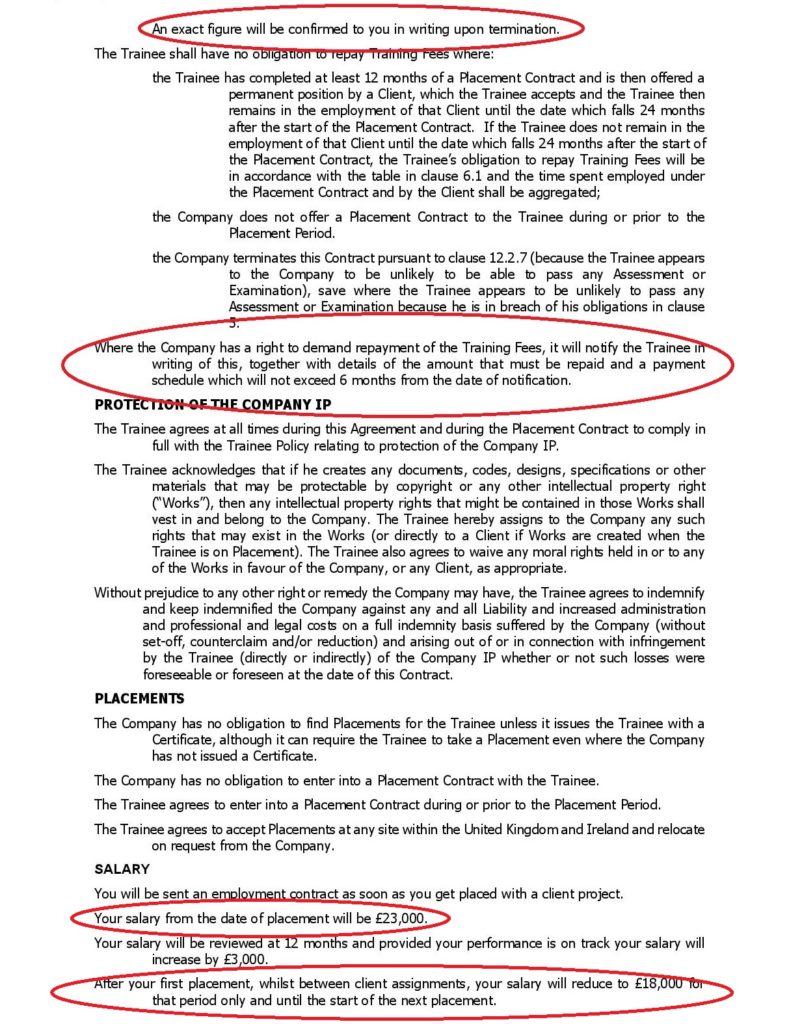 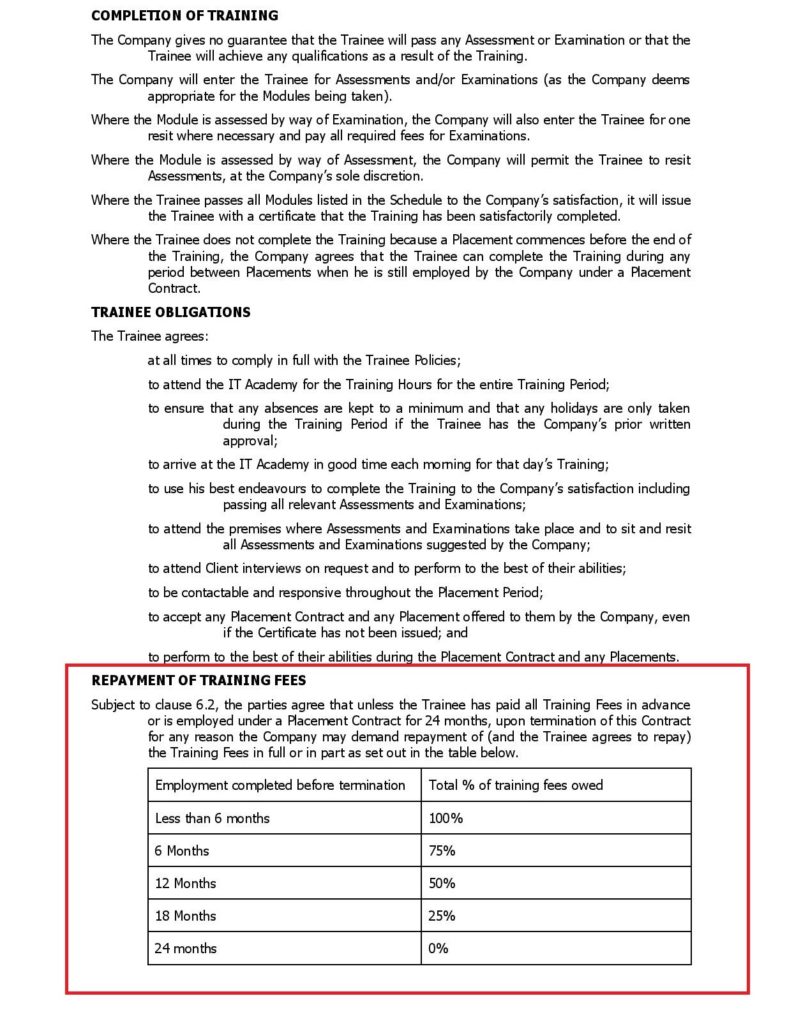