Quit making excuses and pay your interns! Our response to THAT BrokeinLondon.com advert 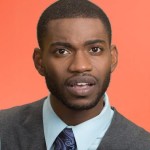 NO WAGES, NO OFFICE AND NO PROFIT – ARE YOU SURE YOU’RE RUNNING A BUSINESS, GUYS?

At Graduate Fog, we see a lot of adverts for unpaid internships. They all make our blood boil – that’s why we’ve named and shamed dozens of employers in the last few years and our stories are regularly picked up in the national press.

Oddly, when we saw this advert for an unpaid “copywriter role” at BrokeinLondon.com – a website whose ‘mission’ is to help young people struggling to survive on low incomes – our blood didn’t boil. Because we assumed it was a spoof. No-one could possibly run a website for skint city-dwellers and then post an irony-free advert for multiple four-month unpaid internships based in London, could they? Oh yes, they could. Here it is: 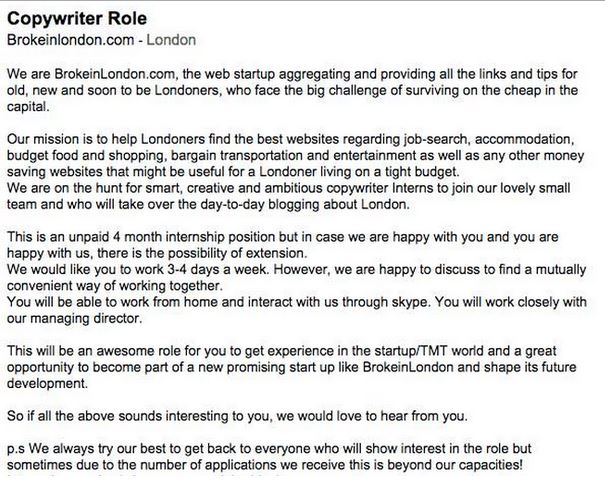 Just when we thought it couldn’t get any worse, founder Manolis Zografakis responded. He claimed the online backlash against BrokeinLondon (including tweets from calls-a-spade-a-spade author and blogger Zoe Margolis) had been “unfounded” and insisted his website is “just trying to do good”. We’re not convinced. Manolis, here’s what we were thinking when we read your statement…

As founder of Broke in London, I would like to quickly clarify all the concerns raised as a consequence of a twitter post by @girlonetrack (Zoe Margolis) regarding our unpaid internship vacancy. I totally agree with the points of Zoe Margolis regarding the exploitation of interns among several companies and start-ups (and not only) and she did really well to point it out. However, the concept of exploitation of any type of worker does not apply to our case, since so far no one who contributed to this project (me included) earned any form of salary or income. So, I’d like to spend a few words on that.

> Uh-oh… This Manolis dude is So Not Getting It.

Broke in London’s goal has always been to help all Londoners surviving in the capital. When I got the idea and started developing the website in October 2012 I used to work in other 3 jobs at the same time for almost a year in order to have the money to survive as well as to develop Broke in London from scratch (you can have a look at my story through our ‘About Us‘ section).

> That’s impressive – no-one has ever started a website from scratch before. Random strangers should definitely work for you for free now.

My dream was to create an online platform that would help all people facing the same difficulties that I did. So far, our project has been based on volunteering efforts of a team of contributors, including myself, who have been doing their best to provide a service and advice to all the students, expats and Londoners on a budget. We want to provide all the information for free and to help as many people as we can and until now we are happy to know that we have helped a lot of broke Londoners out there. I want to clarify here that all the efforts put on the website have not made any profit until now. Friends and volunteers participated in this project with passion and commitment, providing their input and gathering at the same time valuable technical skills.

Myself as well as all the team contributors have being unpaid interns several times in our lives and we know exactly the meaning of contributing without a monetary compensation especially for companies which make actual profit.

> So because you worked for free in the past, you’ll now pass the misery down to a whole new generation? Cheers for that.

If anyone looks a bit closer to Broke in London’s website will realise that we are just trying to do good here.

> Forgive us! A terrible error has been made. It is we who should apologise to you, BrokeinLondon! How you give and give and give and give… (experience, that is. Not actual money that your staff can use to pay their rent and bills and use in shops to buy boring things like food)

Most of our bloggers contribute their articles for a long time now because they like the idea behind the website and due to the freedom of our collaboration.

> You use “collaboration” in the 2014 sense here of course – to mean: “The act of persuading younger or more desperate people to work for you for free, using vague allusions about unspecified benefits at some point in the distant future.”

I am really glad and proud to be part and manage this team and at the same time I am really sad to see all this anger against a project that is trying to help and not exploit people.

> Is this still real life?

Regarding the job vacancy, here are some points to consider:

1) We never set working hours. The schedule of all our team members is super flexible: They contribute whenever they want and as much as they want.

> Wow, that’s sweet of you to be ‘super-flexible’ about how and when people work for you for nothing.

2) Being part of Broke in London involves collaborating closely in a really professional way and choosing between a large range of task in order to develop specific skills according to each candidate profile. We do need to have a selection screening of candidates, as we aim to maintain a high level of professionalism.

> Sorry, we drifted off there. Tell us again why it’s ‘professional’ not to pay your staff a wage for their work?

There is no actual working space because there is no money to have one and that is why the candidate would have to contribute from home.

> Hang on. You’re advertising a vacancy, but you can’t afford wages or an office? This has all gone very meta.

I personally (as I am the one who wrote the vacancy) would like to apologise if our advertised intern vacancy has caused any inconvenience.

> An apology! Just a shame it’s for the wrong thing. To clarify, no “inconvenience” has been caused. You misunderstand the very nature of those you have annoyed. Job-seekers have all kinds of time to slate you on on Twitter – and those who don’t will make time. Of course, you are not the only cretinous, tightwad employer out there. Unfortunately for you, your advert neatly sums up everything that’s wrong with a supposed intern ‘system’ which both exploits and excludes young people (depending on their parents’ financial situation). Combined with the irony of your website claiming to help the skint, you have the ingredients for a Twitter backlash, which is what’s happened. Bad luck.

> But surely this ‘ideal world’ could exist – if employers like you didn’t take advantage of people desperate enough to work for free. No?

…and that we should fight to make this happen in the “real” world.

> This is the real world. And we are fighting for a fairer deal for interns. We’ve been doing it since 2010 – fighting people like you. It’s turned out to be really, really hard, when all the people who should be helping us seem to be busy with other stuff (Has one politician mentioned internships during party conference season? And what is the NUS doing on internships? Anyone?). You would know this if you were part of the fight.

Broke in London’s team including my self has always been contributing without any profit.

However, all the team of contributors enjoys collaborating together for a meaningful project like Broke in London that helps people’s lives even if until now we don’t receive a financial compensation. We nevertheless managed to create a strong and passionate team and to reach out a large audience.

> When your ‘team of contributors’ says they ‘enjoy’ working for free, they’re either fibbing, or desperately hoping you might one day give them a paid position (or someone else might, with the experience they’ve gained). They’re not doing it for fun. As the founder, you can work day and night on your website for free if you want to – because it’s you who will benefit in the long-term, if the site becomes successful. Your unpaid staff will gain no such reward. See the difference?

Unfortunately, this type of negative social media attention, which builds up on unfounded opinions rather than rigorous information, does not help us at all to reach out possible funding opportunities that will help us being sustainable in the future.

> Yeah, karma’s a bitch like that. Maybe next time don’t behave like an arse? Then the internet will have no reason to hate on you with its ‘unfounded opinions’.

For any further clarification, I make myself available at manolis@brokeinlondon.com.

*GOT SOMETHING TO ADD?
What do you think of BrokeinLondon’s advert – and their response to the online outcry about it? Have your say below…