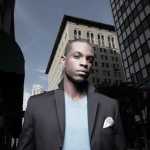 * OOH! OUR STORY PICKED UP BY THE GUARDIAN, RAW STORY AND THE INDEPENDENT! *

An unpaid Hollywood internship at a major movie studio is being auctioned for £30,000 ($50,000), offering one answer to the mystery of why there is so little diversity in Hollywood. To be clear, the winner will effectively be paying £10,000 a month to intern there.

The Weinstein Company – makers of The Imitation Game, and run by millionaire movie mogul Harvey Weinstein – has donated a three-month unpaid position to controversial New York auction website Charity Buzz, which lists the opportunity as having an ‘estimated value’ of £30,000 ($50,000). The auction closes tomorrow (Thursday) and the highest bid currently is over £16,000 ($25,000).

The ‘lot’ sits alongside a wine tasting session with Mark Wahlberg, a round of golf with Samuel L Jackson, a meet-and-greet with Lady Gaga, and the chance to meet Jennifer Lopez at the final of American Idol.

Here is the advert as it appears on Charity Buzz: 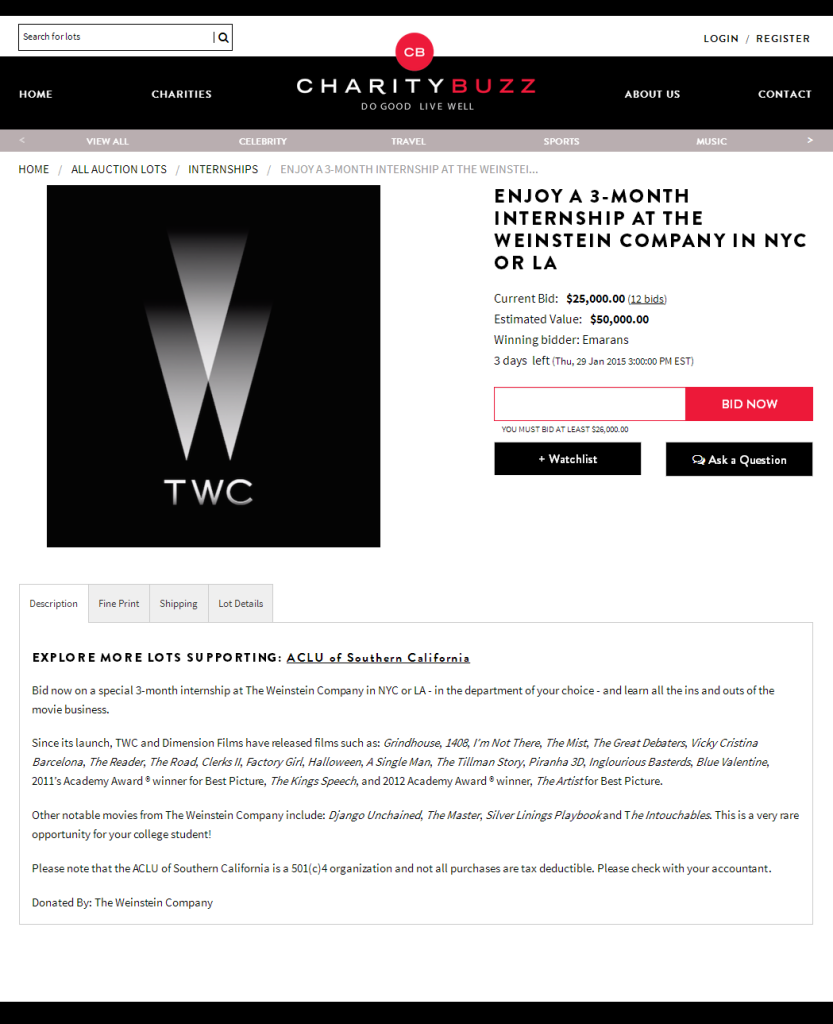 And here is the ‘fine print’ and the ‘lot details’: 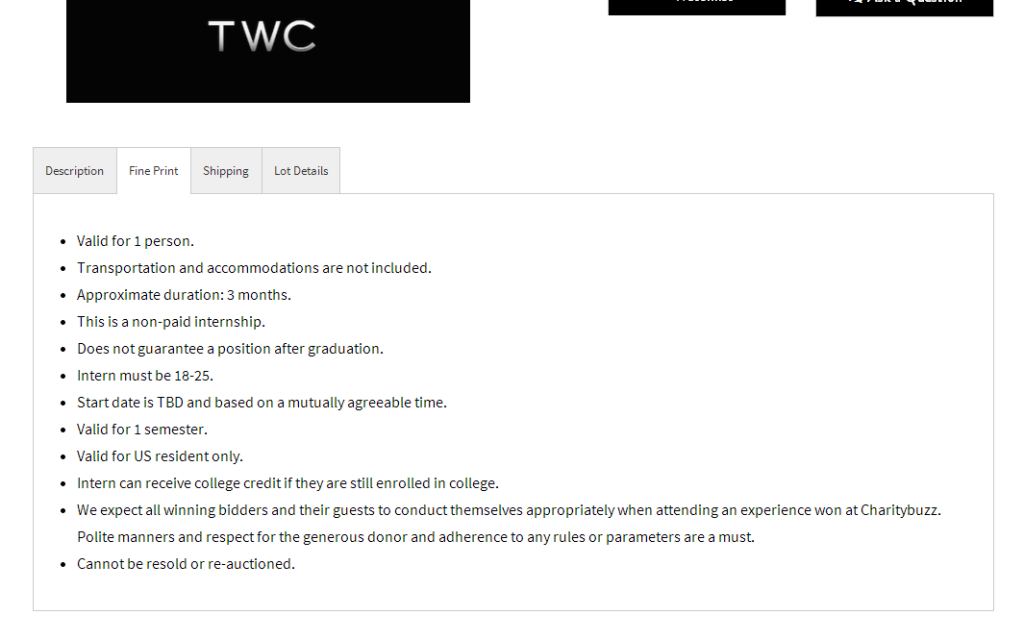 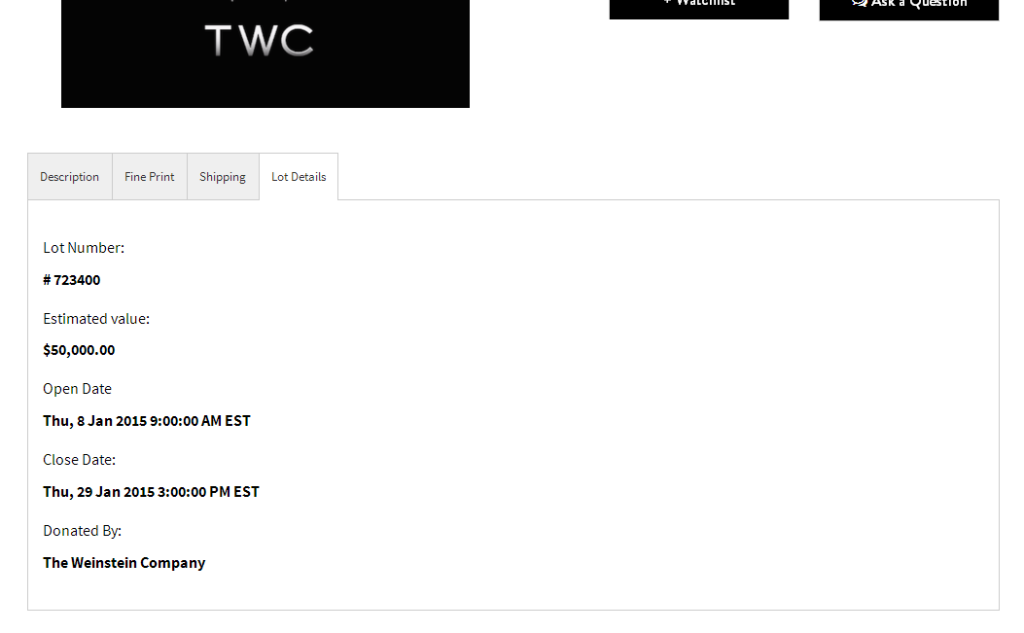 The listing states that the internship is ‘within the department of your choice’ in either LA or New York and the intern will ‘learn all the ins and outs of the movie business’. Presumably aimed at wealthy parents, the advert declares that the internship to be ‘a very rare opportunity for your college student!’ – although it appears the intern needn’t be counting the placement as college (university) credit.

What happens to the proceeds? Charity Buzz “keeps 20 percent of the net raised to cover its comprehensive services and website upkeep,” and the rest of the final bid goes to charity – in this case the American Civil Liberties Union of Southern California (ACLU).

The Weinstein Company has not responded to our request for a comment, but a spokesperson for Charity Buzz told Graduate Fog:

“Charitybuzz is an online marketplace where bidders have the unique opportunity to live out their wildest dreams while supporting the remarkable work of over 2500 charitable causes around the globe. As with all the auctions posted on Charitybuzz, internships are carefully vetted. We ensure these are positions created specifically for the auction block and they do not take away a spot from a merit-based candidate.”

Graduate Fog says: if the super-rich want to blow that kind of cash on silly, celebrity experiences and give the proceeds to good causes, that’s up to them. But auctioning serious, CV-boosting work placements that the majority of young film fans will never have access to is something quite different – even if it is for charity. The fact that valuable, career-enhancing experience like this can be bought is just not right.

Last week, Julie Walters became the latest actor to voice concerns about a lack of social diversity in cinema, and when the 2015 Oscar nominations were announced, #OscarsSoWhite began trending as movie fans noted that most of the faces on the shortlists were remarkably pale. Are careers in the Hollywood still open to everyone? It’s important to remember that we’re not just talking about acting. A lack of diversity in behind-the-cameras roles has huge implications too. After all, these are the people who decide which movies get made, who gets cast – and who deserves the awards.

Graduate Fog fears that this auction prize speaks volumes. Does nobody at The Weinstein Company think there is anything even slightly ‘off’ about this prize? Doesn’t anyone feel there is something just plain wrong about fixing a £30,000 price tag to a valuable career experience – even if it is for charity? It seems Hollywood is even more out of touch than we thought.