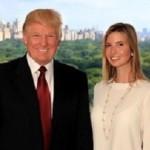 *GRADUATE FOG EXCLUSIVE! SEE WHAT HAPPENED WHEN WE CHALLENGED THIS INTERNSHIP*

* WOW! Story picked up by the Guardian, Telegraph and Independent *

Want to be Donald Trump’s intern? Nope, us neither. And that’s lucky – because we don’t have a spare $100,000 lying around to pay for the privilege.

That’s right – Republican Presidential candidate, businessman and former Apprentice star Donald Trump is seeking bids for what is likely to be one of the most expensive internships ever sold – sorry – auctioned. The estimated value is stated as $100,000 (£70,000) – and the bidding is already at $40,000, with seven days to go.

The 10-week placement at the Trump Organization is billed as a “priceless opportunity” which includes “power group lunches” with the firm’s department heads, plus 15 minutes with Trump himself.

But the advert makes clear: this isn’t a placement for super-fans. The successful candidate “Must be comfortable working in close proximity & communicating effectively with high-net worth and/or high-profile individuals.”

Their duties will include, “Assisting the primary agent with administrative & personal family responsibilities. Answering phones, running physical errands, data entry, greeting & accepting outside guests & clients. Assisting with the development & execution of charity events for The Eric Trump Foundation.” The internship will run from 6 June to 11 August, and the intern’s hours will be 10am to 4pm, Monday to Thursday.

We spotted the placement being promoted by Charity Buzz, the auction website best known for allowing wealthy donors to bid huge sums for exclusive experiences such as celebrity meet-and-greets, TV and film set visits, VIP concert tickets and – yes – internships (remember the Hollywood one with Harvey Weinstein?). While 80% of the final sale price goes to charity and the internships are (now) paid, the CV-boosting experiences have been heavily criticised for entrenching privilege – their huge price tags putting them out of reach to all but the children of the super-rich.

However, when Graduate Fog challenged Charity Buzz, a spokesperson denied that this was the case.

Instead, they insisted that the Trump internship was all about encouraging rich people to give opportunities to others, even if those people were also, er, rich. Or something. No, we didn’t get it either. Here’s what they said:

“It is most certainly not our intention to “entrench” privilege but rather to encourage those who are privileged to give to others and to provide as many opportunities as possible for them to do so.”

Anyway, here is the advert: 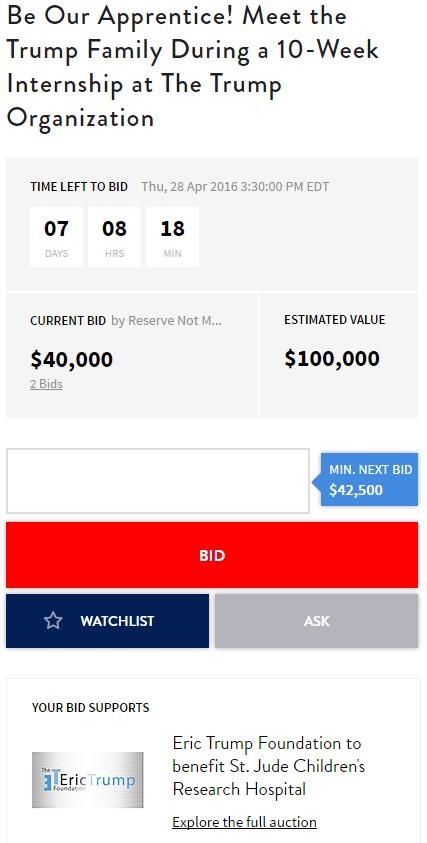 Charity Buzz has told Graduate Fog in the past that the 20% that it keeps is to cover “comprehensive auction services for the nonprofit, including securing items and experiences, marketing, promotions and social media, shipping and reconciliation, web site design and collateral design and more.” If the Trump internship sells for $100,000, Charity Buzz stands to scoop $20,000. 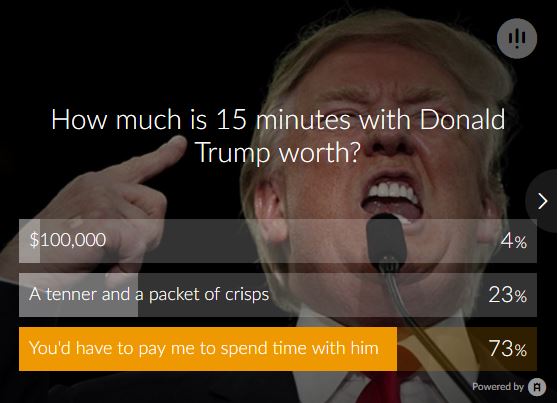 How the Telegraph’s readers reacted to the internship’s price tag CREDIT: Daily Telegraph

We emailed Charity Buzz, asking them to justify the price tag on this internship, and whether it was fair that it is only available to kids with super-rich parents:

I am writing regarding the internship with the Trump family, which I saw posted on Charity Buzz yesterday.

While I am pleased to see that the placement is a paid opportunity, I am concerned that the huge sum that the winning bidder is expected to donate ensures that this remains an extremely exclusive (and excluding) internship, available only to the children of the very rich.

Please can you clarify how you justify keeping such a CV-enhancing opportunity out of reach from the vast majority of those young people who would benefit from it? As I’m sure you’re aware, very few families have a spare $100,000 lying around to buy their children such an expensive opportunity, even if the money does go towards a good cause.

To many, it will seem as though Mr Trump and his family are simply entrenching privilege among people from backgrounds similar to their own, locking out everybody else.

I will be blogging about this later today and am based in the UK so I would appreciate as swift a response as you are able to supply.

At 6pm (UK time) on 20 April, a representative replied:

Hi Tanya,  I understand your frustration.  The goal of  our auctions, however, is to raise as much money as possible for amazing charities who are making a difference.  In this case, it is the Eric Trump Foundation who are extremely dedicated to raising money for terminally-ill children at St. Jude Children’s Research Hospital in Memphis, Tennesse [sic] and as such are offering an internship to meet this goal.  St Jude is an extraordinary pediatric [sic] treatment and research facility who desperately need funding in order to treat children with cancer and other diseases and continue their research work.  Our sister platform, www.prizeo.com, is also part of The Charity Network.  Prizeo offers extraordinary experiences to benefit charities but do so in a sweepstakes model that is more affordable.

Hm. Not very impressed, we wrote back:

I appreciate that this auction is for a good cause. However, I’m afraid I don’t feel you have answered my questions.

Does Charity Buzz not feel that internships like this are entrenching privilege? Or do you feel that the charitable donation is large enough to cancel out or offset this?

That is when the spokesperson replied:

“It is most certainly not our intention to “entrench” privilege but rather to encourage those who are privileged to give to others and to provide as many opportunities as possible for them to do so.”

How $100,000 internships for the super-rich fit into Trump’s plan to ‘Make America Great Again’ remains unclear.

* IS THE DONALD TRUMP INTERNSHIP ELITIST?
Is it fair that this opportunity is only open to students whose parents won’t miss $100,000? Or is it justified as it means a large donation will go to charity? Have your say below…