Have a word, Ed! Labour MP caught paying interns £4 a day after party pledges to help the low-paid 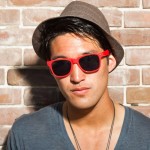 PARTY’S ACTIONS MUST BE CONSISTENT WITH THEIR PROMISES, SAYS GRADUATE FOG

A Labour MP has been found to be paying his interns just £4 a day, apparently conflicting with a pledge made last week by Ed Miliband to tackle the problems of low pay and unpaid internships.

Graduate Fog is today asking Ed Miliband to ensure his own MPs’ actions are consistent with the party’s promises. Last week, we were impressed that the Labour leader spoke out on the sticky issues of low paid work and unpaid internships, promising to increase the minimum wage and tweak the law so that so that interns working for more than four weeks are automatically entitled to the minimum wage, if he is elected next month.

However, it seems Miliband may need to start with his own MPs. Today, the Sun has reported that Toby Perkins, MP for Chesterfield and deputy chairman of the Labour election campaign, has been paying his campaign volunteers just £4 per day for 12-hour days.

Clearly, this is not a great moment for Ed Miliband’s campaign – and it’s obvious that he needs to have a word with Mr Perkins. But Graduate Fog feels that the response to this story has been disproportionate. (Front page of the Sun? Really?). 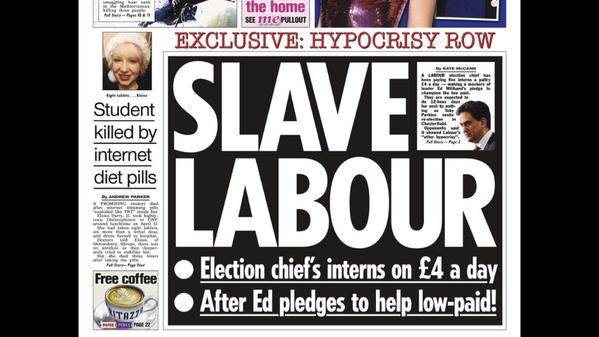 Over the top? The front page of today’s Sun

We have been following politics internships for five years now, and we have concluded that attitudes towards unpaid work are deeply ingrained, as in the fashion industry. A serious culture change is long overdue.

We have found MPs of all three main parties using unpaid interns (often called ‘campaign volunteers’). And we can say that Labour are the least bad (!). When we wrote about this back in February, the Conservatives were by far the most prolific advertisers of ‘campaign volunteers’. And it is Lib Dem MP John Leech who holds the crown for advertising the most unpaid internships (nine), which is why we reported him to HM Revenue and Customs.

The Labour Party has been by far the strongest supporters of the work of those of us who campaign on this issue. Ed Miliband, Hazel Blears, Stella Creasy, Liam Byrne and Andy Burnham have all pledged their support publicly.

They may not be perfect – and they definitely need to work on their consistency. But Labour is still by far the party that has done the most to support interns’ rights in the UK.

*ARE YOU DISAPPOINTED IN LABOUR?
Did the Sun’s story expose hypocrisy in the Labour Party’s election campaign – or is it just a sign that Ed Miliband needs to educate his own party better on the issue of unpaid work? Which political party do you think has done the most for interns so far – and should they all do more?