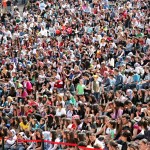 OUR TRIBE IS EXPANDING FAST – THANK YOU!

Today Graduate Fog announces news of its 10,000th visit – since the site went live just three and a half months ago!

Since I don’t have a bean to spend on advertising and PR, I’m assuming this is all down to you lot?

Have you been busy spreading the word about the fun and games (and almighty bitch-fights) we’ve been having on this site?

If so, THANK YOU!

In particular, an extra special thank you to those of you who have:

– joined in with the debate by posting a comment (whether you agreed with me or not!)

– told one, ten or 100 people about Graduate Fog

– emailed me to say how much you love the site. It’s good to know I’m getting it right (at least some of the time!)

Running Graduate Fog is loads of fun for me – but my favourite days are definitely those when I feel we’re getting to the crux of a debate that has been hushed up for too long, exposing a new scandal or squaring up to the ‘big guys’.

This seems to be what you like too, as the five most popular blog posts have been:

1) Cool jobs your careers adviser doesn’t even know about

2) How to choose your career

4) How to find vacancies

5) How to get into media

And finally, here are some more stats that I love.

(Hardly surprising, since most of our blog posts cover UK based stories and all Graduate Fog’s publicity has been in the UK press).

However, the next most-visiting nation is…

Wrong again – Australia is fourth, with 1%.

Okay, you’ll never get it, so I’ll tell you…

The second most-visiting nation is…

I have no idea why our site should be such a disproportionately big hit in Portugal, but I am thrilled to see that Graduate Fog’s appeal translates across the language barrier!

Does anybody know how to say ‘Graduate Fog welcomes our friends from Portugal!’ in Portuguese?