Tony Blair employee slammed for suggesting interns should be paid 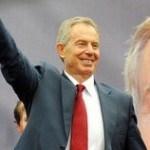 A former employee at the Tony Blair Faith Foundation has said that voicing his concerns about the number of unpaid interns working there “did not go down well”, despite the organisation’s lavish spending on luxury central London premises and a large (paid) PR team to protect its reputation.

Graduate Fog was the first to expose Tony Blair’s use of unpaid interns back in 2011, when we discovered an advert for a three-month internship at the Tony Blair Africa Governance Initiative, paying expenses only.

We later discovered that the former Prime Minster also had unpaid workers in his private office, a story that went global and was even featured on Have I Got News For You. Following public outcry and the threat of an official investigation by HM Revenue and Customs, Blair’s staff agreed to provide a wage to all interns working for three months or more in his profit-making businesses. (Better than nothing – but he still earned his place with dozens of other villians on the Graduate Fog Ultimate Wall of Shame, including Simon Cowell, Sir Philip Green and Jeremy Hunt).

In a lengthy first-person piece in yesterday’s Mail on Sunday, Martin Bright (former website editor at the Tony Blair Faith Foundation, who has previously worked for the Guardian and the New Statesman) wrote:

In my time there, I found much that felt fittingly familiar in a sofa-government sort of way: there were bean bags; young, enthusiastic staff; morale-boosting doughnut breaks and occasional ‘Town Hall’ meetings to get things off our collective chest.

But plenty that was more puzzling — or frankly weird.

Why, for example, did a small interfaith advisory group need ritzy offices in a West End tower block?
Why did it need no fewer than five press, or ‘comms’, officers recruited from the ranks of special advisers and Downing Street insiders?

…The use of unpaid interns was another real concern. I was unhappy to work alongside people who were working unpaid, but was assured a review was under way.

My suggestion that people should be paid for their work did not go down well. I was told I needed to get a better understanding of the charity’s ethos.

One senior manager even suggested that academics should be asked to work ‘pro bono’.

Graduate Fog is disappointed to hear that any of Tony Blair’s organisations are still using unpaid interns, after all our campaigning. It should be remembered that it was Blair’s government that introduced the minimum wage law in 1998, a change many experts believe to be the most successful government policy of the last 30 years. While charitable organisations need not pay their interns (thanks to a legal loophole which many feel is being exploited), there is growing concern that their failure to offer a fair wage is effectively locking out thousands of young hopefuls from careers in the charity sector, simply because they can’t afford to work for free for months when starting out.

*SHOULD TONY BLAIR PAY HIS INTERNS?
What do you think of the description of working life at the Tony Blair Faith Foundation? Is it wrong that a charity should spend huge sums on fancy offices and PR, while not paying their junior staff a wage they can live on? Or is it right that charities shouldn’t have to pay their interns?